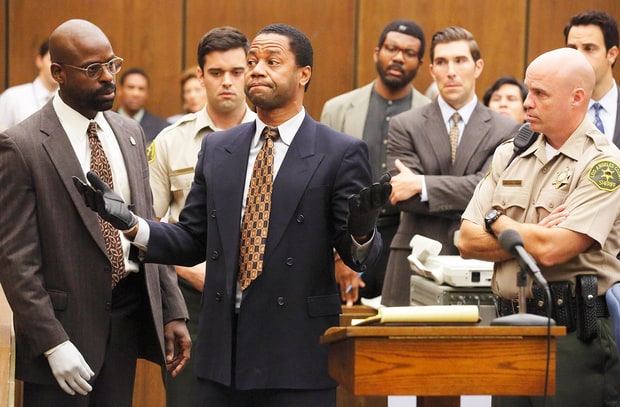 The titles of the past few episodes of “American Crime Story: The People v. O.J. Simpson”, “The Race Card”, “Marcia, Marcia, Marcia”, and “Conspiracy Theories”, suggest just about everything you need to know about what’s happening in the show. Unfortunately due to work conflicts, I’ve missed the opportunity to post a review the last couple weeks, but this week, I’ll highlight what I’ve missed, as well as taking a look at Tuesday nights episode, “A Jury In Jail”.

As the trial of O.J. Simpson continues to develop in the show, one of the biggest themes is race. Simpson is African American, as is his head lawyer, Johnnie Cochran, along with one of the opposing counsel, Christopher Darden, and a good portion of the jury. To understand how Simpson was ultimately acquitted of a double homicide, it’s important to understand the reality of the world at the time of the trial and specifically how it viewed and treated those of a different race.

Episode 5 starts out with Cochran being pulled over with his kids in the car and being treated poorly by the police officer, until he quickly discovers who Cochran is and changes his attitude. Apparently, an African American driving a nice car in a nice neighborhood warrants suspicion by the white officer. After the officer leaves, Cochran’s daughter asks if the officer had used the “N” word (fully said multiple times in the show) to describe Cochran, in which Johnnie says, “No, he didn’t… he didn’t have to. But that is an ugly word”.

While the issue of race continues to play a larger role in the trial, Darden requests that both sides refrain from using the “N” word in court, but a heated Cochran objects and appears to put Darden in his place during the opening statements, even going as far as to refer to Darden as “Uncle Tom” and a betrayer of his own race. Darden and Cochran continue their feud in and out of the courtroom, and at some point during the beginning of the trial, prosecutor Bill Hodgman has a heart attack while in mid-sentence, causing Clark to appoint Darden to be her co-lead prosecutor.

Towards the end of the episode, there is a tour of Simpson’s house by the jury, judge, defense and prosecution, etc.  The defense completely redecorates O.J.’s house with pictures of his family, a display of his sports awards and more, to make him seem more appealing and get sympathy from the jury. The misrepresentation completely angers the prosecution, and in closing, Darden is very worried about putting Detective Mark Fuhrman on the stand, who at quick glance sounds okay, but to Darden, is as a disingenuous and potentially white racist.

While the riveting murder trial of O.J. Simpson continues, this episode is all about Marcia Clark. It features the much-anticipated Fuhrman testimony and further scrutiny of the police department for their handling of the evidence (one detective takes the evidence home for the night before filing it the next day), as well as other testimonies from Nicole Simpson’s sister, Denise (played by Jordana Brewster), and the neighbor’s housekeeper, Maria Lopez. Through all of this, it’s the Marcia Clark show, and by the end of the episode, you might even feel bad for her.

From a child custody battle with her ex-husband to a naked picture from her first marriage that surfaces to the continued ridicule in the media for her looks and more, it seems like one thing after another happens to Clark. Even through all of the bad attitudes and her generally negative/gloomy persona and despite which side you are on, Marcia Clark is still a person with feelings, and she finally reaches a point when the public scrutiny and pressure of the case becomes too much.

Another big part of this episode is when Lee Bailey for the defense is questioning Fuhrman and actually uses the “N” word to ask him about his feelings towards African Americans. It furthers the race issue and even hearing the word said out loud clearly causes the jury and everyone else watching to shift their focus and only remember one thing from that day, associating Fuhrman and the police with the racist term.

Each week, this show continues to show how well put together it is and how fascinating this trial is. Passionate acting, a compelling and well-written story, quality directing and more, each episode is varyingly as good or better than the next. In the latest episode, entitled “Conspiracy Theories”, theories of who killed Nicole continue to fly around, and even O.J.’s closest confidants have to ask themselves, if not O.J., then who?

As the episode begins, we quickly see that Clark has changed her hair once again, this time looking a bit more normal. While the day’s court session goes on, Alan Dershowitz (Evan Handler), a consultant of the defense, appears to be teaching a law-related college class. Before long, he has an idea and sends a fax to Cochran in court, who can be seen reading the fax shortly after on live TV and following through with Alan’s recommendation to ask the witness about a “Columbian necktie” in hopes of showing that Nicole’s murder could be drug or gang related.

Throughout the episode, Darden and Clark grow closer by taking a weekend trip to celebrate a friend’s birthday, Cochran’s past marital indiscretions come to light, the prosecutors find a receipt that suggests Nicole purchased the black gloves that are part of the investigation, and Shapiro continues to butt heads with those around him. He tries to scare Robert Kardashian into pushing for O.J. to take a deal and ultimately has an argument with O.J. where Simpson tells him to shape up.

One of the biggest parts of the episode comes towards the end when it’s time to examine the gloves in court. The idea of making O.J. try them on for the jury floats around, seemingly having both positive and negative repercussions depending on whether they fit or not. Finally, the defense tricks Darden into pushing for O.J. to try them on, and although O.J. wears latex gloves underneath, the black gloves in question ultimately appear to be too small, which looks good for the defense.

Like most episodes of this show, each title reflects in short what the main focus of that episode is, be it the race issue, a specific character or topic, or in this case, the jury. In this episode, the viewer gets a deeper glimpse into what it was like to be a juror during this case and specifically how many issues arose for the court and the jury during the trial.

The episode begins with a future scene showing the jurors complaining to their police escorts about their conditions, and before long, it flashes back to the early parts of the trial just after the jurors have been selected. They are asked to stay in a hotel for the duration of the trial, which at the time seems like only a few weeks at most, but later turns into more then 130 days. Their hotel room TV’s have been removed, they are not to use the pool area, they cannot talk to anyone else, including other jurors, about the case, their reading material is strict, and generally being a juror in that situation for such a lengthy time period looks to be is tough.

As the episode catches back up to where the previous week left off in the trial, the issues with the jurors are only getting worse, and in the meantime, both the defense and people’s side begin to raise questions about certain jurors who apparently lied on their survey when asked if they had been involved in a domestic dispute at any point in there lives. Between past arrests and the rumors that some are attempting to use their jury seat to write a book on the trial, we see one juror after another get thrown out and an alternate brought it, which clearly shakes up both sides' original idea of what the jury looked like.

In addition to the jury problems, it’s the part of the trial in which the court discusses the DNA that was found at the murder scenes, Simpson's house and Bronco. A DNA specialist tells the court that other than the victims DNA, there is no doubt that the most of DNA comes from a single person, which he identifies as O.J. Simpson. This raises a lot of concerns, even for friends of Simpsons like Robert Kardashian, who struggles with wrapping his mind around the clear evidence that only points to one person. With all this info, how could Simpson be innocent?

The last scene in the episode shows a call to the O.J. Simpson tip line, where the person answering the phone writes down on a piece of paper that someone has recordings of Detective Mark Fuhrman saying “frame” and the “N” word plural. Then it fades to black and the credits roll.

Like most episodes, “A Jury In Jail” highlights a specific topic or person, in this case the jury as a whole, while juxtaposing the progression of the trial. In my opinion, this gives the show a bit more material to work with, keeps the show fresh instead of only showing the trial, and also gives audiences a deeper look into some of the people and issues associated with the trial that viewers may have never seen before. This show is truly impressive, from story telling to acting and more.

You can catch “American Crime Story: The People v. O.J. Simpson” on FX on Tuesday evenings, and if you missed an episode, you can watch all the ones to date at http://www.fxnetworks.com/shows/american-crime-story/episodes.

Written By
Hayden Pittman
More from Hayden Pittman
Now that you've watched a cool trailer, it's time for some real talk....
Read More