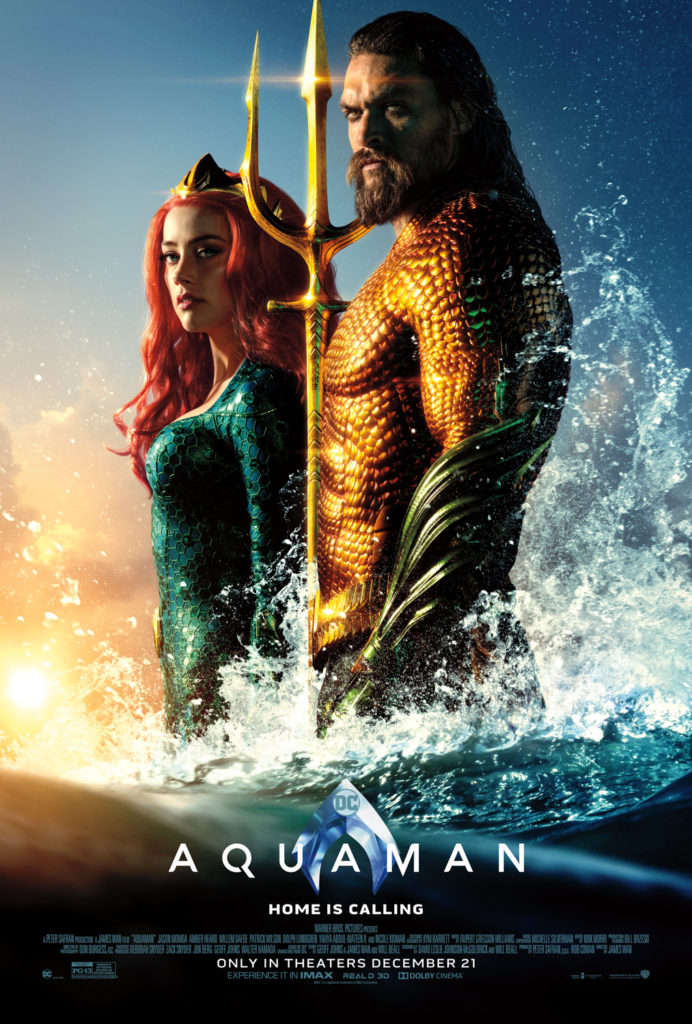 AQUAMAN – A Review by Cynthia Flores

Not since the great Marilyn Monroe has anyone looked so good coyly glancing over their shoulder to the audience and then slowly turning around and giving us “that look” to make the audience gasp at their raw sex appeal.  In Aquaman, that person is Arthur (Jason Momoa), and he knows how to play to the camera.

This new film from director James Wan brings another DC Comics hero to the big screen.  This time it’s Aquaman in his origin pic, so it’s a little long but with so much action and backstory packed into the film, the time goes by quickly.  We meet Arthur Curry / Aquaman, the half human, half-Atlantean, when he is grown and must go on the journey of his lifetime with Mera (Amber Heard), princess from Atlantis.  This odyssey will not only force him to face who he really is but to discover if he is worthy to be the king he was born to be.

I don’t want to give every plot point away because I want you to go to the theaters and watch this on a big Imax screen to enjoy the stunning visuals they have created for these kingdoms of the sea.  Just know that you’ll find out how Aquaman, son of human Tom Curry (Temuera Morrison), who was a lighthouse keeper and Atlanna (Nicole Kidman), the daughter of a king from Atlantis, was raised and trained by his mother’s trusted advisor Vulko (Willem Dafoe) to one day be king.  Now, because Arthur’s half-brother (but full-blooded Atlantian) King Orm (Patrick Wilson) wants to join all the underwater kingdoms together under him to attack the humans that are polluting and killing the sea.  Because Arthur is human as well, he’s pulled into action below the water and with the help of Mera and Vulko he goes on the quest to find and claim the Trident of King Atlan which is said to hold all the power of Atlantis and can only be used by a true king.

Side note here, Nicole Kidman and Willem Dafoe are no spring chickens however the computer work that was done on them to play their much, MUCH younger parts is a little creepy at times.  I swear that you can’t take your eyes off their faces when they are on screen because you expect them to fall off at any moment.  They almost have the technology to let any actor play any age they want, but it’s not 100% there yet.

I’m surprised that they chose to release Aquaman now instead of in the summer, but I’m so glad they made this feast for the eyes superhero flick.  It has all the traits of most superhero movies, there are lots of bloodless violent scenes, blood oath vendettas, potential love blooming, and snarky one-liners.  What Aquaman has that no one else does is Jason Momoa, one of the hottest looking, long-haired heroes in dripping wet muscle defining outfits giving you “That Look” totally worth the price of admission just for that.  I give this film a B+ rating.