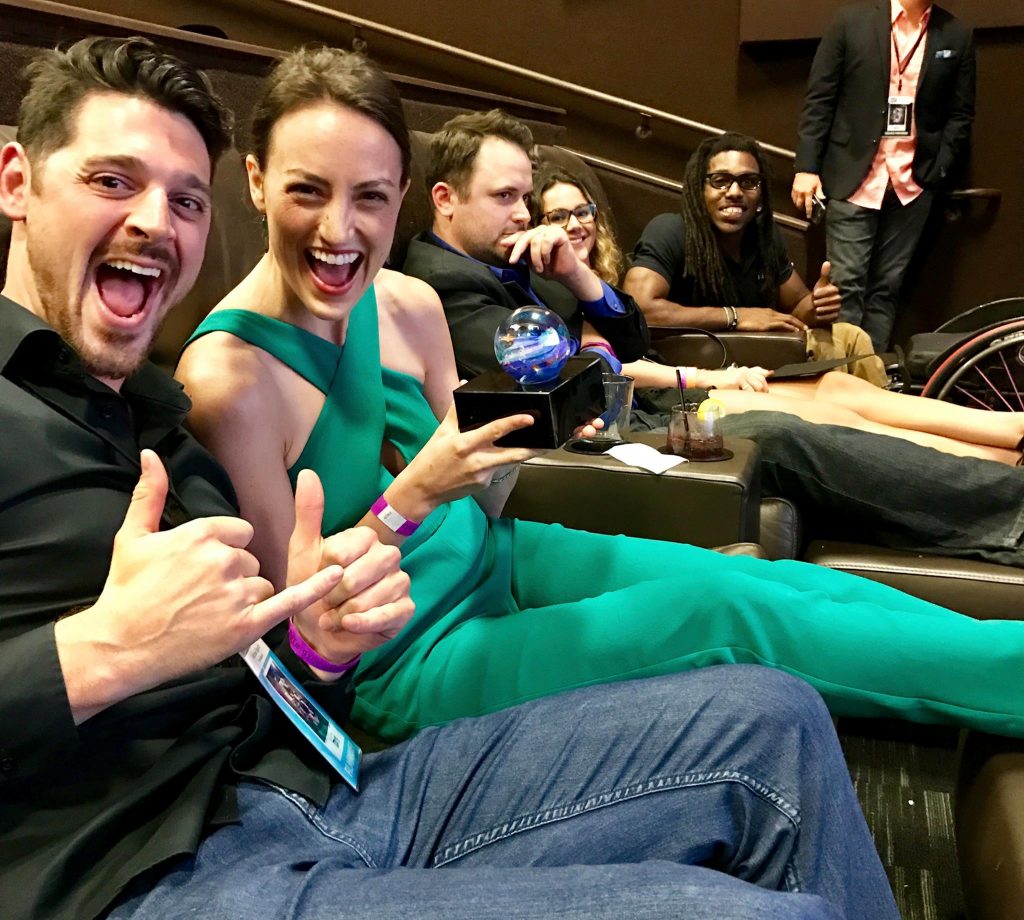 Call for entries is now open for the 2021 Naples International Film Festival (NIFF), which will take place October 21-24. The 13th iteration of the popular regional film festival, a MovieMaker Magazine “Top 25 Coolest Film Festivals in the World” selection in 2019, will likely follow last year’s hybrid in-person and virtual presentations format, with plans for an updated approach which will once again feature independent and international films with a spotlight on diversity. While details regarding the specific formats of those presentations have not been determined, they will be underlined with the signature NIFF “fun-under-the-sun” style that has made the festival a destination for filmmakers, industry vets, influencers and film fans, whether in-person or virtually. The deadline for early-bird submissions is June 11, and the final deadline is July 23, 2021.

In addition to a robust virtual festival, NIFF was one of the few film festivals last year that was able to offer limited in-person screenings thanks to the Artis—Naples Kimberly K. Querrey and Louis A. Simpson Cultural Campus, which allowed for the open-air, under-the-stars presentation of films for a live audience in Norris Garden on a 24-foot outdoor screen. For the 2021 festival, NIFF will once again combine the pragmatic spirit of independent film with the artistic eye and resources of an acclaimed multidisciplinary arts organization.

“In 2020, NIFF faced the same challenges that all film festivals faced,” said Festival Producer Shannon Franklin. “However, we enjoy the great benefit of being a part of Artis—Naples. NIFF is unique in that we not only champion independent film and artists, we emphasize their placement next to – and as part of –the visual and performing arts that Artis—Naples celebrates throughout the year.”

In 2021, filmmakers will be vying for more than $10,000 in cash prizes, including $2,500 each for the two juried competitions for Best Narrative Feature and Best Documentary Feature, and $1,500 for the Focus on the Arts Award, given to a Narrative or Documentary film with an emphasis on one or more of the visual or performing arts.

“The Naples International Film Festival places an emphasis on supporting our filmmakers in every way we can beyond our deep appreciation for the films we select each year,” says David Filner, Artis—Naples Executive Vice President Artistic Operations. “This support for filmmakers has become even more important during the last year, for obvious reasons, and we feel that NIFF can help provide important encouragement for the art of independent film. The prize money we award to our winning filmmakers is a key part of that, but it extends to other factors as well. We also place a premium on connecting filmmakers with each other, whether in-person or virtually, and by exploring different ways to share their films with more people. Last year, by showing films to live audiences in a safe, outdoor environment while also reaching virtual audiences throughout the state of Florida, we demonstrated that even during a pandemic we will be as creative and forward thinking as we can be in finding ways to share great films with our audiences.”

Narrative Features: Any original work of fiction 41 minutes or longer. Narrative feature films may be foreign or domestic.

Florida Films: The Florida Films category is intended to celebrate, encourage, and support Florida filmmakers and the production of films in the state of Florida. Documentary Feature, Narrative Feature, or Short films must either include a filmmaker (director or producer) or cast member (leading actor/actress) from or currently living in Florida and/or have partial or principal photography shot in Florida.

Student Filmmaker Showcase, K-12 Division: Student filmmakers in the United States, currently enrolled in grades K-12 (as of April 1, 2021), are invited to submit a short film with a running time of 10 minutes or less (including credits) completed any time after January 1, 2019. Films of all genres are accepted (documentary, narrative, and animation). There is no premiere requirement for this category. Limit 1 entry per director. Films submitted in the Student Filmmaker Showcase category must be works written, directed, and shot by students. Adult participation is limited to an advisory capacity. APPLICANTS MUST SUBMIT PROOF OF AGE WITH THEIR SUBMISSION. Please indicate the school you are attending and send a photocopy of your current student ID, driver license, or ID card to [email protected]

Student Filmmaker Showcase, College/University Division: College and university students currently studying in the United States (undergraduate or graduate) are invited to submit narrative, documentary, or animated films with a running time of 40 minutes or less (including credits) completed any time after January 1, 2019. Films of all genres are accepted (documentary, narrative, and animation). There is no premiere requirement for this category. Limit 1 entry per director. Films submitted in the Student Filmmaker Showcase category must be works written, directed, and shot by students. Adult participation is limited to an advisory capacity. APPLICANTS MUST SUBMIT PROOF OF AGE WITH THEIR SUBMISSION. Please indicate the school you are attending and send a photocopy of your current student ID, driver license, or ID card to [email protected]

Home of The Baker Museum and the Naples Philharmonic, Artis—Naples is unique among cultural institutions nationwide, equally dedicated to both the visual and performing arts featuring artists of global distinction.

Led by CEO and President Kathleen van Bergen and Sharon and Timothy Ubben Music Director Andrey Boreyko, we typically offer audiences more than 800 paid and free events annually within a variety of venues and settings situated throughout the 8.5-acre Kimberly K. Querrey and Louis A. Simpson Cultural Campus. Artis—Naples welcomes thousands of visitors each year for a broad array of artistic and educational opportunities perfect for audiences of all backgrounds and interests. The Kimberly K. Querrey and Louis A. Simpson Cultural Campus is home to five buildings, including two performance halls (Frances Pew Hayes Hall and Myra J. Daniels Pavilion), The Baker Museum, the Toni Stabile Education Building and the Kohan Administration Building.

In the 2014-15 season, Andrey Boreyko assumed the title of Music Director and serves in this capacity for Artis—Naples. Boreyko is internationally recognized as one of the most exciting and dynamic conductors working today. This appointment, extended through 2022, marks his first American post.

The Wall Street Journal says van Bergen and Boreyko have ushered in “an impressive new phase” for classical music in Southwest Florida.

The Naples Philharmonic has long been recognized as one of the cornerstones of Southwest Florida’s arts community. As part of Artis—Naples, the Naples Philharmonic typically performs more than 140 orchestral and chamber music concerts, as well as opera and ballet, education, community and special event concerts annually between September and June in the 1,477-seat Hayes Hall, the 283-seat Daniels Pavilion and around the Southwest Florida region.

The Baker Museum is one of the foremost fine art museums in Southwest Florida. The museum hosts several traveling exhibitions annually to complement installations of works from its permanent collection. Comprising more than 4,000 objects, the museum’s broad holdings of 20th and 21st century art reflect the generosity and commitment of area collectors. Of particular strength are The Baker Museum’s collections of American and Mexican modern art and significant gifts from the personal collection of Olga Hirshhorn.

With almost two decades of collecting and exhibiting, the museum is dedicated to stewardship and scholarship from both its growing permanent collection and outside sources. At the same time, The Baker Museum seeks out the best traveling exhibitions from the leading arts institutions in the world—including recently the Crystal Bridges Museum of American Art, Smithsonian Institutions and École des Beaux-Arts, Paris—to enrich the Southwest Florida community.

The Baker Museum exhibitions reopened to the public on December 1, 2019, after being closed for more than two years in the wake of Hurricane Irma. The repair of the museum was paired with a simultaneous expansion of the building to the south, which created new spaces for multidisciplinary exploration and social interaction.

In addition to creating and presenting visual and performing arts, Artis—Naples provides robust education and community activities for students of all ages. Typically, thousands of Collier County Public Schools interact with Artis—Naples education programming each year both on its cultural campus and in classrooms. The Lifelong Learning program provides engaging lectures and study opportunities for adults seeking to engage more deeply with the arts.

The Friends of Artis—Naples, with more than 4,000 households who give more than $75, offers activities, travel experiences and events geared toward creating a deeper relationship between patrons and the arts.

In 2017, Artis—Naples acquired the Naples International Film Festival (NIFF), expanding its film offerings and providing a platform for the festival’s continued excellence and growth. In 2018, NIFF celebrated its tenth year in the community, and in 2019, NIFF was named one of MovieMaker Magazine’s Top 25 Coolest Film Festivals in the World.