Aaron Sorkin’s dive into the film world has truly changed the notion of pacing and immersive story telling.  In BEING THE RICARDOS we are once again given something untold and unique about iconic figures from the iconic writer/director.

BEING THE RICARDOS isn’t necessarily what you’d expect from a bio pic of Lucy and Desi Arnaz.  Sorkin delves directly into a specific week in the filming of the I LOVE LUCY show.  We are treated to a behind the scenes fill as the movie opens with the writers of the famous show discussing their memories of that specific week.  As we take the jump back in time to the set and behind the scenes of the readings, writer’s room activity, and even major studio meetings at NBC we see all aspects of this week.  There are two tabloid style stories out that week.  One involves potential photos of Desi Arnaz cheating on Lucy and the other is a tie of a young Lucille to possibly being a member of the communist party or at least a socialist party.  Both stories maybe devasting to the tremendous success of Lucy and her wild Cuban Hubby’s epic show.  The Arnaz weight in their creative process mingling with the impact of Big Tobacco (a major sponsor) and of course the Studio itself not wanting negative publicity of it’s famous show is the massive trifecta of the tale.  Sorkin has an amazing ability to tell a large important story about a small specific set of moments or in this case a week in the life of Lucy and Desi.  The story is so eye-opening and forgotten the film is worth just finding about this week in time.  Add in the pacing of Sorkin in which a character’s legs move as fast as their tongue.  Walking and talking Sorkin is a treat on the small or big screen.  In the hands of this cast Sorkin’s biting commentary is superbly done.  JK Simmons and Nina Ariande battling moments are worth their own sitcom of the sitcom their characters were so famously the other couple.   Tony Hale steals every scene he is in and really showcases a huge internal battle that the Arnaz family dealt with even though they were so successful in their business prowess in the system world of the 50s and 60s.  Alia Shawkat is also a real gem in the film and she has one scene with Nicole Kidman that should scream to all woman making film and tv!

But Being the Ricardos comes down to Nicole Kidman as Lucy and Javier Bardem as Desi.  Both are utterly captivating and deliver A+ performances.  It will be hard to find fault in their performances especially Bardem’s loose feel in flashback scenes.  He has the IT quality just as much as Kidman does.  If there is a problem I have in the movie it is I think both are two big stars themselves it’s hard to really see them outside their own sphere of importance.  Casting is a massive thing in looking at how much a film will be pushed by a studio project.  I get why Nicole and Javier are in it and they need to hold the power over the film as much as Sorkin’s name does, but geez wouldn’t it be amazing to have seen Debra Messing as Lucy.  I mean the reality behind the reality may be to big to imagine but we can dream can’t we.  I disgress though as it is obvious that Nicole and Javier bring it in the film.  Sorkin’s story is so refreshing and new to audiences you can look past the wish this actress game.

The film is a real triumph in not just giving a generic bio pic that dives into the stories we have heard.  Sorkin has written a vibrant tale that could have forever impacted TV and society if things had unfolded differently.  The film not only is a wonderful look back at that time but speaks to a modern world and tackles subjects that are being addressed and analyzed right now.  A lovely dive back in time that will keep you talking for days after.

Release: December 10th in Theaters and will release on Amazon Prime Video on December 21. 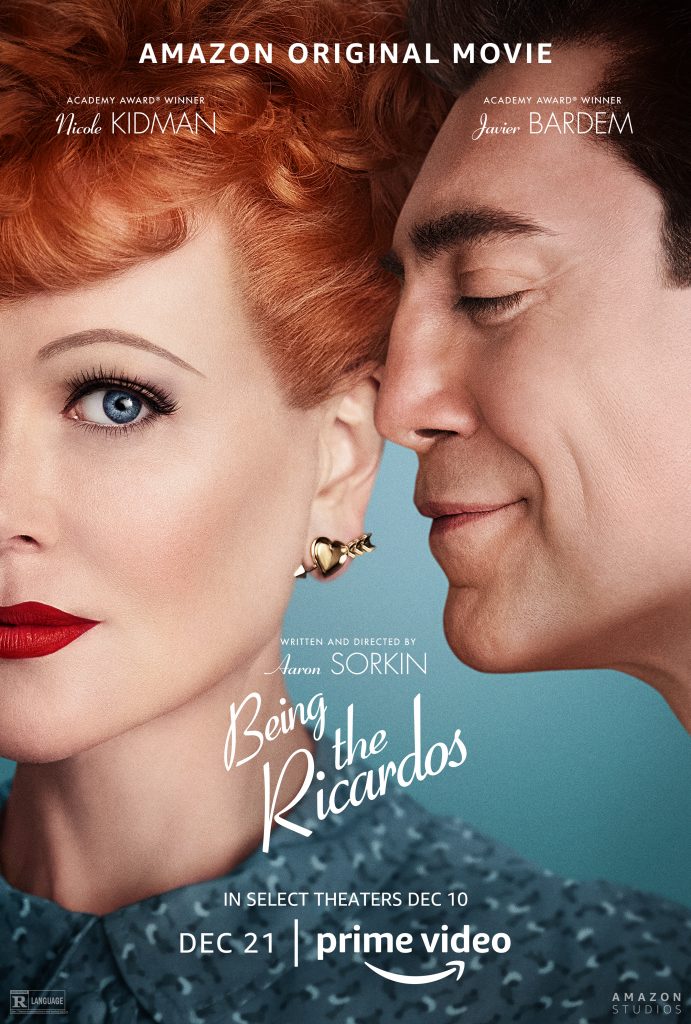 Written By
Gadi Elkon
More from Gadi Elkon
This weekend was dominated by Guardians of The Galaxy, but if you're looking...
Read More