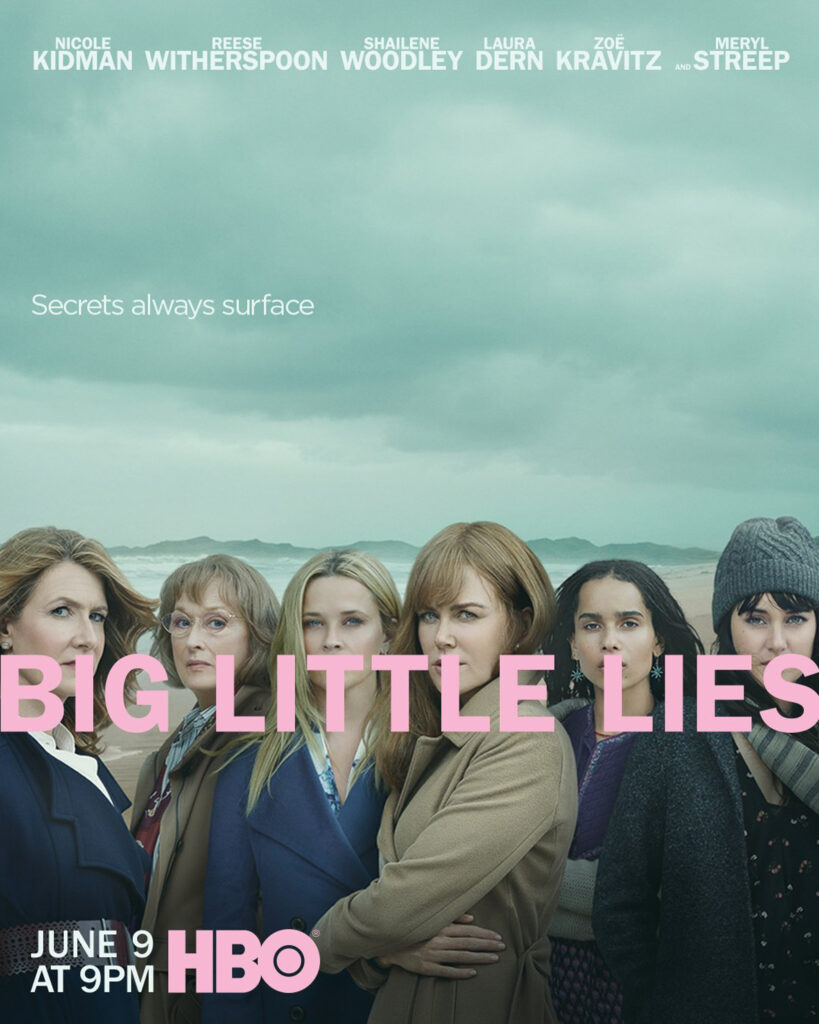 Warner Bros. Home Entertainment provided me with a free copy of the DVD I reviewed in this Blog Post.  The opinions I share are my own.

When I first looked at Big Little Lies to do a review of this season two set, I saw that David E. Kelley created the show from a bestselling novel by Liane Moriarty.  Liane has writing credits along with Mr. Kelley for all 14 episodes produced to date.  Matthew Tinker has writing credits for 2019’s seven episodes with Mr. Kelley and Ms. Moriarty.  Season two was not originally planned.  It was supposed to be a miniseries but HBO wanted more after the show received a Golden Globe Award for Best Miniseries or Television Film (plus Golden Globe wins for Laura Dern, Nicole Kidman, and Alexander Skarsgård).

The whole season’s storylines revolve around the echoes of that death.  The ladies are dealing with hidden truths and the repercussions of the lies they told following the death.  This situation is exacerbated when Perry’s momma, Mary Louise Wright (Meryl Streep), comes to town to find out what really happened to her son.  Along the way, would you believe she decides to try to get guardianship Celeste’s two children, her grandchildren?  This leads to some interesting courtroom scenes filled with all the pathos you can handle.

The supporting cast is filled with faces you will recognize (even if you don’t know their names).  Adam Scott (Ed Mackenzie, Madeline’s husband), Jeffrey Nordling (Gordon Klein, Renata’s husband), and James Tupper (Nathan Carlson, Renata’s husband) each have prominent subplots in this season’s action.

I am not going to mince words here.  This IS a soap opera in every sense of the words.  The show is filled with back-stabbing and infidelity.  Angst oozes from its figurative pores.

Thankfully for all of us who are generally not into this genre, the writers and talent of this show are beyond amazing.  The season started with a situation that would destroy many of us and the storylines brought the cast through their dilemmas in a way that was both entertaining and make us want to watch the next season.

The only bonus we received was a nice sit-down with the six leading ladies.  Their discussion was good, highlighting the rapport that developed between these amazing talents as the season progressed.  It was an excellent cherry to top off the season.

As the season began, I began to fear that I would not like this show.  I had not seen the first season with its pivotal scene in the last episode and did not really comprehend what I was getting into.  Thankfully, by the end of episode one I was interested and by the end of the second, I was hooked.  However, I found that binge-watching may be rough on your soul.  I personally found my psyche could only take watching one or two episodes at a time.  Watching more left me really depressed, I mean REALLY depressed.  Still, I give this DVD of Big Little Lies: The Complete Second Season an A for its content and acting.  You’ll probably not find a single character you can honestly say you like but that isn’t such a bad thing, is it?