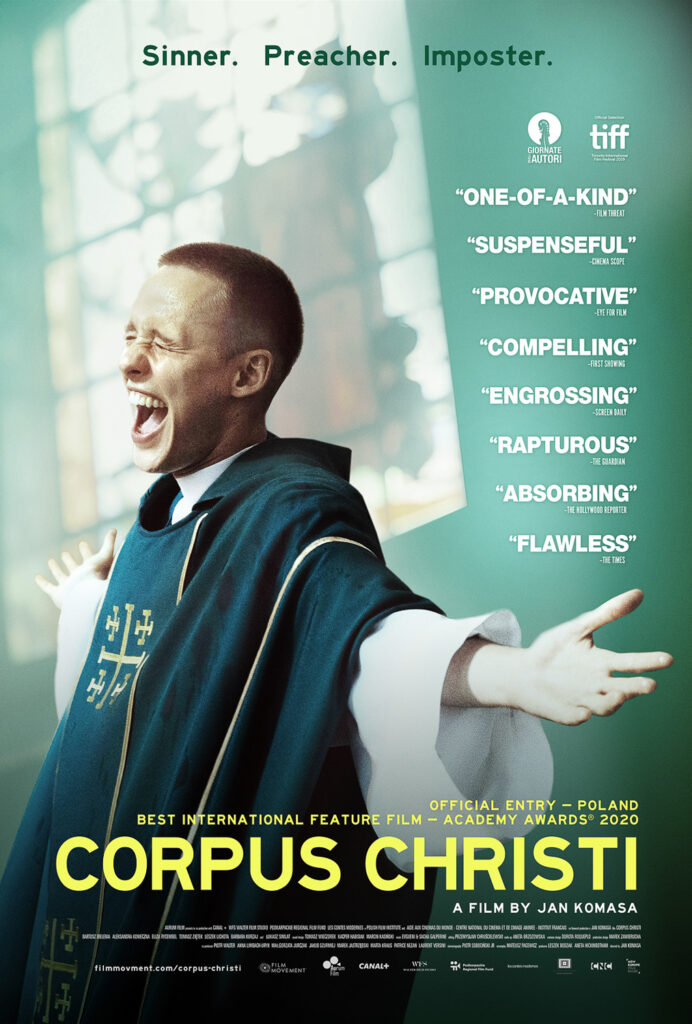 If you live in Texas, you might think this film is about spring break in the well-known coastal town we have of the same name. Instead, this is the Academy Award International Feature Film Nominee from Poland. The film is named after the Catholic feast day of Corpus Christi. It is the Solemnity of the Most Holy Body and Blood of Christ. It celebrates the real presence of Jesus Christ in the Holy Eucharist — Body, Blood, Soul, and Divinity. It’s telling that they chose to name this film after a celebration of God’s divinity because that is what the core of this film is. It’s a study of faith in human nature. Centering around the good and evil in the life of twenty-year-old Daniel (Bartosz Bielenia).

Corpus Christi opens with a brutal scene of a planned attack on an inmate. Daniel is forced to be the lookout. Side note – If you can make it past this first scene, then you will be rewarded with a stunning film. Shortly after this attack and after spending years in this Warsaw juvenile detention prison for a violent crime he committed when he was high, he is paroled. He is sent to a remote village to work as a manual laborer in the sawmill. This is not what young Daniel wants to do with his life. His life was truly changed by finding Christ in detention and the friendship he had in juvie with Father Tomaz (Lukasz Simlat). So he wants to be a Catholic priest. Unfortunately for him, the priest reminds him that no seminary will allow a convicted criminal with his background to become a priest.

Daniel feels rejected, and on his way to check in with his new parole job at the sawmill, he decides to party like he did when he was younger. He even puts on the shirt and clergy collar that he stole from father Tomas while he was high. It’s sex, drugs, and rock and roll. But Daniel doesn’t get the same pleasure from it all and you can read the emptiness on his face after partying. When he finally takes the bus to the remote sawmill, he decides he doesn’t want to work there because it just looks like another prison. Daniel goes for a long walk and ends up in a small town with one church in it. He’s just there to go to mass, but when a young girl snubs him asking him if he is part of the sawmill people, he lies and says, “No, I’m a priest.” He’s then reverently ushered in to see the parish priest, and that’s where the story really begins. The real priest falls ill and needs to get some help, so he asks Daniel, who is going by the name Father Tomaz now, to cover for him for a few days. A few days turns into a few weeks. Though Daniel has no training, his passion and charisma inspire the community. He sets about leading his newfound flock and even healing deep wounds resulting from an automobile crash that killed seven people in town.

Daniel has found his true calling. Unfortunately, reality and a former juvenile inmate that sees him when he blesses the new sawmill will put an end to his work in that church. The real father Tomaz comes to pick up Daniel and escort him back to juvenile detention. He’s amazed to see all the good that Daniel did for the community in such a short time.

The film ends where it began. Mired in the brutality that is life in a juvenile prison.

The writer for this film, Mateusz Pacewicz, actually got the idea for the story when he wrote an article about an actual event in Poland. There was a case of a boy who impersonated a priest for about three months. His name was Patryk, and he was about nineteen years old at the time. The boy performed weddings, baptisms, and conducted funeral ceremonies. The kid was fascinated by it all and really wanted to become a priest.

Corpus Christi is a brutal and often humorous look at faith, second chances, and atonement. Its lead, Bartosz Bielenia, is a revelation. He has star power that reminds me of a young Marlon Brando at his prime. I hope he will consider making the jump to English language films because Hollywood could really use a talented actor like him. Watching him as Daniel and seeing his various transformations throughout this film is worth sitting through any brutalities the movie opens or closes with.

I give Corpus Christi five stars. It’s a fantastic film about faith and destiny.