Dallas Theater Center's production of Colossal at the Wyly Theater is already one of the most talked about plays this year.  A play that tackles issues of homosexuality in sports, overcoming devastating injury, family dynamics, and all in the back drop of Texas football.  A bold, ballsy and hopefully groundbreaking piece of art that has 1 week left at DTC!  Click through for my review and links to get your tickets.

The scenic and music design of the film are immediately apparent when you ascend the stairs up into the stadium that has taken over the Wyly Theater.  The atmosphere of Texas football is epic and Colossal captures so much of that feeling just with lights, a talented drum line (including TALENTED symbol players!), green turf and bleacher style seats.  But to fully capture the power and speed of football the DTC team lead by Director Kevin Moriarty boldly cast two actual football players.  Mixed in with a talented group of actors this unique ensemble does more than dawn the burnt orange of the University of Texas they showcase their athletic talents through well rehearsed drills and reenactments. 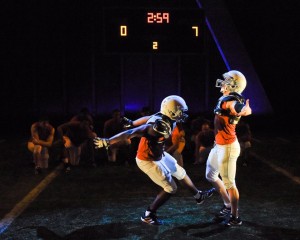 The choreography by Joshua L. Peugh is a real treat of the production.  The fluidity of having a marching drum line mingled in with high speed football players and a spry Joel Ferrel dancing all over the field is something special to witness.  There is also a wonderful element of time manipulation that is gained by terrific movement from the players.  Overall the play succeeds on hitting it's emotional arches because the physicality of the choreography movements is spot on.  If the players don't catch the passes or pull off the 360 spins past a defender then the reality is completely broken. This play is all about the pace and it's ability to keep you enthralled through ever lost second of time.  The play clock is a constant reminder of just how fleeting football and life can be.  Even when you can stop time it still finds a way to keep chugging along without you.

The plot revolves around two time frames.  The past glories of UT football and dance classes and the struggles of present day paralysis.  Zach Weinstein's performance as Mike is nothing shy of heartbreaking.  The physical nature of the sport and the inability of Mike to be physical now are a constant theme throughout.  Zach's reality just hammers home the fictionalized world of Colossal.  Even if these characters from award-winning playwright Andrew Hinderaker are fictional their inspiration and impact are totally believable.  Figures like Michael Sam are thrust into your mind when you witness the truth of Marcus and Mike's love.  Just as Zach's real paralysis harps to the tragic power involved in football.  Overall this play doesn't shy away from it's points but rather throws a spiral of knowledge directly at you. 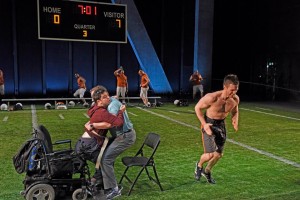 The dueling Mike's (Young Mike played by Alex Stoll) also showcases the inner struggle that battles inside of this former proud athlete and now wheelchair bound man.  Stephen Michael Walters plays the physical therapist that is helping Mike to hopefully walk again.  Their discussions are some of the real highlights of the production and the further inner battle is heightened by their constant struggle to work Mike's lifeless body.  There are wonderful moments where the two Mikes confront, console and compel each other to greater choices.  But it's in these battles that the reality of loss love is slowly penetrating to the audience.  Mike's homosexuality is something that isn't thrown in your face.  There are some intimate sequences and plenty of shirtless football players.  But a lot of these scenes poke fun at the overtly gay qualities of the masculine football world, see butt slapping as example A.  Overall through the real struggle of present day Mike is he's lost not only the power of over his body but also the power of love as he's lost Marcus (Khris Davis). 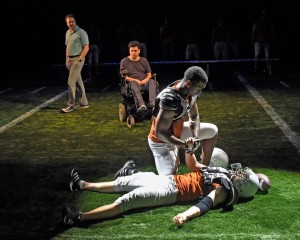 The play looks at different male relationships in heartfelt ways.  Coach to players is how we start as Brierley Resident Acting Company and Community Artist at DTC Hassan El Amin thunderous bellows bring us into the football world so perfectly.  There is the story of Mike and his physical therapist.  Mike and his father played by Joel Ferrell that really opens up deep-seeded emotions as we see the unique dynamic of disappointment.  The father-son struggle is a powerful figure in the play and it's not till the very end that we deal with that rift.  But it's a ultimately a story of two friends turned lovers.  Marcus and Mike's love story is something that I think we can all admit has happened, is happening and will happen in professional, college, and high school sports.  But the documentation of said relationships are still to in the closet to be shown in real figures.  Michael Sam's story is the latest example of this reality.  But two teammates in love that element of the story will get the most praise and most hatred from spectators.  Andrew's play holds its tremendous power in how honest and open it is with the homosexuality in the production.  In the end, you feel all of the heartbreaking emotions that pull Mike in so many directions. 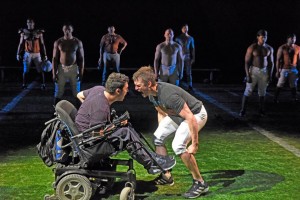 This amazing production ends this weekend.  Don't miss out on a chance to witness something truly special.

For more information on the play and how to get tickets go to DallasTheaterCenter.org.