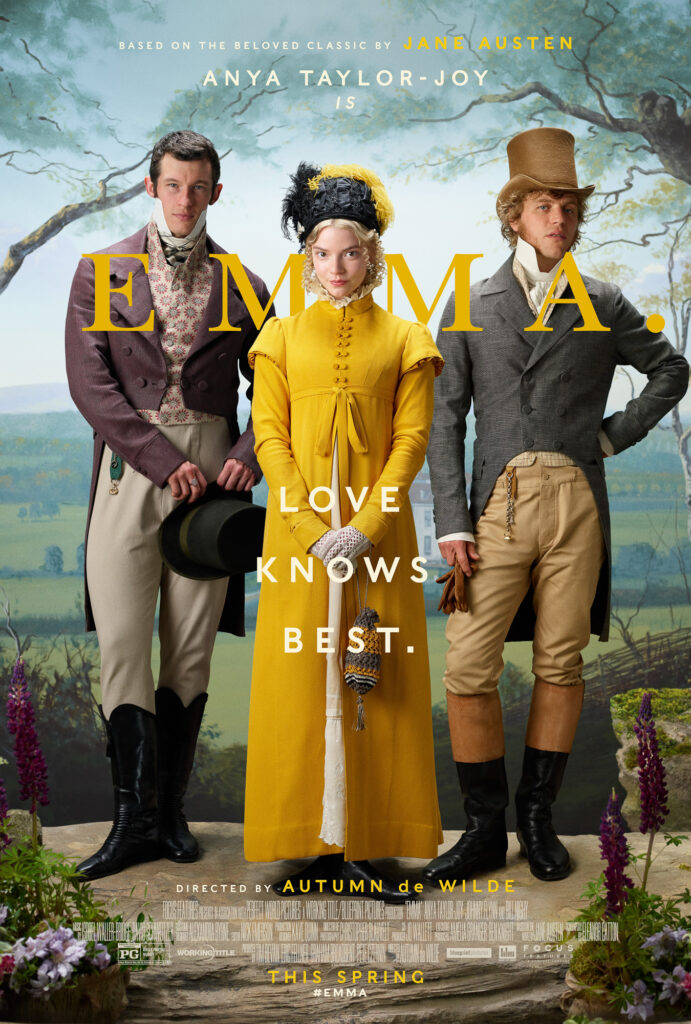 EMMA. – A Review by Cynthia Flores

Attention Jane Austen fans, you finally have a film telling one of her beloved stories without any modern twists or even zombies running around. Please don’t get me wrong, movies like Clueless (1995), and Pride And Prejudice And Zombies (2016), were fun. But considering the original story of Emma in novel form was published in 1815 and manages to still be entertaining and relevant today means it’s worthy to have a straight adaptation to film. Emma is director Autumn de Wilde’s feature film debut and she knocks it out of the park. Her take on this classic is spot on. The film also has a bold vision and style brought to the screen by cinematographer Christopher Blauvelt. And costume designer Alexandra Byrne outdid herself with all the details of the lavish style of clothing that the gentry of that time wore. There are times in the film that you watch the main characters being dressed by their valets, and you will nerd out on all the historical details. Also, the fact that the soundtrack to Emma has no modern songs blaring along only music of that time was a nice touch.

Ok, if you’ve gotten this far in the review and don’t know the classic story of Emma shame on you.  For those of you living under a rock or in a VR world, here is a brief overview – Emma Woodhouse (Anya Taylor-Joy) is a young, beautiful but vain, woman. She lives in a large mansion on the Hartford estate of her elderly father (Bill Nighy) in the village of Highbury. Her best friend and confidant is her slightly older neighbor George Knightley (Johnny Flynn). Emma has no wish to marry but enjoys pairing up her family and friends. The film follows Emma and her new friend, Harriet (Mia Goth), as they experience friendship, love, and heartbreak.

As you can tell, I loved this film. There are not very many films that, as the credits roll, I want to immediately watch it again. Emma is that kind of movie. Also, the actress cast to play this lead is twenty-three-year-old Anya Taylor-Joy. Her portrayal of young spirited Emma is full of youthful hubris and poignant growing up, just as Jane Austen intended so long ago.

I give Emma five stars. I know it will be added to people’s movie collections and will fast become a fan favorite.