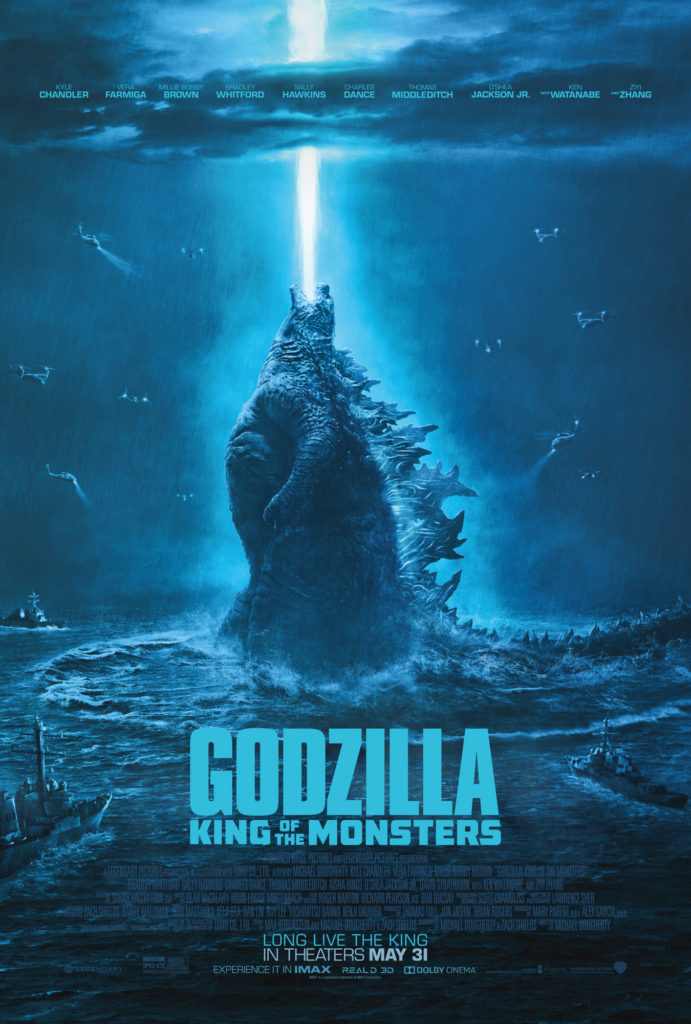 GODZILLA: KING OF THE MONSTERS – A Review by Cynthia Flores

One of the main characters during this sequel to the 2014 film Godzilla says, “Long live the King.” referring to the badass that is Godzilla: King of the Monsters.  The story picks up after Dr. Emma Russell (Vera Farmiga) and her husband Mark (Kyle Chandler) have split up over the loss of their young son Andrew in 2014.  A casualty to the fighting Godzilla was doing to save the world.  Madison (Millie Bobby Brown), their only remaining child, has watched as her family was torn apart.  She still works with Dr. Ishiro Serizawa (Ken Watanabe), Dr. Ilene Chen (Ziyi Zhang), Dr. Rick Stanton (Bradley Whitford), and Dr. Vivienne Graham (Sally Hawkins) at Monarch studying the Titans they have captured and hidden all over the world.  While the government wants them dead, the scientists are trying to prove that we can co-exist with them instead.  Dr. Russell has even perfected the “Orca” which is a device capable of emitting frequencies that only Titans (monsters) can hear well.  Calming them down or making them want to fight.

At the same time, an organization of eco-terrorists, led by Alan Jonah (Charles Dance) attack.  It’s the area where Emma and her daughter are working with Mothra one of the Titans (she is the radiant Queen of Monsters and a giant moth).  They kill everyone on site and take the doctor, her daughter, and the device with them.  Monarch approach Mark Emma’s now ex-husband to help then track down his family and try to save them.  Monarch figures out that Jonah’s next target is Mexico where he intends to use the Orca to wake up King Ghidorah (the three-headed dragon monster and only real foe to Godzilla).  As this is happening, Monarch discovers that Emma is not a hostage but rather a co-conspirator with Jonah.  They want to use the Titans to help balance the scales and rid the earth of most of the humans that have poisoned it and are destroying it.  Starting over on fresh green earth.  However, Ghidorah has other plans and wants to wipe out the planet altogether.  He wakes up all the other Titans/monsters such as Rodan (a fiery giant bird), and several other Mutos (massive unidentified terrestrial organism) or monsters.  He controls them, so they all start just tearing up everything around them.

Madison feels betrayed by her mother, who sold her on the bill of goods that this would ultimately be a healing thing for the planet in the long run.  When Madison sees all the death and destruction, she confronts her mother on her motives – that what she really wanted was revenge for Andrew’s death making her the real monster.  Madison then steals the Orca and heads off to Fenway Park in Boston to use their extensive PA system to broadcast a signal that will make all the monsters except King Ghidorah docile and calm.  No, he gets mad and goes looking for the sound.

WILL MADISON AND THE ENTIRE EARTH SURVIVE THE DESTRUCTION KING GHIDORAH HAS PLANNED OR WILL GODZILLA KICK HIS ASS?  You will just have to see the film to find out.

Godzilla: King of the Monsters is not the best film in the long-running franchise, but it is lots of fun to cheer for Godzilla to win in battle.  I think if they could just show more monsters fighting and less of the “Eco-terrorist” side story, then it would have been a much better movie.  There is something about seeing the huge beast fight to protect the earth that turns most of us in the audience back into little kids.  Some of us can remember the first time we saw the original 1954 black and white Japanese film on TV reruns late at night.  We were captivated by the great lumbering giant.  In fact, this film was dedicated to two men.  One of which was the original Godzilla suit performer Haruo Nakajima, who died in 2017.

Only because there needed to be more monster time instead of so much people time on-screen I give Godzilla: King of the Monsters a B- rating.  Still worth enjoying it on the big IMAX movie screen.