The phenomenon that is HAMILTON is back in North Texas!  The epic historical reimaging by Lin-Manuel Miranda has continued to raise the impact bar.  I won’t ask if you should attend but more like WHEN are you going!!

HAMILTON is the story of America then, told by America now.

Featuring a score that blends hip-hop, jazz, R&B and Broadway, HAMILTON has taken the story of American founding father Alexander Hamilton and created a revolutionary moment in theatre—a musical that has had a profound impact on culture, politics, and education.

With book, music, and lyrics by Lin-Manuel Miranda, direction by Thomas Kail, choreography by Andy Blankenbuehler, and musical supervision and orchestrations by Alex Lacamoire, HAMILTON is based on Ron Chernow’s acclaimed biography. It has won Tony ®, Grammy ®, and Olivier Awards, the Pulitzer Prize for Drama, and an unprecedented special citation from the Kennedy Center Honors.

The latest national touring show may not have the full Broadway star-studded cast but the lyrics, music, and fire power are all still present.  And this talented group of performers will all be highly touted after they finish such a vast tour.

Our Alexander is Edred Utomi who’s hops, voice quality and cheeky moves are all on point.  Josh Tower is a bit more of a filled-out Aaron Burr but his vocal range really carries well in the complexity of the infamous figure.  Tower was also fantastic as Berry Gordy in the underrated Motown the Musical.  Paul Oakley Stovall is the aged vet whose booming voice embodies the famous George Washington.  Stovall is the touring figure that captures your full attention whenever he tackles the stage.  The two standout male performers though are David Park as Lafayette and Thomas Jefferson and Peter Matthew Smith as King George.  Park’s vibrant style is a real treat that adds flair and style to show.  Park working off Utomi in the second half’s debate scenes are truly fantastic to witness.  Peter Matthew Smith’s King George is mic drop quality with each solo moment.  Peter’s ability to wear the heavy crown and attire is impressive visually as it is on a humor-filled star level.  Peter completely steals the audience with his saunter and wily delivery.  The contrast of the King George character is the perfect foil to the bravado of the American Revolutionary heroes.

The ladies though!  Ok as much as Hamilton is a male centric tale there is little doubt the roles of Eliza Hamilton, Angelica and Peggy Schuyler are just as important historically as performance wise.  The show I saw had Zoe Jensen as our Eliza, Stephanie Umoh as Angelica and Olivia Puckett as Peggy and Maria Reynolds.  All three held their own vocally and seem to handle the spinning center stage contraption the smoothest. Umoh especially takes hold of the show when she belts out one of the show’s highlight numbers.

The open staging of Hamilton with its surrounding stair risers and center spin device allows for the talent to really fly through their scenes. Numbers like “My Shot” and “Yorktown” are fully realized in scope and size on the open stage.  Though the number of standing ovation numbers in Act 1 & 2 is prolific.

Lastly, the power of the Orchestra is hugely important to the full enjoyment of the production.  The iconic American and British notes that we all have grown knowing are subtly and not-so subtly connected to each of the musical sequences.  Many folks will always consider the amazing element of Hamilton is Miranda’s quick rap lyrical styling but the musical’s strong orchestra presence is just as memorable.  The production houses such a perfect combo of all the key elements that it is hard to find fault.

I will point out one of the more fun sidenotes to any show is I recommend watching young audience members during the productions.  I witnessed so many kids rapping along and always bouncing and foot tapping to the beat.  Of course, the power of the musical is its ability to be repeatable but to see the passion of the Hamilton fan (especially the young ones) is truly awe inspiring.

No need to wax on about the merits of this juggernaut of a show.  Grab the kids and go learn, laugh, and linger in the power of this incredible show.

ATTENTION HAMILTON TICKET HOLDERS: DUE TO INCREASED ACTIVITIES IN FAIR PARK, YOU CAN EXPECT SIGNIFICANT TRAFFIC DELAYS GETTING TO MUSIC HALL. WE ADVISE YOU TO ARRIVE AT THE MUSIC HALL 90 MINUTES BEFORE YOUR SCHEDULED PERFORMANCE TO GUARANTEE ON-TIME ENTRY INTO THE THEATER.

To get tickets – HAMILTON.

The show runs through December 5th. 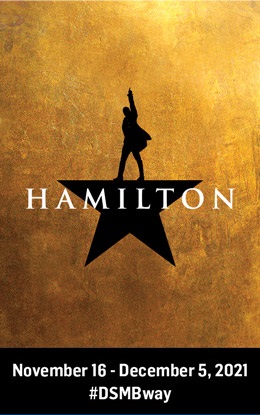