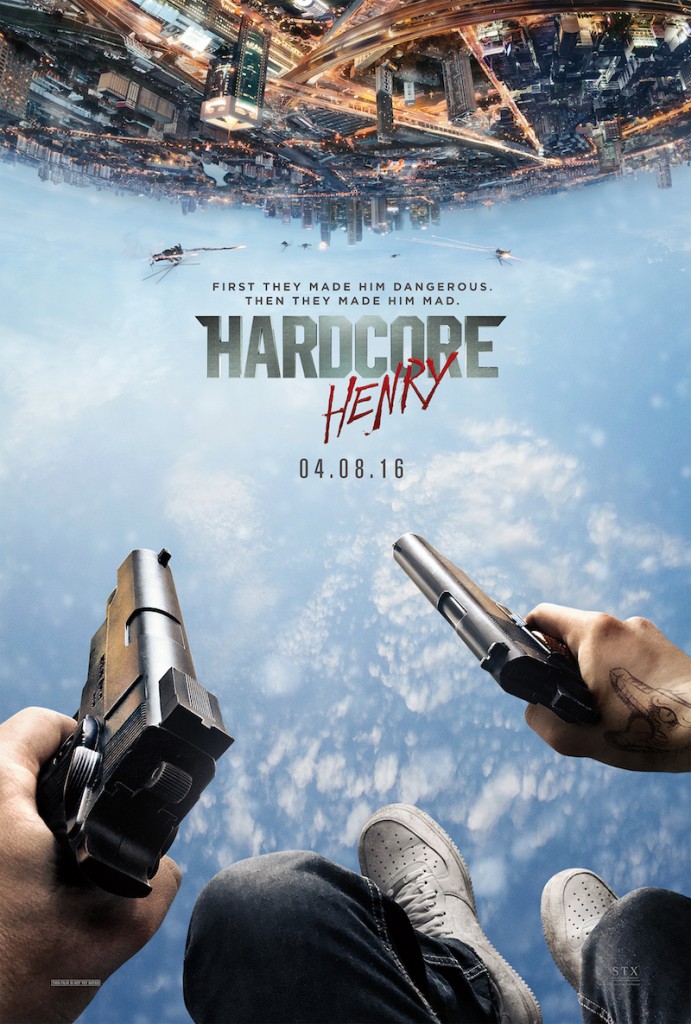 Written and directed by Ilya Naishuller

Ever since The Blair Witch Project, there has been this idea that a ‘bouncing camera’ was a great way to build suspense.  It somehow makes the film feel real and the action so much more an ‘in-the-now’ experience.  Since that day, there have been others to go down that path.  We have been subjected to such diverse flicks as The Virginity Hit and the Paranormal Activity saga.

There is a clip of a bunch of kids confronting the audience then a man telling the ‘first person’ to man-up.  Then, the story starts in a lab where a woman scientist (Haley Barrett) is operating on our first person who we soon find out is Henry.  It seems Henry is missing both an arm and a foot.  The woman is putting on new bionic limbs.

She tells the person that he is Henry and that she, Estelle, is his wife.  She begins to teach him how to operate his limbs and give him a voice.  Then the lab is broken into by a group of darkly clad figures led by Akan (Danila Kozlovsky).  He is a mean SOB who has mystical powers.  The two escape into another part of the laboratory and then they jettison from the lab which seems to be miles above the ground in Russia.

Upon landing, the two are assaulted by more henchmen and Henry finally figures out how to operate his new limbs.  He then becomes a super bad killing machine, laying to waste a number of bodies that borders on a Rambo flick.   It seems that for the three leads, the only reason to be in this cast is to be dead.

Henry keeps running into Jimmy (Sharlto Copley) a guy of many different disguises.  It seems that Jimmy is trying to help Henry but Jimmy always seems to be meeting his maker.  Time and time again, Jimmy is here then he is dead but then he is back again in a different wardrobe.  Then, he is dead again.

To make this weird film seem weirder, there is a musical number in the middle of the work.  It fits with the general milieu of Hardcore Henry but it still feels a bit off-putting.

Sharlto Copley easily has the best role.  Or should it be called a series of ‘role’?   His character is like the Energizer Bunny; he keeps going and going.  It almost becomes comic relief in the amount of times he is back and in a different persona.  The explanation makes eventual sense but it is confusing for a portion of the film.

Danila Kozlovsky feels as if he is playing a Bond master villain but with a definite science fiction fantasy bend; ala Harry Potter.  There is this crazy gleam in his overwrought eyes that brings a chill down just about every spine in the theater.  There is no explanation of his powers; they just are a part of the fabric of the story.

Haley Bennett is a striking beauty but she’s not given much more to do other than look good.  Her Estelle character disappears for such a long time that one even forgets that she is a part of the movie.  This damsel in distress feels like a Bond girl but without the screen time.

The film is written and directed by Ilya Naishuller and it is of a singular focus.  He puts the film in forth gear and never lets up on the accelerator.  In temperament, it feels like Shoot’em Up where the film jumps in a fast pace and never lets up.  But, it is not the tone of Shoot’em Up.  This is a very different looking film, unlike anything one has ever seen.

At the same time, it is also one of the ugliest films of 2016.  They make Russia look like a dump and not an exotic city.  The stander-bys are all sad and frumpy.  It is in no way like an espionage flick of the 20th Century.

Within the first person idea, there are many stunt sequences to drive the story.  Throughout the work, one is stunned by exactly how they performed the sequences.  No one would be shocked if dozens of stunt men were not hurt and maybe even killed during the making of Hardcore Henry.  By the time it is over, one realized that there is a new threshold of special effects and stunt work.

The reason that Hardcore Henry gets such a low rating is that I don’t ever want to see the film in the theater again.  I hate those first person bouncing camera films. I always have and I always will.  It makes me sick at the stomach.  Don’t get me wrong, I love roller coasters but they are over in a few minutes.  An hour and half ride on a steel rail behemoth would make anyone ill.  After about three minutes I had had enough.

But to be totally honest, Hardcore Harry is not for me but for a serious teen gamer.  It is for those used to the video game world, the kind of kids who have been working a control stick since before they could talk.  It is not for those who are older than about 30 or for those with a squeamish stomach.