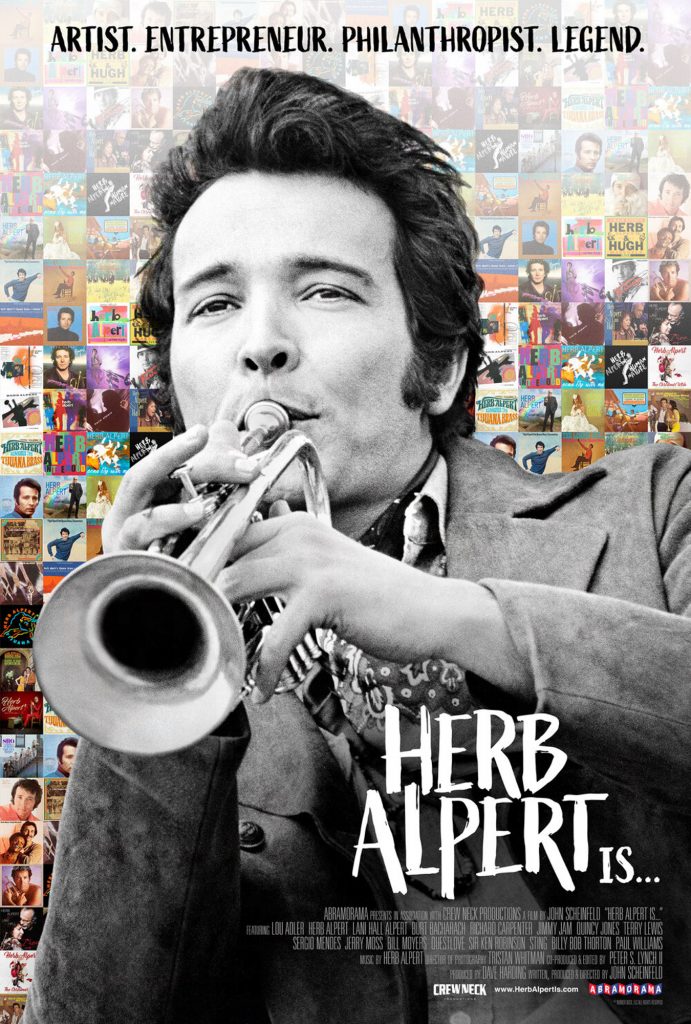 HERB ALPERT IS… – A Review by John Strange

Miles Davis said, “You hear three notes and you know it’s Herb Alpert.”  His music is that iconic.  His music talks to your soul.  His music makes you want to dance.  Those reactions are as true today as they were in the early 1960s when Herb found his sound and formed Herb Alpert and the Tijuana Jazz.  But Herb Alpert is so much more.  He paints, he sculpts, and with the aid of the Herb Alpert Foundation, helps arts programs continue to enrich the souls of new generations.

This film, by John Scheinfeld, is an homage to the man.  It looks at his life from stem to stern, telling us about the things that influenced him to be the man he became.  Be the man he is.

From his birth in 1935, Los Angeles, to his grade school where he found his love for the trumpet.  From school to the US Army and then his early attempt to enter the music business.

The pace of the film is fast but not too fast to give us a good view of how this talented man developed his sound. How he kept his humility and soul even while his music and albums were exploding upon the music scene resulting in outselling the hottest bands of the era (even the Beatles).  No one had ever seen an instrumental group gain this type of popularity before.

We learn about Herb and his business partner Jerry Moss forming A&M Records.  Their way of doing business was completely different from the way the bigger companies found and produced bands and their music.  Throughout the film we are given video bites, short interview clips, from the artists who got their break with A&M telling us about Herb and how either he changed their lives or how influenced their music, often both.

In the film, you’ll hear from Sting, Richard Carpenter, Paul Williams, Burt Bacharach, and others who found a family at A&M.  You’ll also hear from Herb’s daughters and nephew and his business and producing partners.  But the one person I really enjoyed hearing from was Lani Hall, his second wife.

Lani was the lead singer for Sergio Mendes & Brasil ’66 from 1966 until 1971.  They met when Herb began working to help the group record for A&M Records.  They were married a few years following his divorce from his first wife, Sharon.

The film shows how the business was good to Herb but also hard on him.  That he stayed humble and true to himself is amazing.  That the music he is still making is as exciting as the early songs are equally amazing.  The Herb Alpert quote from the film that says it all is, “I can’t explain it other than I was caught totally off guard.  It was like I was playing weddings and bar mitzvahs; you know what I mean?”

I love this film and its warm friendly approach to the man, Herb Alpert.  This is a 5-star documentary.  As Questlove says in one of his snippets, “It’s the happiest music in existence.  If I feel down or whatever, I just put on… I have a Herb Alpert mix… it’s literally feel-good music.”  I agree. This was so good that I ordered two CDs immediately after for my home collection so I can make my own mix.