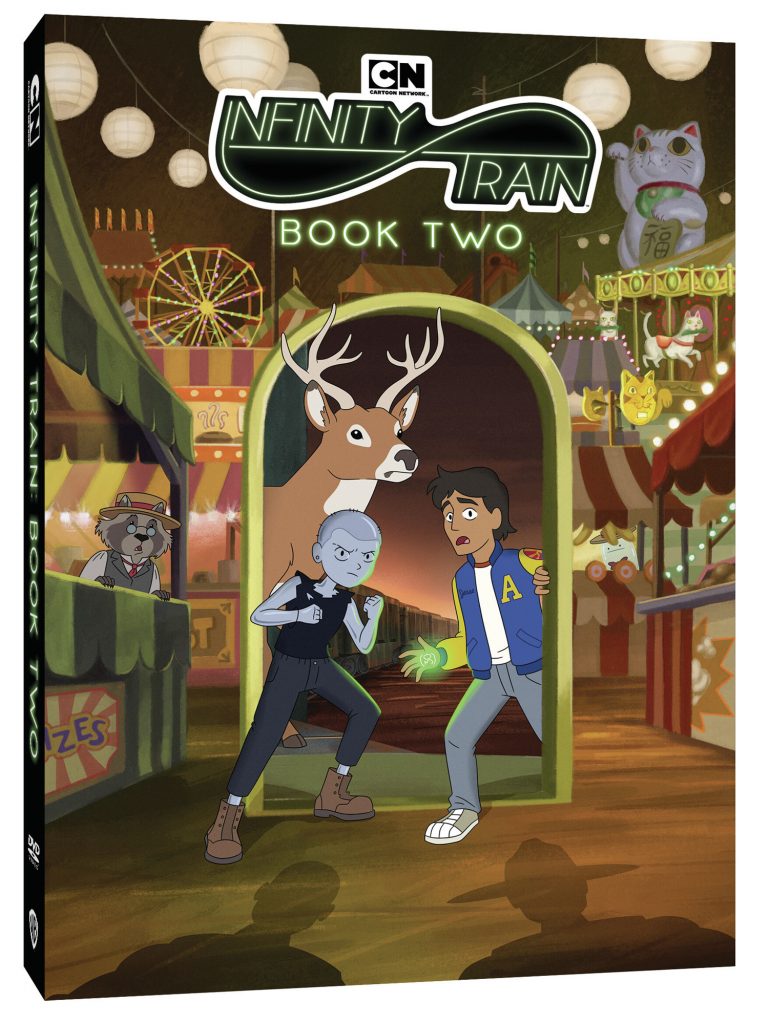 Warner Bros. Home Entertainment provided me with a free copy of the DVD I reviewed in this Blog Post.  The opinions I share are my own.

The showrunners of Infinity Train decided to follow Mirror Tulip (like Tulip, Mirror Tulip is voiced by Ashley Johnson) rather than Tulip, the central character of season one.  At first, I was a bit taken aback by the change but early in the first episode, I was hooked.

Mirror Tulip (or “MT”) has a view of the world of the train that is somewhat unique.  Unlike Tulip, she has no number on her hand.  This marks her as a non-passenger.  It makes her less than the passengers to the train’s controller.

MT’s travails are made more difficult thanks to her bad attitude towards… well, her predicament.  Regardless of this, she gathers good traveling companions, Alan Dracula (a silent character) and Jesse Cosay (voiced by Robbie Daymond).

Her fight to get away from the train (and her constant tormenters, the Reflection Police) sees her encountering some of the same beings we met in season one.  One-One (Glad-One, voiced by Jeremy Crutchley and Sad-One, voiced by Owen Dennis) and The Cat (voiced by Kate Mulgrew), chief among them.

The whole season is an interesting choice by the writing team, the producers, and the series creator.  It gave them access to a group of storylines not possible by following Tulip.  This stream of episodes was well-written and quite enjoyable.

Those of you who read my home release reviews will know how much I love director commentaries.  Season two has a commentary for each episode.  Each had the writer of the episode joining the series creator and the supervising producer talking about the ideas and decisions behind that episode.  They are all good, interesting, and enjoyable.

The Art Gallery (5:13 minutes in length) contain storyboard and test drawings of characters and locations, with a selection of photographs showing the artists, working and playing, during the middle of the sequence.  It is okay, but thanks to the way they play as a video, you can’t get a really good look at any single frame without constantly pressing pause.

Finally, we have four videos the filmmakers call “Animatics”.  These are, basically, a storyboard view of the episode in question.  Honestly, they got on my nerves.  I didn’t actually learn anything new from watching them.

What we have at the end of the day are one set of really good bonus extras, one okay video of artist images, and a set of annoying “animated” storyboards.  Commentaries are worthy of 5-stars but the other two drop to rating to 3-stars.

RICK AND MORTY: THE COMPLETE FIFTH SEASON – A Blu-ray/DVD and Digital HD Review by John Strange