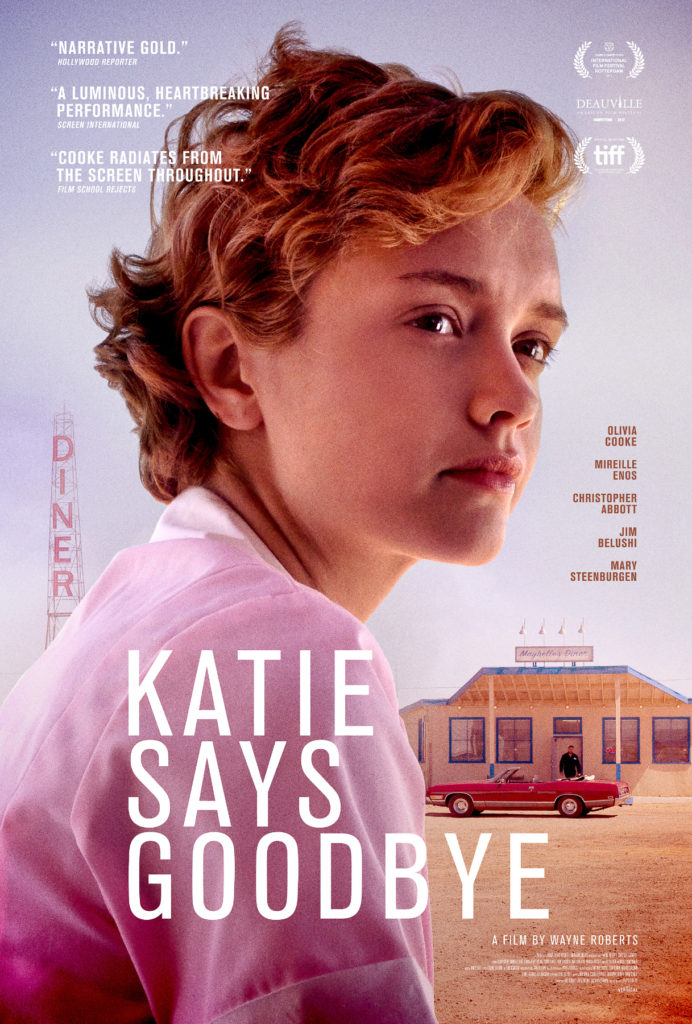 Katie Says Goodbye initially released in 2016 but is getting a second chance out in theaters.  Since I missed this little gem back then I will simply review it with the caveat that I’m glad they brought it back for round two.

The film tells the story of a kindhearted Katie (Olivia Cooke) who is seventeen years old and living in Arizona in a nameless small town out in the middle of nowhere.  Her depressed and unemployed mother Tracey (Mireille Enos) is too busy sleeping with their trailer park neighbors’ husband to be a good mom.  Katie walks to the diner where she works for Maybelle (Mary Steenburgen) who is a surrogate mom.  She’s kind and loving to her.  Katie has to pay all the bills, so she prostitutes on the side with a few regulars – her ex-high school teacher, Mr. Daniels (Nate Corddry), who happens to be the father to her co-worker Sara (Natasha Bassett), the local sheriff (Morse Bicknell), and a kindly trucker named Bear (Jim Belushi) who stops at the dinner on his route.  Everything is going well as she is also saving up to move to San Francisco and go to beauty school to become a hairstylist.  It’s a small dream, but she thinks making people look good is a nice thing in this world.

One day while walking home she sees the new guy Bruno (Christopher Abbott) working at the garage with Dirk (Chris Lowell) who is a foul-mouthed jerk and Matty (Keir Gilchrist) who is shy and has always had a crush on Katie.  It’s love at first sight.  Bruno is fresh out of prison and quiet.  While Katie is bubbly and chatty, they make a cute pair.  Now that Katie has someone to love, she’s excited to invite him to move to San Francisco with her.  They have their plans and are almost ready to go until her mother Tracey gets in the way . I won’t tell you everything that happens to poor Katie because I want you to see this film.  I will tell you that the level of betrayals and brutality she endures are utterly heartbreaking.

This film is a beautiful study in the survival of a gentle soul.  And Olivia Cooke is brilliant as Katie.  Bear always tells her, “You stay sweet, ya hear” whenever he leaves her.  I think that pinpoints what is at the core of this film.  Because somehow, even after all that life throws at this young girl she endures.  Katie does manage to “Stay Sweet” at heart.  She is one of those women that doesn’t give up, and you just know they will thrive despite anything life can throw at them.

So I am glad Katie Says Goodbye gets a second chance in theaters.  I give this film a solid B+ rating and hope it finds its audience this time.