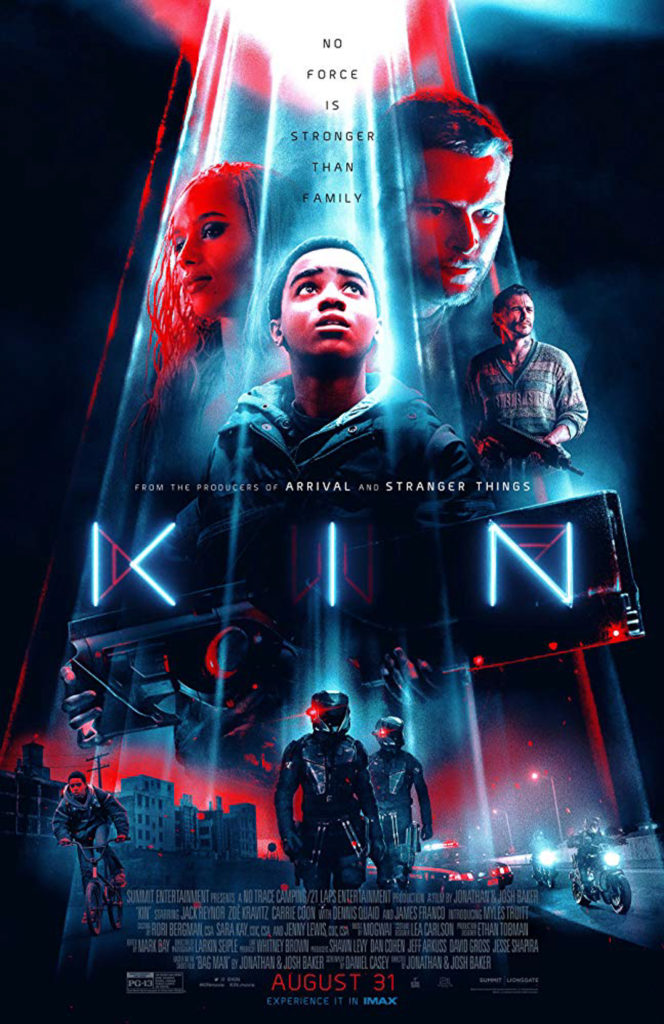 KIN – A Review by Cynthia Flores
KIN is a slow burn new independent sci-fi story that by the end of it you’re set up for the next part of the story.  Starting a mythology or new multi-film arch story is not an easy thing to do and KIN falls prey to some of the pitfalls that come with that kind of task- limited cash for non-stop action sequences and the weight of selling a new canon in a short period of time.
Because of this, the pacing is slow at times as we get to know the young fourteen-year-old Elijah Solinski (Myles Truitt), who is the lonely, and spends a lot of time stripping copper and aluminum out of abandoned buildings.  He is the adoptive son of Hal (Dennis Quaid), who is widowed and trying to do his best to make his youngest son a good and honest man without the help of his wife.  He feels like he failed with his eldest son Jimmy (Jack Reynor), who has just been released from his six-year stint in prison.  He tells Elijah to be careful around his older brother and stay out of trouble.  Jimmy owes sixty thousand dollars to a gang that gave him protection in the joint.  It’s leader, Taylor Balik (James Franco), is crazy and as over the top violent and menacing as a PG-13 rated film will allow.  When it comes time to pay, Jimmy asks his father to look the other way so he can rob the company safe where Hal works.  Of course, the robbery goes awry and has horrible consequences.  Putting Jimmy and Elijah on the run from the vengeful gang.
Lucky for Jimmy, his little brother earlier had happened on what looked like a really bad fight between mysterious men dressed in black with black head shields and helmets.  It’s at this site that Elijah discovers a gun/weapon that doesn’t look like anything he has ever seen before.  He keeps it and uses it to protect him and his brother on their travels with a stripper named Milly (Zoë Kravitz), who is looking for an out.
I won’t give everything away, so you will go see this film and see Michael B. Jordan in his important cameo.  Let’s just say that Elijah learns who he wants to be as a person and where he belongs.  All and all, KIN is not a perfect film but it shows a lot of potential.  I really loved the limited use of cool special effects to tell the story.  I think with a bigger budget, they could have gone even further with it.  The co-directors/writers are brothers who show a lot of potential with this film and I hope they get a chance to continue this story.  I give this film a solid B- rating.
Directed by Jonathan Baker, Josh Baker
Written By Jonathan Baker, Josh Baker, Daniel Casey
Rated PG-13
Selig Rating B-
Running Time 1h 42 min
Action, Sci-Fi
Wide Release August 31st
Starring: Myles Truitt, Jake Reynor, Dennis Quaid, Zoe Kravitz, James Franco
The Selig Rating Scale:
A – Excellent movie, well worth the price.
B – Good movie
C – OK movie
D – No need to rush. Save it for a rainy day.
F – Good that I saw it on the big screen but wish I hadn't paid for it.
Tags from the story
Dennis Quaid, Jake Reynor, James Franco, Jonathan Baker, Josh Baker, Kin, Myles Truitt, Summit Entertainment, Zoe Kravitz
Facebook Twitter Pinterest
LinkedIn Email