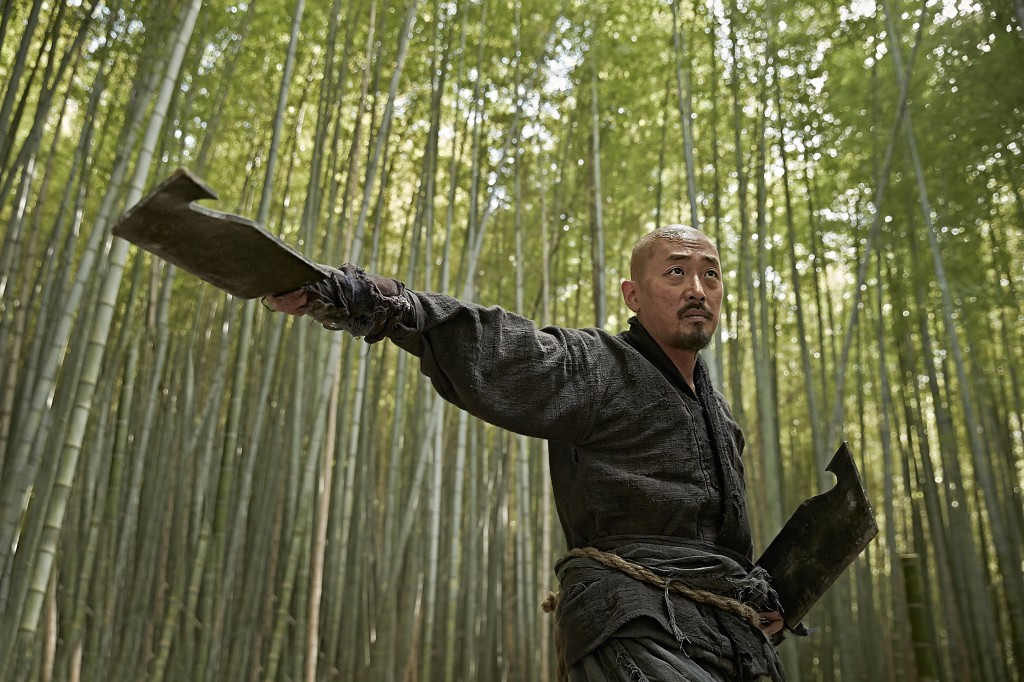 KUNDO: AGE OF THE RAMPANT
By: John ’Doc’ Strange
Directed by: YOON Jong-bin
Cast: HA Jung-woo, GANG Gong-won, LEE Sung-min, CHO Jin-woong, MA Dong-seok, YOON Ji-hye, JUNG Man-sik, KIM Sung-kyun, KIM Jae-yeong, LEE Kyeong-yeong
MPAA Rating: NR
Selig Rating: FULL PRICE
Runtime: 137 Min.
Korean with English Subtitles
1859 in South Korea, it’s the waning days of the Joseon Dynasty.  Poverty and death are in the wind due to the greed of the nobles and government officials.  Those who oppose these ruthless tyrants are called bandits and criminals.
There arises a group much like a militia who do what they can for the populace.  Much like the stories of Robin Hood in the Middle Ages in Europe, they attack those who take from the poor and return the food to those who need it.  This group call themselves KUNDO.
Their arch nemesis is Jo-yoon, the bastard son of the local aristocrat.  He was taken from his mother and the brothel at an early age and raised by his father to be his heir.  When his father’s wife has a son, a legitimate heir, Jo-yoon is pushed aside to allow his half-brother to take the position of heir to their father’s power.
Jo-yoon does terrible things to the people in an attempt to make his father love him again.  He fails to regain that love and descends deeper into his pain, showing increasing cruelty towards the people.  Only his prowess with a sword saves him time and again as the one person after another challenge him in attempts to bring him down.
Much like the best westerns in American films, these films show that evil can only be defeated when the people stop accepting their fates and fight back.  Kundo: Age of the Rampant is an excellent film of the genre, filled with superb action sequences and martial arts choreography.
This was an excellent way to spend an evening.  Popcorn and martial arts films just seem to go together.  I hope your popcorn is fresh and hot, the movie will be all you could ask for it to be.
Movie Site: www.KundoMovie.com
The Selig Rating Scale:
FULL PRICE – Excellent movie, well worth the price
MATINEE – Good movie
DOLLAR – OK movie
CABLE – No need to rush. Save it for a rainy day.
FREEBIE – Good that I saw it on the big screen but wish I hadn't paid for it.
COMMERCIAL TV – Commercials and cutting to the allotted time will not hurt this one.
FORGET IT! – Bad. If you see this one, do yourself a favor and keep it to yourself.
GET YOUR TORCHES – BAD! – Burn the script, the writer, the director and maybe even the actors!
Tags from the story
CHO Jin-woong, GANG Gong-won, HA Jung-woo, KUNDO: AGE OF THE RAMPANT, LEE Sung-min, MA Dong-seok, Well Go USA Entertainment, YOON Jong-bin
Facebook Twitter Pinterest
LinkedIn Email