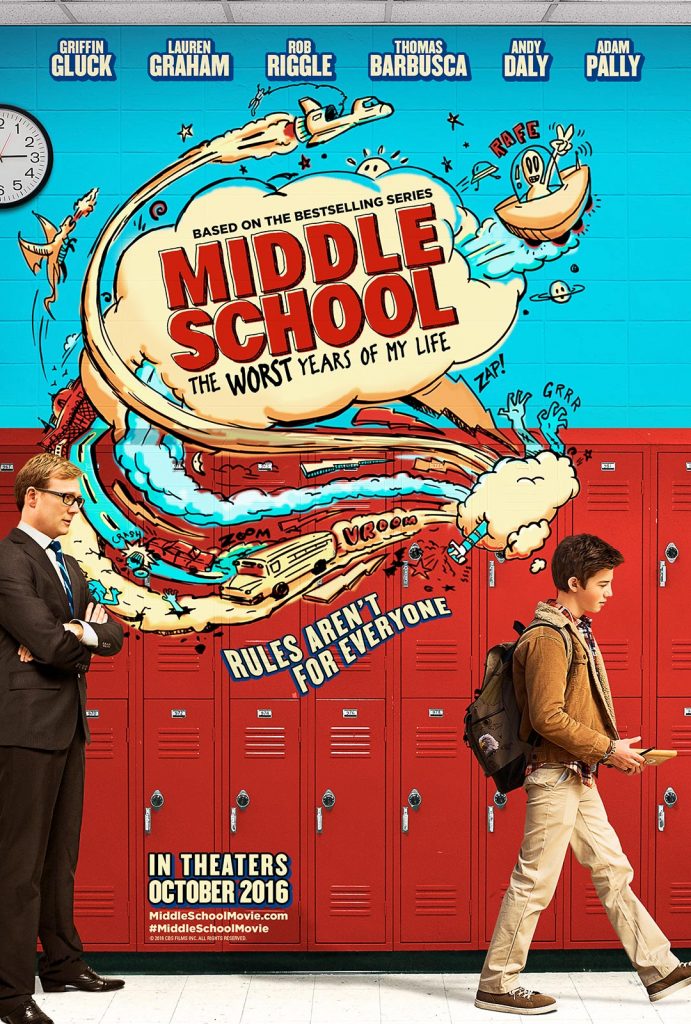 I want to start off this review by saying that I have not read the book. I also was in the worst screening ever with a bunch of school children and one of the supervisors got in a screaming match with one of the attendants. It was more interesting than the actual movie during the ending.

That being said, this film is a family fun movie that shouldn’t be completely ignored. It’s a fun movie with more heart than expected. If you need a family-friendly movie this weekend, then I would recommend this one.

This film is about a Rafe (Griffin Gluck), a kid, enrolling in the last middle school that will accept him. This new school is all about rules and formalities led by principal Dwight (Andrew Daly). He also reconnects with this kid named Leo (Thomas Barbusca) and together they decide to go against the rules of the school. Rafe isn’t completely helpless as he meets a girl, Jeanne (Isabela Moner), and his drawings that come to life in his imagination. Rafe, Leo, and his drawings start to take over the school with these insane pranks. On the flip side, his sister, Georgia (Alexa Nisenson), acts as his mom and tries to control him. His actual mom (Lauren Graham) is trying her hardest to support the family and starts to lean on Bear (Rob Riggle).

This movie has great performances from the always flawless Lauren Graham and newcomers: Griffin Gluck and Alexa Nisenson. They work together like a family and I was rooting for them the entire time which is a rare sight for me in this type of movie. I thought Andrew Daly and Retta were great as the school faculty and Rob Riggle pulled out a good performance as the “pseudo step” dad of the film.

The best part of the film is the imagination that is shown through Rafe. Either through his drawings or his prank ideas, Rafe’s imagination is in full force. The animations are new and different. His drawings literally take over the story at points and there was no backlash from me. I genuinely enjoyed Rafe’s take on school and liked his kid-like joy. I like to think that not all of the things that Rafe did were real, but they were things that every kid wants to do at the time. The movie just shows you what would happen if you actually did it.

Unfortunately, the B-story doesn’t hold up compared to the A-story. This doesn’t destroy the movie in any way, I just thought it was a little cliché and the rest of the movie felt so fresh and original that it took me out of it.

The humor is hit or miss. It’s not vulgar or anything. Although, there are jokes that can lead into more vulgar ones. I thought that about 50% of the jokes made me laugh which is actually quite high. I think that some of the jokes were great, while others felt like I’d heard them before just in a different voice. I wouldn’t count this movie out though for its lackluster humor because it has so much more to offer.

The pacing falls apart at the end. I thought the pacing was great until act 3 that felt longer than acts 1 and 2 combined. It also feels like it should end 3 or 4 times before it actually does. I didn’t mind it, but it definitely confused the kids that were in the theater. I would just say be weary of it because it made me feel restless.

Overall, if you want to see a movie this weekend with the family, this is not the worst choice. The soundtrack is great (and expensive). I had a surprisingly great time. I would recommend this movie to anyone looking to have a family friendly time. It’s definitely the light side of releases this week in comparison to The Birth of a Nation and the Girl on the Train. Also, get ready to cry. The ending got me.