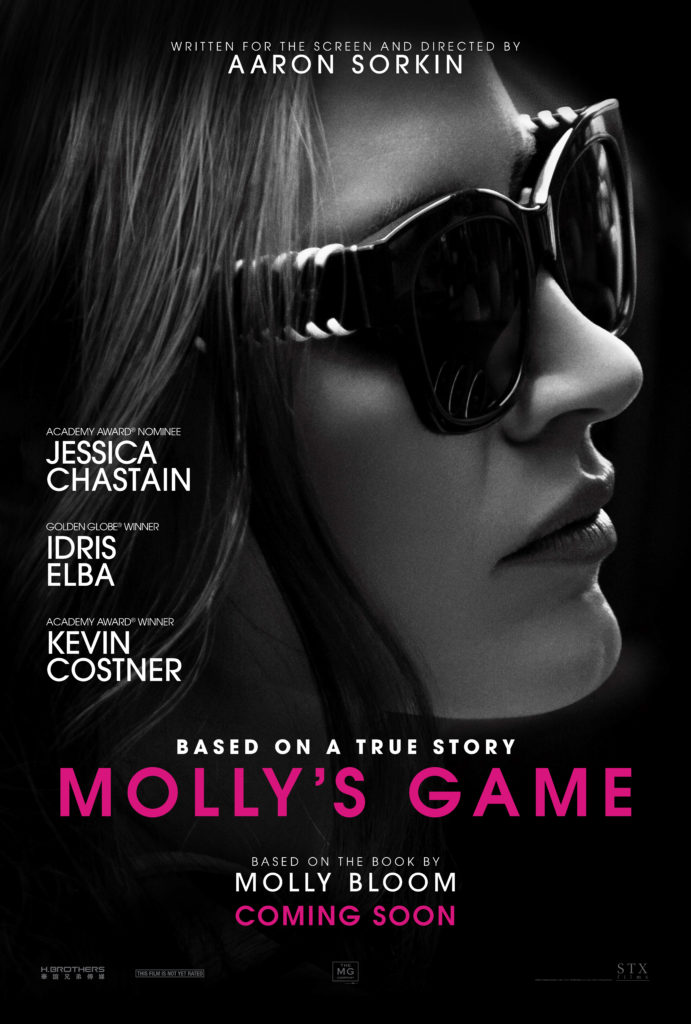 MOLLY’S GAME – A Review by Cynthia Flores
Aaron Sorkin's new film is fast-talking, exciting, brilliantly acted, and a pleasure to watch.  Remember this is the guy that honed his skills as an outstanding American playwright before he gave us his first film, A Few Good Men.  Let's just say he sets the bar pretty darn high.  His newest film, Molly's Game, doesn't disappoint.
It tells the true story of Molly Bloom (Jessica Chastain), an Olympic-class skier who suffered a tragic accident while she was qualifying for the Olympics.
We meet Molly when the feds break into her apartment, guns at the ready.  She explains in flashbacks how it all came to this moment.  Her drive to become the best Olympic skier pushed on by her overbearing father Larry (Kevin Costner) and steel will to stand out in such an accomplished family of winners.  We see her injury at the qualifying rounds.  She tells us how after the end of her skiing career she fell into being an assistant to a man that ran an illegal poker game in LA.  How she ultimately created her own game, stealing his clients, and built it up to be the world’s most exclusive high stakes poker game.  All this hustle and brilliance and at the end she was left with no money because the feds tied it up after they arrested her.  And the autobiography she wrote was barely paying for her living expenses.  At this low point, she’s having to convince Charlie Jaffey (Idris Elba), a top trial lawyer to believe in her and take her case on the promise that she would pay him back later.  It’s a wild ride of a story and the fact it really happened makes it even more impressive.
I think the choice of using Jessica Chastain in this lead was brilliant casting.  She’s done other characters similar to this.  You know, steel-willed, fast-talking, beautiful, powerful women in films like Zero Dark Thirty and Miss Sloane but in this part she gets to show a vulnerability that makes her more relatable.  I loved the scenes she had with her father later in the film.
Molly’s Game is a great film with an Oscar nomination worthy performance from its lead.  If you like smart, well-written movies then this one's for you.  I give it a solid A rating.
Directed by Aaron Sorkin
Written Molly Bloom, Aaron Sorkin
Rated R
Selig Rating A
Running Time 2hr 20min
Drama / Biography
Limited Release Dec 25th Angelika Dallas, AMC North Park Cinema 15, CTRION Look Cinemas 11, Cinemark West Plano 20 XD, Cinemark Legacy Cinema 24 XD Wide release Jan 5th
Starring: Jessica Chastain, Idris Elba, Kevin Costner, Michael Cera, Chris O’Dowd
The Selig Rating Scale:
A – Excellent movie, well worth the price.
B – Good movie
C – OK movie
D – No need to rush. Save it for a rainy day.
F – Good that I saw it on the big screen but wish I hadn't paid for it.
Tags from the story
Aaron Sorkin, Idris Elba, Jeremy Strong, Jessica Chastain, Kevin Costner, Michael Cera, MOLLY'S GAME, STX Entertainment
Facebook Twitter Pinterest
LinkedIn Email