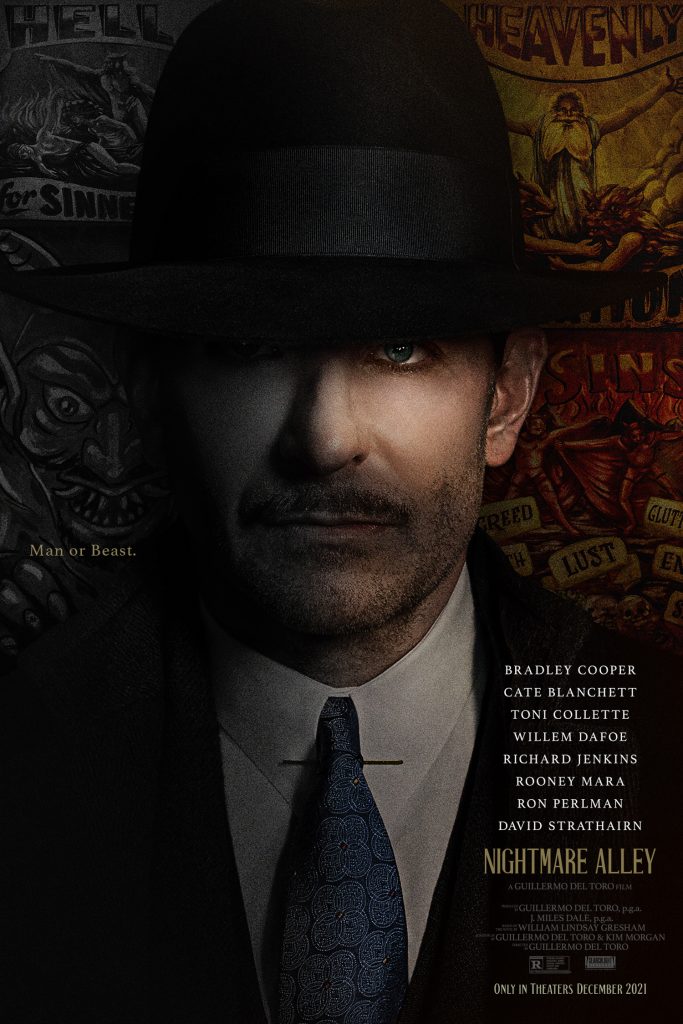 Director Guillermo del Toro is the master of moody, atmospheric films. With Nightmare Alley he has given us a thriller in full-blown film noir style.  This style of filmmaking comes from the French “dark film” genre made popular in the 1940s and 1950s. Mostly shot in black and white, these films had stark lighting effects and all manner of corrupt and brutal criminals with slinky femme fatales. These types of films used lots of flashbacks and had intricate plots. All the stories had an underlying existentialist philosophy. Think of great crime dramas such as 1944’s Double Indemnity or 1946’s The Big Sleep.

In Nightmare Alley, when charismatic but down-on-his-luck Stanton Carlisle (Bradley Cooper) gets a chance to work in a small seedy traveling carnival, he takes it. It’s the kind of place where no one cares where you come from because you are now one of them. It’s in this world filled with macabre shocks and wonders that he first learns about the geek act from Clem Hoately (Willem Defoe) the manager of the carnival.

His act as a mentalist and psychic makes them famous and well-paid. He and his now-wife Molly perform in only the ritziest of venues. Far from the lowly carnival life where they met. Stanton’s fame causes him to catch the eye of Lilith Ritter. She is a stunning psychiatrist to the wealthy elite of New York society. This sets in motion a series of events that puts Stanton on the road to his destiny.

Nightmare Alley departs from the otherworldly elements of his past movies that he is known for. I mean, he won an academy award for a film about a sea monster falling in love with a cleaning woman. That being said, his storytelling abilities and his eye for creating worlds you live in with the characters up on the screen are in sharp focus here. Not to mention singlehandedly adding Cate Blanchett’s searing portrayal of psychiatrist Lilith Ritter to the annals of femme fatale history. Blanchett’s character could go toe to toe with Lauren Bacall’s infamous Vivian Rutledge as far as producing heat and sizzling steam on screen.

When asked what drew the sought-after director to this project Guillermo del Toro is quoted as saying:

“I was very interested in a story about destiny and humanity. Stanton Carlisle is a man who is given all the elements to change his life. He has people who believe in him, who love him and trust him. Yet his drive and his own hubris are so strong that they turn him away from that.”

I give Nightmare Alley a 4.5-star rating. It’s a stylized hardboiled look at the concept of being born bad – a karmic, carnie tale. This movie has the mythic quality and probing humanity that defines such del Toro classics as Pan’s Labyrinth and The Shape of Water.  In other words, mask up and go see this on the big screen of a theater near you.

Written by: Guillermo del Toro, Kim Morgan, based on the book by Lindsay Gresham