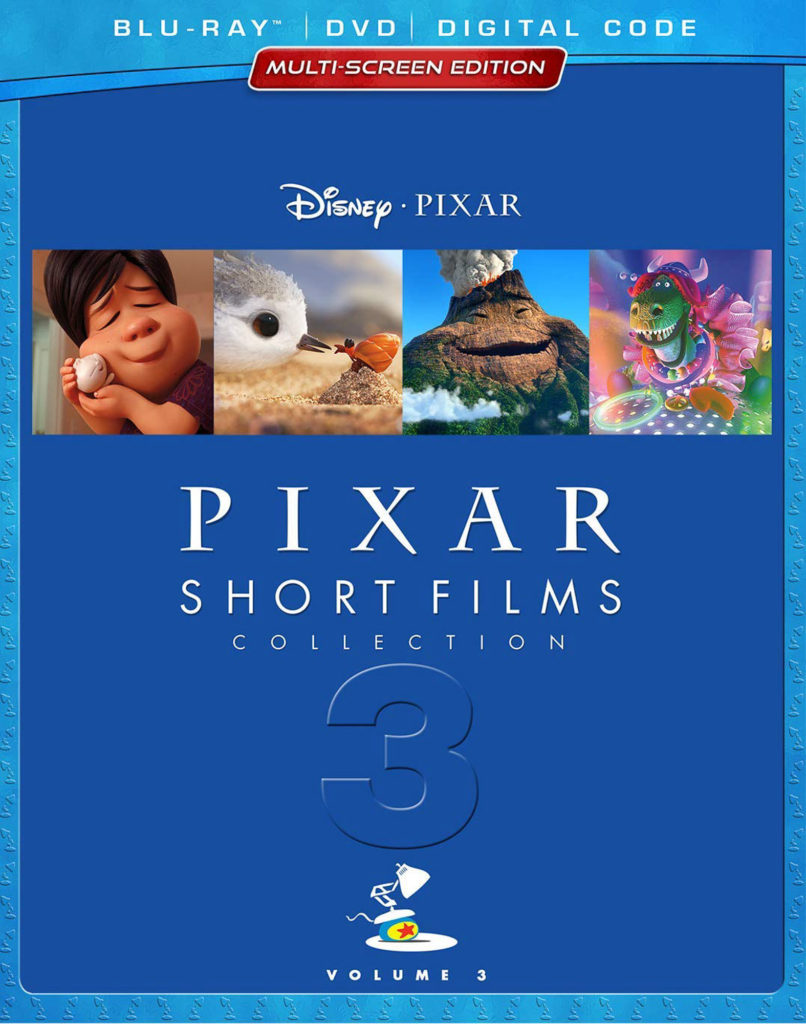 PIXAR SHORT FILMS COLLECTION: VOLUME 3 – A Blu-ray/DVD and Digital HD Review by John Strange
November 22, 1995 was a red letter day for me.  It was the day Toy Story premiered to the world.  It was our first exposure to the crazy talents that make up this wild company!  Since then, movie after movie, they have continued to bring us excellent films with enduring stories and characters.
We get not only these amazing feature films, but equally amazing shorts preceding them!  Who could ask for more!  Starting with Toy Story where we also received Tin Toy (which went on to win the Academy Award for Best Animated Short Film) the shorts have continued to be as amazing as their feature brethren!
Best known of these shorts, For the Birds, came to us with Monsters, Inc.  The short about birds on a wire grabbed our attention and gave us a lot of great laughs.  For the Birds won the Academy Award for Best Animated Short in 2001.
Pixar has acknowledged our love of their short films with special offerings of groups of these animated jewels.  My newest blu-ray review is Pixar Short Films Collection: Volume 3.
Volume three has eleven of the shorts plus two "mini-movies" and a short documentary on the making of Bao.  Additionally we have introductions and director commentaries on all eleven shorts.
All of the shorts are outstanding but a few are super stars.  Bao, Lou, and Lava each grabbed me.  Bao is a sweet story of a mother's love without a single word of spoken dialogue.  Lou is a story whose heart is one possible cause of why kids become bullies and how one such bully is redeemed.  Lava is a love story with a great musical score and an ending that makes you smile.
I have to say that I loved ALL of the offerings.  Each is different and amazing.  The commentaries give us additional information that make them even better.  Among the shorts we have films that are light-hearted, dark and scary, and love stories that make you sing along with the music.
The two mini-movies are fun and wildly different.  While I like the Cars-related Miss Fritter’s Racing Skoool, the Finding Dory-related Marine Life Interviews was my favorite.  They nailed it.
This is a disk for all lovers of animation.  I can't believe that I don't already have volumes 1 and 2!  At an hour and sixteen minutes, the time spent is relatively low (about the same as watching a feature film) but the enjoyment is off the charts.  This is a must have and I rate it at BRAND NEW on our scale.
Directors:
Cast:
Short Films (with Run Times):
Extras:
Specifications:
Runtime:
Studio:
Release Date:
Region:
Website:
MPAA Rating:
Selig Rating:
Selig Rating Scale:
BRAND NEW: Should add to your DVD collection at any cost
SALE ITEM: Worth owning, but try to catch it a sale
SECOND HAND: Plan to get it, but wait to buy it used
RENTAL: Worth taking a look at, but not owning
COASTER: Pick it up at a garage sale and use it for drinks
PULL!: Makes a great Trap Shooting target
Tags from the story
Bao, Disney-Pixar, Lava, Lou, Piper, PIXAR SHORT FILMS COLLECTION: VOLUME 3, Riley's First Date?, Sanjay's Super Team
Facebook Twitter Pinterest
LinkedIn Email