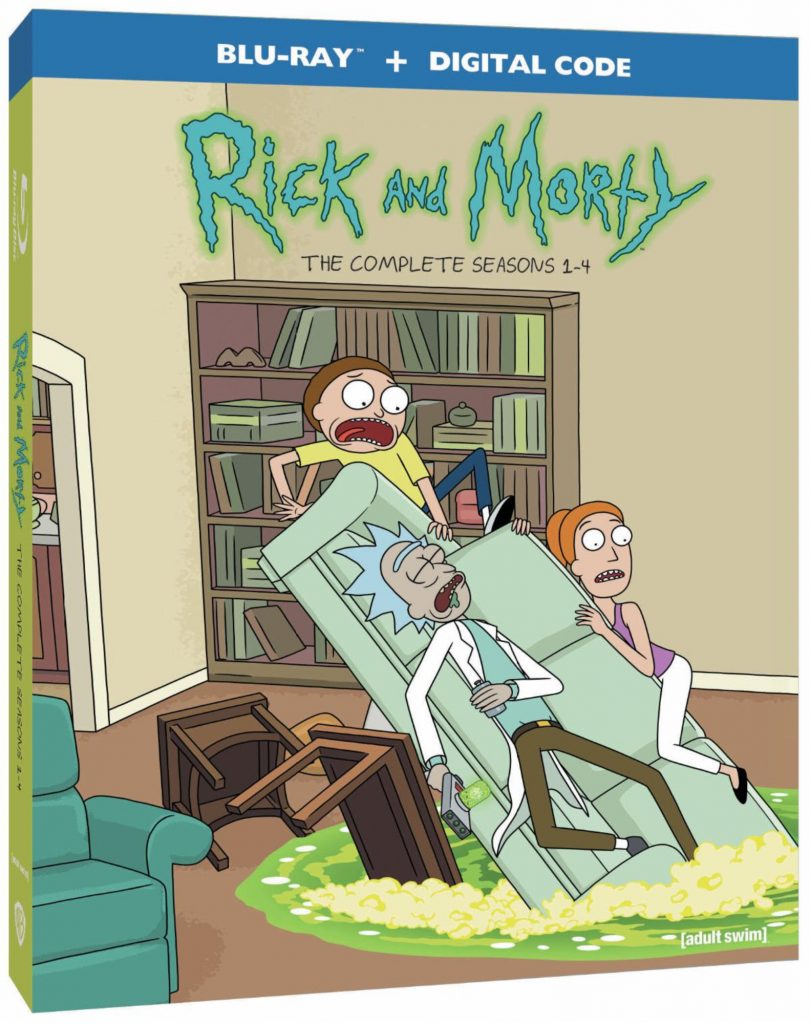 RICK AND MORTY: SEASONS 1-4 – A Blu-ray/DVD and Digital HD Review by John Strange

For those of you who read my review of Rick and Morty: Season 4, you may be shocked that I agreed to review the whole series thus far (Seasons 1-4).  To be honest, I wanted to see what I missed in the first three seasons.  Would it change my overall perspective on this show?

To be honest, no.  Mind. Blown.  But not really in a good way.  At all.  This is a juvenile male romp into every disgusting scenario that these perverted minds could imagine.  And their imaginations are… WAY off plumb as the oldsters in my life would have said (had they been tied to a chair and subjected to this show).

This show has been hugely popular with an audience of fanatic followers.  I am NOT one of them, but I appreciate the effort and work it takes to produce ANY show.  To make an animated show is orders-of-magnitude more difficult than many mainstream shows as each frame has to be drawn and then the audio track must be synced to that flow of images.  All of that effort is front-ended by a group of writers figuring out a basic premise for each episode and then fleshing it out in accordance with the show’s “bible”.

If you are interested in buying this home offering, I probably hacked you off at least a little (or maybe more).  This is not my intention.  I am simply trying to give the “regular” folks some sort of base to start their Rick and Morty journey.

The stories are filled with wild ideas that flow and slither all over the place as the very amoral Rick and his grandson Morty have adventures that would petrify the average human.  Some are hilarious, some are not.  Some pursue interesting ideas and concepts, but most are closer to plain weird.

Another good way to show you how popular the show is, this is a list of Hollywood folks who have lent their voices to the show: Sarah Chalke, Keith David, Alan Tudyk, Keegan-Michael Key, Susan Sarandon, Claudia Black, Clancy Brown, Phil LaMarr, Sherri Shepherd, Dana Carvey, David Cross, Alfred Molina, and Matt Besser.  Recognize any of these names from your favorite films and TV shows?

The extras for this offering appear to be whatever was offered on the disk when the individual season came out for home consumption.  The extras for each season reside on the Blu-ray disk with that season’s episodes.

The season one extras open with a “Behind the Scenes” featurette that is, well, different.  It looks to me like they shot it and then decided it was too vanilla, so they reshot the interviewer’s side of the video using an annoying person who ad-libs way too much.

The commentaries (usually one of my favorite parts) are mixed with the episodes.  The deleted scenes aren’t under the Special Features menu option.  It’s listed with the episodes under the Episodes menu selection.  After watching them, good call on deleting these scenes.

If you let the disk sit there running in the menu area, you are entertained by a selection of music from the minds behind the show.  My favorite, “I’m a Flu Hating Rapper”!

Season two’s extras open with the deleted animatic scenes.  The butthole ice cream parlor was a new low.  I am so glad it was cut.  Honestly, I’m glad they were all cut.

Then we have “Rick and Morty Season 2 Premiere Party Featuring Chaos Chaos”.  If you like this band’s music and the occasional drawings done on the electronic white board over their heads, this is one you’ll enjoy.  I liked but didn’t love it, not 43 minutes worth.

Next up were the animatics of all of the episodes.  In there are a few interesting bits that didn’t make the final cut.

Commentaries are found with the episode list utilizing an on/off switch.  The crew take the same attitude toward the commentaries that they do the episodes.  The difference?  We learn the logic behind their madness.  Frightening… but cool.

The third season has the regular (or irregular, if you will) commentaries with the crew.  This season also has a set of commentary tracks starring Courtney Love and Marilyn Manson.  These are… interesting.  Mind. Blown.  Actually, a very interesting listen!

The featurettes under ‘“Inside the Episode” for Every Episode’ are, to me, the true commentaries for the season.  They talk about the behind-the-scenes discussions and decisions that shaped each episode.  I loved these!

“Inside the Recording Booth” is a kind of cutesy featurette that has both good and bad aspects.  Good – watching the voice actors and producers working on the dialog takes.  Bad – the cutesy, forced, polite good-byes to the talent as they complete their lines.  (in other words, just what you would expect from guys told they “have to make nice for the DVD”.)

“Origins of Rick and Morty Part 1 & 2” was what I have been looking for since I first heard of this series.  The two part-er tells the story of how the creator’s idea evolved into the Adult Swim series.  I LOVED this!

Season Four was reviewed by me last September (2020) when the season was released separately.  The Special Features give us a great view of the process of making the show.  We meet the animators and directors and listen and watch them doing their artistic thing.

The commentary tracks are not given to us, but we still get the “Inside the Episode” for the episodes which gives us better episode commentaries anyway, so I’m satisfied.

Also in the Special Features section, I loved watching the “Prop Process”, “Character Creation”, and “Animation Challenges” featurettes because they appealed to the wanna-be artist in me.

Overall, the extras for the four seasons are as eclectic as the show itself.  The minds displayed give us a bit of the somewhat juvenile mentality/aesthetic we have come to expect from anything labeled “Rick and Morty”.  But there is one extra I wasn’t expecting, one that the show’s faithful fanatics, I mean fans, will want!  A POSTER!  It’s 18”x24” that depicts the family in a typical chaotic scene, battling huge odds.

The packaging is decent.  The box has a couple of images from episodes, one on either side of the box.  The case has a wrap-around image from an episode without any printer words or logos.  The disks have faces reminiscent of characters from the show, a different one on each.

Overall, this is a great offering for the fans of the show.  You may have the individual seasons but you don’t have the poster so this is a 4-star must have.  For the others of you out there?  This is a 2-star mind-warping collection that you will probably run away from after a few minutes BUT you also might be sucked into the ranks of the fanatics.  Watch at your own risk.