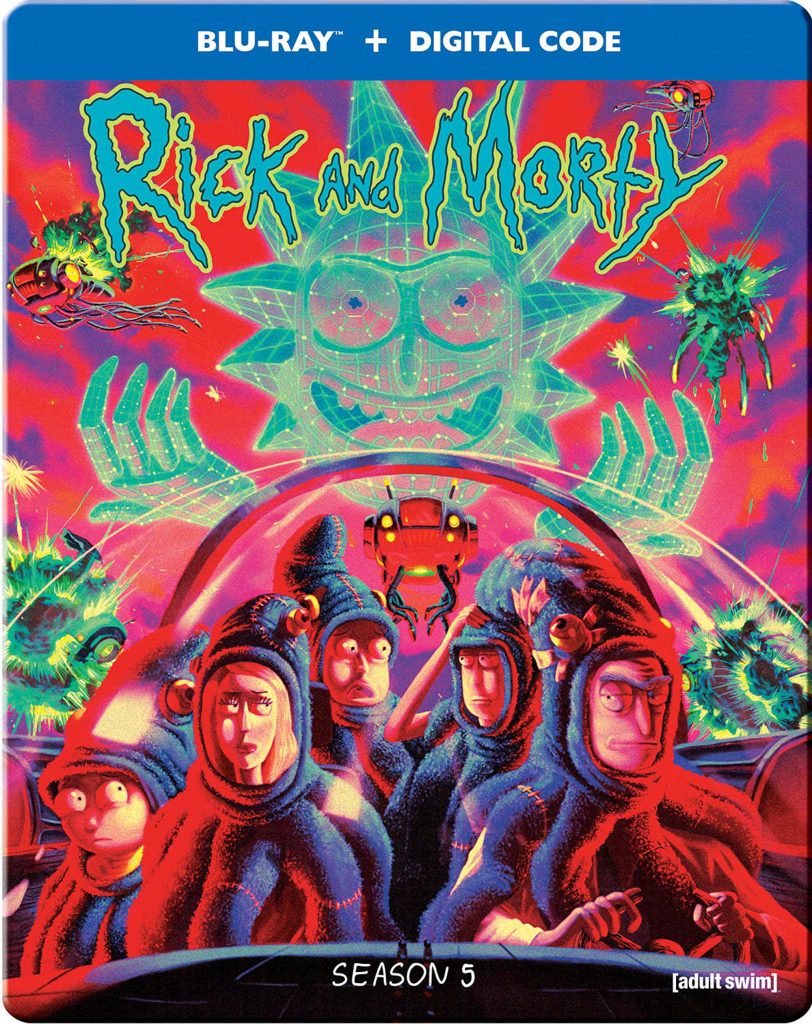 RICK AND MORTY: THE COMPLETE FIFTH SEASON – A Blu-ray/DVD and Digital HD Review by John Strange

Rick and Morty of the Adult Swim cable network is an acquired taste.  The staff who bring us this animated series are “different” as the series’ humor proves.  The jokes in the foreground of the show are more vulgar than anything that Fox would dream of getting past the network censors.  In fact, two of the bonus extras (“B-Story Generator Vol. 1 and Vol. 2”) in this offering speak to where they get some of their wilder (perhaps weirder?) story ideas.

Season five is proof that you can make pretty much anything funny if you can present it properly.  Combine excellent writing skills with an amazing crew of digital artists and colorists and you get a cool visual experience that grabs your need for low-brow smutty humor while smothering your sense of right and wrong for the duration of the episode.

As happens from time to time, I received this disk (the gorgeous Steelbook edition), on the Friday afternoon before its release date causing me to force-feed myself the episodes and bonus extras in order to get this review up on our site on time.

My viewing experience with Rick and Morty: The Complete Fifth Season was mind-blowing.  As each episode played on my television, my brain did its best to wrap itself around the complex plotlines that were at their core really simple plots wrapped in weird, sometimes gross, but decidedly simple ideas of what might be humorous, under certain conditions.

This season has an amazing load of weird stuff such as human turkeys, Boob World, Mr. Nimbus (one of my favorites), Evil Morty, decoy families (causing an Asimov Cascade), Planetina (and a doomed love affair), and having The President over for Thanksgiving dinner at the Smith home.

To supplement the season’s episodes, they have given us a nice selection of bonus extras.  The Rick and Morty team start off the bonus extras with “Fighting Gravity”: The Making of Season 5.  This one starts with a bit of a bitch-fest about the difficulties inherent in making an animated series amidst the pandemic before getting down to the basics of the job.  Tales of zoom meetings and loneliness were mixed with tales of collaborating and discovery.

Animation and Composting, Backgrounds and Coloring Rick and Morty give us extended background in what it takes to give the show its distinctive look and feel.  This is the type of featurette I love to see.  Series like this one rely on the magic of the artists.  This team is good and these featurettes show why.

We have two featurettes discussing the directing of individual episodes.  Directing Mortyplicity and Directing Rickmurai Jack are excellent behind-the-scenes snapshots.

Season 5 Hype is the short produced to introduce Season 5 to the public before its release.

The remaining featurettes, Inside the Episode, are each dedicated to giving a preview of one of the ten Season 5 episodes.  They are pretty good.

Overall, I liked the episodes a lot as well as most of the bonus featurettes.  Sadly, while the audio levels for the episodes were good, the audio levels for the bonus items were extremely low.  I had to crank the volume on my TV way up to hear them.  I also loved the look of the Steelbook case the disk arrived in.  And the Blu-raytm disk itself was a work of art, covered in drawings from the show.