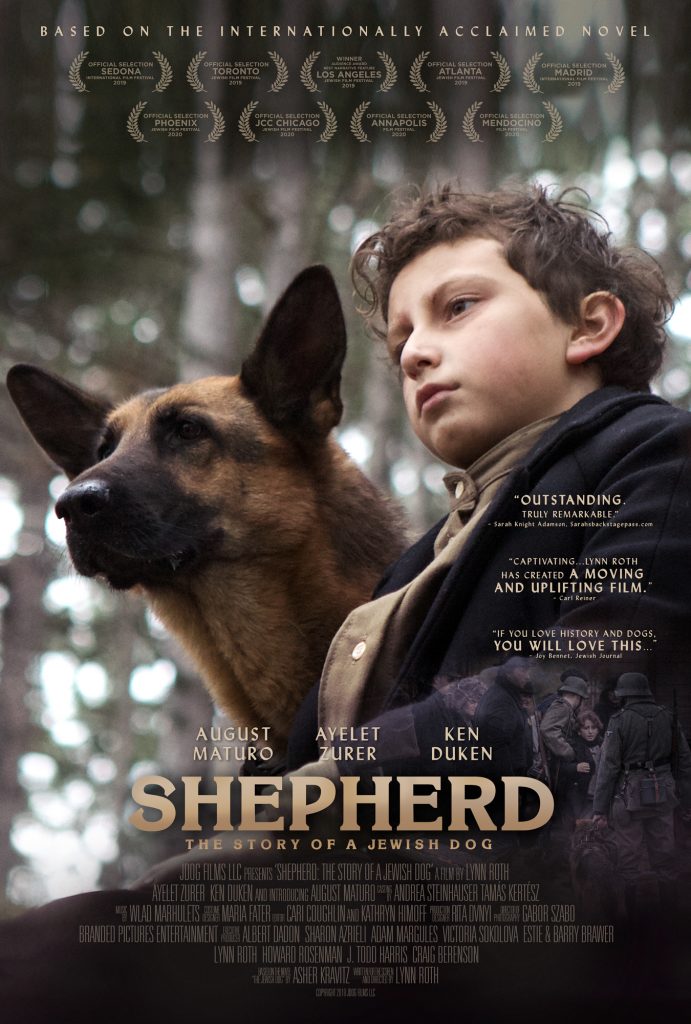 SHEPHERD: THE STORY OF A JEWISH DOG – A Review by Cynthia Flores

It’s been a long time since we have had a tender film about such a difficult subject as the Holocaust of WWII. In fact, it’s been since 1997s’ Oscar-winning film Life is Beautiful. In that film, the brutality was shown in a gritty way to make the humor contrast it. In this new family-friendly film directed and written by Lynn Roth, the grit of the horror is kept to a minimum in exchange for the unfolding of the timeless, unbreakable bond between a boy and his dog.

When asked why she wanted to make this story from the Israeli novel “The Jewish Dog” by Asker Kravitz, the director is quoted as saying:

From the moment I read the book, I knew that it would be my mission to make this movie. To take this unique premise…the trajectory of a dog during the Holocaust and make it a film that would be appropriate for the entire family. A film which parents and grandparents could view with their children and together they could learn or be reminded of a time in history that must not be forgotten.

This film Shepherd: The Story of a Jewish Dog is seen through the eyes of Kaleb, a German Shepherd born into a Jewish family in 1930s Germany. Kaleb is raised in a loving family where the youngest 10-year-old child Joshua (August Maturo), becomes his best friend. Times start to get tough for Jews living in Germany. When the Nuremberg Laws are passed forbidding the Jews to own pets, among other things, Kaleb is separated from his Jewish family. Bewildered as to why he is cast out of a loving home, ultimately, Kaleb becomes a street dog. He is captured then adopted by an SS dog trainer named Ralph (Ken Duken). Kaleb is renamed Blitz and trained to help round up and terrorize Jewish prisoners. He becomes one of the best guard dogs in the Nazi military. One day when a new trainload of prisoners arrives at the camp where Blitz and Ralph have been stationed, Joshua steps off of that train. A miraculous reunion takes place as Blitz rediscovers his unwavering loyalty to his young master Joshua. Together with the other prisoners, the pair attempt to escape the camp and begin the perilous journey to freedom.

The cinematography of Gabot Szabo H.S.C. for this movie is lush enough to convey the hardships of the situations without getting gritty. It helps support the way the dog’s perspective is put at the forefront of the film. In fact, what I liked most about the movie is that they chose to use no computer-generated or famous actor voice-over gimmicks of a talking dog. Instead, you have the soulful eyes of Kaleb and his instinctual reactions to what is going on around him to tell the story.

I give Shepherd: The Story of a Jewish Dog a 4-star rating. It’s a good family film that subtly shows the horror of what happened in WWII through the loving eyes of a dog.