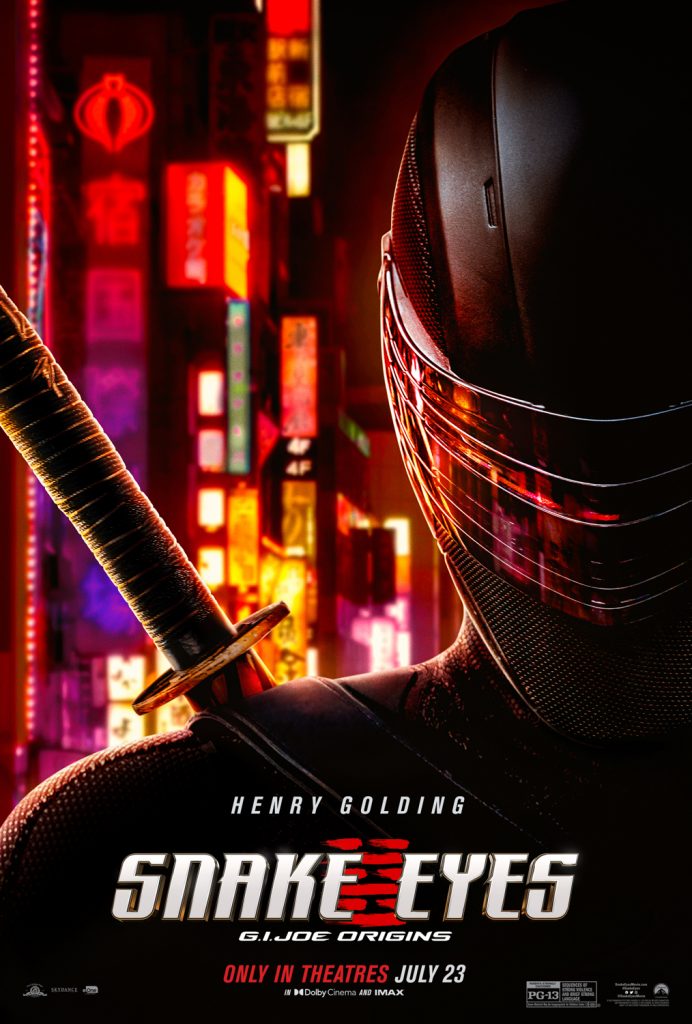 For some reason, everyone wants to re-invent or re-imagine their film franchises.  The decision to make these “origin” films isn’t new. The folks behind X-Men did it with Wolverine (X-Men Origins: Wolverine) in 2009.  The Star Trek franchise also did it in 2009 to give us a younger crew.  The Spiderman franchise has done it how many times?  Bottom line: This is an old idea that is a risky proposition no matter how you look at it.

I thought the G.I. Joe series (G.I. Joe: The Rise of Cobra and G.I. Joe: Retaliation) was doing okay.  I guess the filmmakers felt otherwise.

In this re-imagining of the origins of Snake Eyes, venerated member of the G.I. Joes, we start with the boy who would one day become Snake Eyes watch his beloved father killed.

This sets the boy on a life-long trail of vengeance with all of the pain that can bring.  His path eventually brings him to a place where he can find salvation, or death.  The heart of this film is the story of the young man dealing with his demons and coming into the man he was meant to be.

Is this the story told in the first two films of the G.I. Joe franchise?  Only a little bit.  Is it a good story, more fleshed out and complete than the first telling?  Yes, I think it is.

Does it have plot holes you can drive a Mack truck through?  Depending upon your attitude towards the franchise, you may think so.  Personally, I think the story was well told, with excellent action sequences, and a good script in the hands of good director acting talent and.

The fight choreography is well done.  The use of captions kept to a minimum so we can concentrate on the action on the screen.  And the cinematography is well thought out and performed giving us you great fights and some beautiful scenes in Japan.

I can’t in good conscience give the film 5-stars, but I can give is a solid 4-star rating.  It will be interesting to see what the filmmakers do with the franchise based upon this film.

Written By
John Strange
More from John Strange
BIG HERO 6 THE SERIES – BACK IN ACTION! – A...
Read More