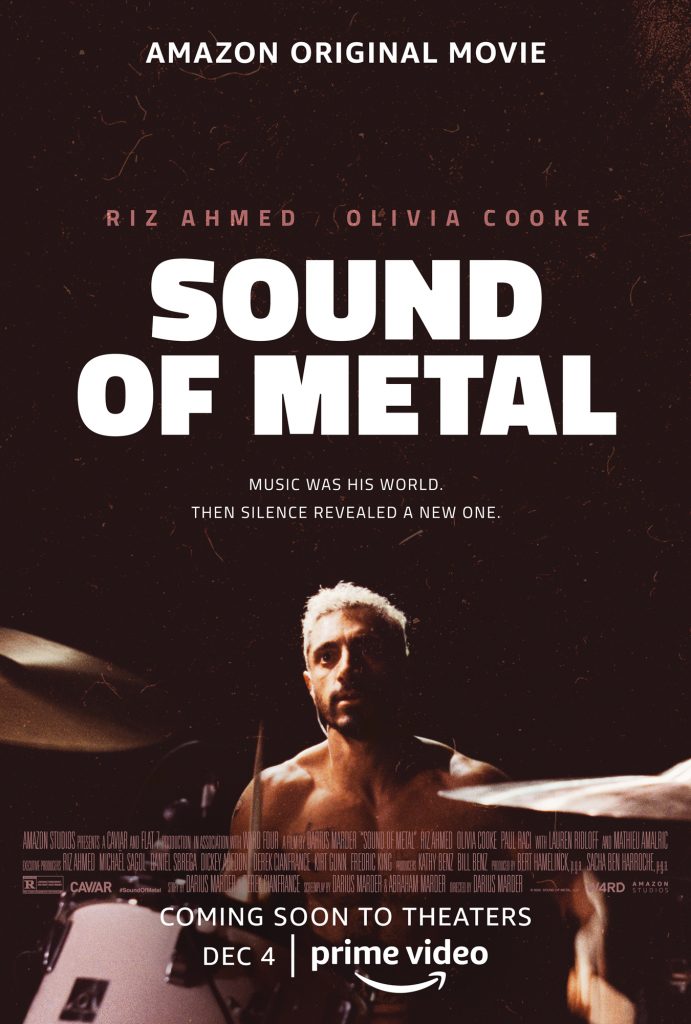 SOUND OF METAL – A Review by John Strange

Using closed captions and an approximation of what Ruben is hearing, Director Darius Marder has given us a film, Sound of Metal, that examines a young heavy-metal drummer as he is forced to acknowledge and face his rapid loss of hearing.

Ruben Stone (Riz Ahmed) and his girlfriend, Lou (Olivia Cooke), are heavy-metal music gypsies, moving around the country playing gigs as a duo called Blackgammon.  At each gig, it is harder and harder for the young man to follow his girlfriend’s lead until it finally comes to a head.

Ruben, a drug addict who is now four years sober, is sent by his sponsor to a special deaf community run by a very calm man named Joe (Paul Raci).  This is a smooth-running place where the deaf work and live together in harmony and Ruben is not prepared for this.  He isn’t prepared for the loss of both his phone and Lou.  But mostly he isn’t prepared to never be able to play the drums again.  He must work out what he DOES want from life.

This is a film about dealing with the dilemmas that life deals us without panicking.  And without giving up.  Ruben rails and Ruben fights the system, but he NEVER gives up.  It is a visual and auditory experience that really helps you to understand what Ruben is hearing and experiencing.

Marder’s technique works better than I would have expected.  As this film begins, this raw, extremely rough story doesn’t tell you that you will watch it raptly for next two hours, rooting for the drummer to regain his hearing and get on stage again.  Does he?  That is the reason for watching the movie, is it not?  Enjoy the ride.  I did.

MPAA Rating: R (for language throughout and brief nude images)