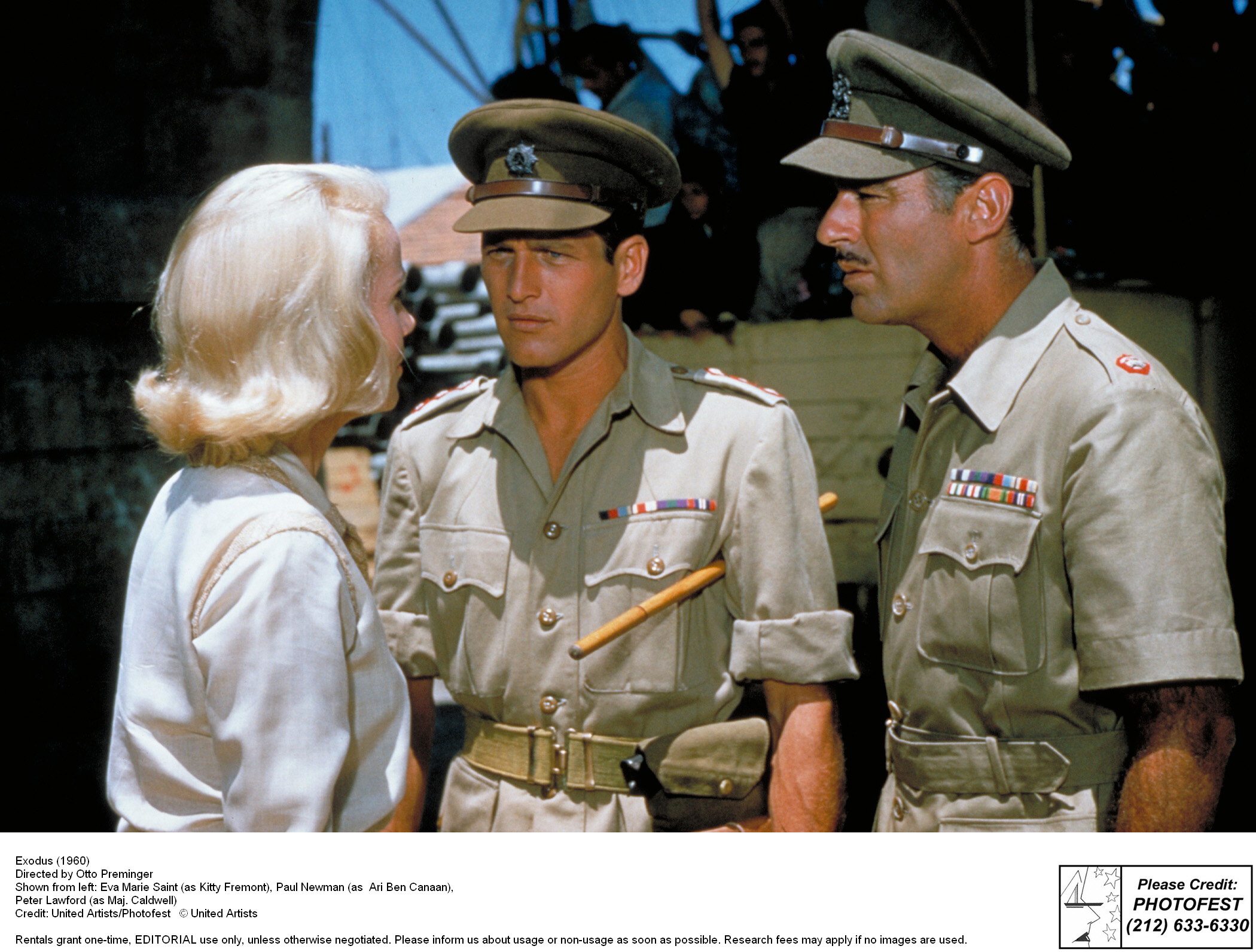 This September, TCM proudly presents The Projected Image: The Jewish Experience on Film, a month-long showcase of movies focusing on Jewish history and heritage as portrayed on screen. Airing Tuesdays throughout the month, the showcase will feature introductions by TCM host Robert Osborne and Dr. Eric Goldman, Ph.D. an expert on Yiddish, Israeli and Jewish film and adjunct professor at Yeshiva University. Dr. Goldman is the founder and president of Ergo Media, a distributor of Jewish film. He is also the author of two important books on the topic, The American Jewish Story Through Cinema (2013) and Visions, Images and Dreams: Yiddish Film Past and Present (2011).

The Projected Image: The Jewish Experience on Film will feature more than 20 films, including four that are coming to the network for the first time. Dr. Goldman assisted in curating the month-long programming event, which is divided into seven different themes. The Jewish Experience on Film will open Sept. 2 with "The Evolving Jew," which will include two versions of The Jazz Singer – Al Jolson's early sound film from 1927 and the 1952 remake with Danny Thomas. That same night, "The Immigrant Experience" will look at Jewish families transplanted from Europe to the U.S. and includes Joan Micklin Silver's Hester Street (1975) and Barry Levinson's nostalgic drama Avalon (1990).

On Sept. 9, TCM will devote the night to stories related to "The Holocaust," including two powerful classics from the 1960s: Stanley Kramer's Judgment at Nuremberg (1961) and Sidney Lumet's The Pawnbroker (1964). The night also includes the Orson Welles thriller The Stranger (1946), in which he co-stars with Edward G. Robinson and Loretta Young, and Edward Dmytryk's powerful drama The Juggler (1953), starring Kirk Douglas.

TCM will spend the evening of Sept. 23 with stories about "Tackling Prejudice." The lineup will feature such thoughtful adaptations as The House of Rothschild (1934), from a George Hembert Westley play; Gentleman's Agreement (1947), based on Laura Z. Hobson's bestseller; Crossfire (1947), adapted from a novel by filmmaker Richard Brooks; and Focus (2001, TCM premiere), based on a novel by Arthur Miller.

TCM's The Projected Image: The Jewish Experience on Film will wrap up on Sept. 30 with "Coming-of-Age" stories. The night includes The Young Lions (1958), with Montgomery Clift as a young soldier coming to grips with anti-Semitism during World War II, and The Way We Were (1973), with Barbra Streisand as a Marxist Jew who shares a bittersweet romance with a handsome gentile, played by Robert Redford.

Nearly every year since 2005, TCM has dedicated a month to examining how different cultural and ethnic groups have been portrayed in the movies. Several of the programming events have centered on Race and Hollywood, with explorations on how the movies have portrayed African-Americans (2005), Asians (2008), Latinos (2009), Native Americans (2010) and Arabs (2011). In June 2007, TCM examined Hollywood's depiction of gay and lesbian characters, issues and themes with the month-long Screened Out: Gay Images in the Movies. And in October 2012, TCM explored the ways people with disabilities have been portrayed with The Projected Image: A History of Disability in Film.

The Projected Image: The Jewish Experience on Film

Eric A. Goldman is founder and president of Ergo Media Inc., a New Jersey-based video publishing company specializing in Jewish-oriented video. Ergo Media was the pioneer in introducing Jewish and Israeli cinema on video in North America. Goldman is also film reviewer for New Jersey's The Jewish Standard.

Dr. Goldman is an expert and lecturer on Yiddish, Israeli and Jewish film and noted film educator. He is former director of the Jewish Media Service, which was a national clearinghouse on film and television for the North American Jewish community. At JMS, he helped launch the concept of Jewish television programming and film festivals across the country. Prior to that, he was curator of film for the YIVO Institute for Jewish Research, where he supervised the preservation of Yiddish films, and for many years he developed and moderated the film program at the Center for Jewish History and Yeshiva University in New York City. Eric Goldman was also a member of the Educational Advisory Committee of the United States Holocaust Memorial Museum in Washington.

Dr. Goldman has been teaching college for nearly two decades and he is currently adjunct professor of cinema at Yeshiva University and Fairleigh Dickinson University. In 2012-2013, he was film scholar-in-residence at the Mid-Westchester JCC. In 2000-2001, Goldman was adjunct fellow in cinema at The Center for Advanced Judaic Studies at the University of Pennsylvania. In the spring of 2004, he conceived and co-chaired a national symposium on "The American Jewish Experience as Reflected in Film," held at Queens College. He was also an educator fellow at the American Film Institute in Los Angeles. This summer, he was a fellow at Brandeis University's Schusterman Institute for Israel Studies.

Eric Goldman received a Ph.D. in Cinema Studies from New York University and was a fellow of the Max Weinreich Center for Eastern European Jewish Studies at Columbia University. He holds graduate degrees in Contemporary Jewish Studies and Theater Arts from Brandeis University and a B.A. from Temple University. For over a decade, he planned and moderated the Israeli film series, "Lens on Israel," at New York's 92nd Street Y and the Yiddish film series at Hebrew Union College; he was also one of the founders of the New York Yiddish Film Festival. In 1999, Eric became artistic director of the Jack Wolgin Jewish Film Festival, held in suburban Philadelphia. In 2006, he created the Ergo Media "Digital Filmmaking" specialty camp at the NJ Y Camps in northeastern Pennsylvania, which he continues to supervise. He also developed the "Israel Jewish Identity Film Project" and curriculum for the Avi Chai Foundation and the "PJ DVD Project" for PJ Library and The Steinhardt Foundation for Jewish Life.

Eric Goldman has written extensively on the Jewish experience in film. His new book, The American Jewish Story Through Cinema, about the American Jewish encounter with movies, was published in 2013 by The University of Texas Press. He is also the author of the newly revised and expanded Visions, Images and Dreams: Yiddish Film Past and Present (Holmes and Meier Publishers, 2011). Most recently, he authored a monograph on the American Jewish experience through the lens of cinema for American Jewish Committee. In 2000, Eric Goldman served as a juror at the Jerusalem International Film Festival. In the summer of 2011, he was film curator at the International Yiddish Theatre Festival in Montreal and in 2012 he curated the Ring Family Israel Film Festival at Yeshiva University. He is film curator for the upcoming International Jewish Performing Arts Festival, set to take place in New York in 2015. Dr. Goldman has also produced and directed for radio, television, video and film and has developed and authored over a dozen DVDs, including Yidl mitn Fidl, Hill 24 Doesn't Answer and Lies My Father Told Me. He won a Special Jury Award at the 1996 International Jewish Video Competition.

MLK/FBI – A Review by Cynthia Flores

“Woman in Motion: Nichelle Nichols, Star Trek and the Remaking of NASA” in Movie Theaters Nationwide on Feb. 2