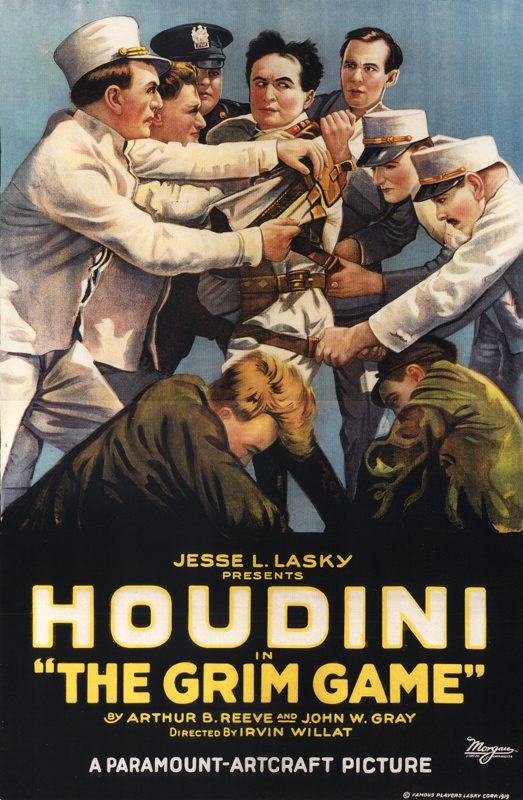 Turner Classic Movies (TCM) is bringing the long-lost Harry Houdini classic The Grim Game (1919) back to the public eye in a world premiere screening during 2015 TCM Classic Film Festival held March 26-29 in Hollywood. This much-sought-after film – a complete print of which was only recently rediscovered and brought to TCM for restoration – features the escape artist and legendary illusionist in one of his few starring roles. The film was discovered and the restoration was produced and restored by award-winning film preservationist and silent-film scholar Rick Schmidlin, whose credits include such landmark restorations as The Dickson Experimental Sound Film (1894/'95), Greed (1924), London After Midnight (1927), Touch of Evil (1958) and Elvis: That's the Way It Is – Special Edition (1970).

"The discovery, restoration and screening of The Grim Game is the perfect embodiment of the TCM mission to celebrate our cinematic heritage and share it with new audiences," said Charles Tabesh, senior vice president of programming for TCM. "We are thrilled to be collaborating with some of the most important figures in film preservation in order to bring this timeless classic back to the screen for the first time in decades."

In The Grim Game, Houdini plays Harvey Hanford, a young man who is framed for murder. As Hanford escapes from the police and goes after the gang of men who framed him, the movie offers numerous opportunities for Houdini to display his own skills as an escape artist, illusionist and stunt man. Among the most remarkable sequences is a mid-air collision between two airplanes that was actually a real accident caught on film and used in the story.

During the world premiere screening at the festival, composer Brane Zivkovic will be on hand to conduct a live performance of his new score for the film. Additionally, The Grim Game will make its world television debut on TCM later in the year.

Below is the complete story behind the rediscovery and preservation of The Grim Game, including restoration credits. Information about the other films added to the 2015 TCM Classic Film Festival can be found online at www.tcm.com/festival.

A Classic Rediscovered: How The Grim Game Came to TCM

In April of 2014, noted film scholar and preservationist Rick Schmidlin met with friends Dorothy Dietrich and Dick Brookz, who own The Houdini Museum in Scranton, PA, where they discussed having a lead on the long lost 1919 feature starring Harry Houdini, The Grim Game. The only known copy of the complete film was held by Larry Weeks, a 95-year-old retired juggler who lived in Brooklyn. Weeks had obtained the film from the Houdini estate in 1947, had only shown it a few times and had never been willing to sell it. Schmidlin decided to give it a try, knowing that his friend Charles Tabesh, senior vice president of programming for TCM, would be interested in obtaining the film for the network. Schmidlin eventually got in touch with Weeks and made arrangements to visit him to assess the condition of the film.

When Schmidlin arrived, Weeks showed him the two-film cans that he thought contained The Grim Game. After examining the film by hand, he let him know that TCM was willing to make an offer, and two hours of discussion, Weeks finally agreed.

Schmidlin had become friends with Brane Zivkovic, who teaches film and music composition at New York University's Tisch School of the Arts, where Schmidlin regularly lectures. After the two discussed The Grim Game, Zivkovic expressed his interest in composing and conducting the score for the film. Zivkovic also introduced Schmidlin to Paula De Stefano, the Barbara Goldsmith Curator for Preservation at NYU's Preservation and Conservation Department. Through De Stefano, Schmidlin arranged to bring Weeks to New York in June to screen the entire film and arranged to have NYU provide storage for the film in their on-site vault.

Leading up to this day was tense for Schmidlin, as he wondered if he had really found the complete version of The Grim Game. "If so this would be the first major project I've produced in 12 years. I felt as if this was the greatest adventure in my career and well worth the wait to find a long lost film desperate to be restored," said Schmidlin.

When they arrived at NYU, they examined the film and found that the total movie was five-and-a-half reels, not the five reels that had always been reported. They also had two reels of negative film. "Nothing was missing," said Schmidlin, "The film was a complete joy to see. The Grim Game is not just a long lost film from the silent era, but a really great and fun film that will surprise and entertain all."

The Grim Game restoration was produced and supervised by Rick Schmidlin, in association with The Barbara Goldsmith Preservation and Conservation Department, New York University Libraries, Kimberly Tarr, head of the media preservation unit, and Benjamin Moskowitz, lab supervisor who helped prepare the restoration. The digital restoration was carried out by Thomas Eberschveiler at Metropolis Post in New York City, with John Rizzo as project manager and Brian Boyd as colorist for the black-and-white timing.

Brane Zivkovic – who teaches music composition for film and television at the Kanbar Institute of Film and Television, Tisch School of the Arts, NYU – composed and conducted the score for The Grim Game. The music was recorded under the supervision of music contractor Dave Eggar at Dubway Studios, New York, with recording engineer Mike Judeh. It is being mixed by Matt Rocker at Underground Audio, New York.

Consultants for the restoration of The Grim Game are Dorothy Dietrich and Dick Brookz, owners and operators of The Houdini Museum in Scranton, Penn.

Written By
Dev Shapiro
More from Dev Shapiro
Fans who pre-order The Hunger Games DVD at their local Blockbuster through...
Read More