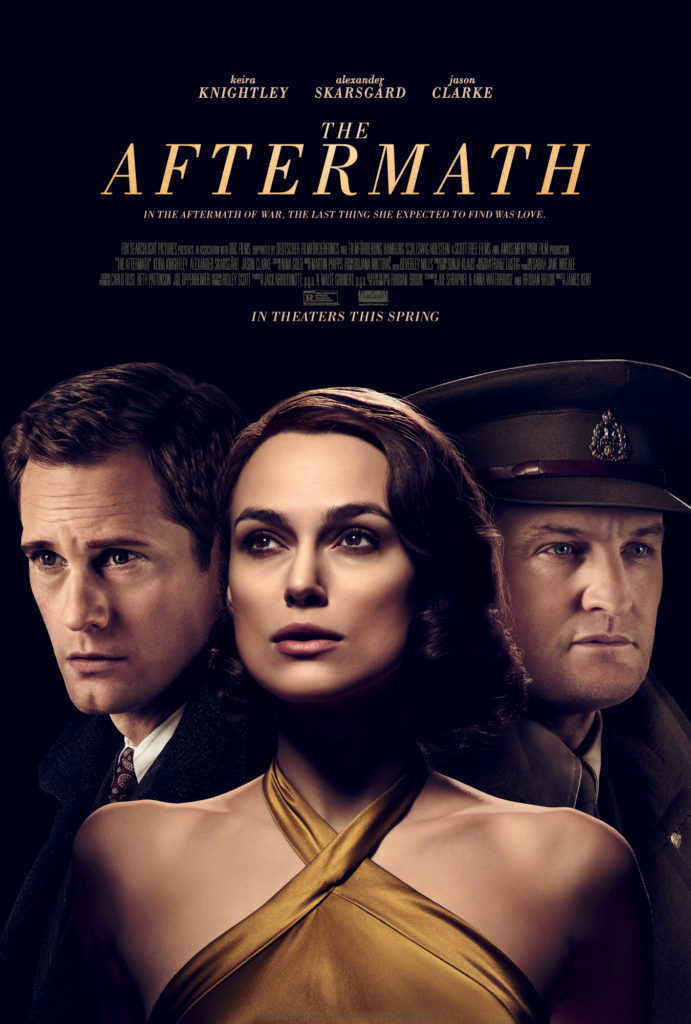 THE AFTERMATH – A Review by Cynthia Flores

First off, The Aftermath is not just a romance film.  If it were just that, it would fail miserably.  Instead, it’s a lush, brilliantly acted, study of grief.  The grief of parents, Rachel (Keira Knightley) and Lewis (Jason Clarke) Morgan dealing with the loss of their young son Michael (Frederick Preston).  The grief of a man, Stephen Lubert (Alexander Skarsgard), a widower who lost his wife and now his whole way of living.  The sadness of his teenage daughter Freda (Flora Thiemann) who not only has to deal with her mother being killed in the war but now has to watch as they lose their home to the British Army.  All of this against the backdrop of the grief of the German nation after losing the war.  In particular the city of Hamburg where this story takes place.   This city had more bombs dropped on it in a single weekend than England had dropped on them in the whole of the war.  So, if you go into this film knowing all that, then I think you’ll enjoy it a lot more.

We start off at a train station five months after the end of WWII where Lewis, a British Colonel, is meeting his wife Rachel who’s joining him in Hamburg as he does his work for the military.  He’s there amidst the devastation of the city to help bring law and order to the town.  Lewis is also very moved by the plight of the cities’ people and all the hardships they are now enduring.  He understands the animosity towards him and his men from these vanquished people.  His wife Rachel, however, doesn’t feel the same empathy for the Germans because she blames them all for the loss of her son Michael in an air raid bombing during the war.  So, you can understand her apprehension when Lewis asks her to let Stephen and his daughter Freda stay in the huge home they are assigned to live in while he works in Hamburg.  It was the lavish home of the Luberts’ and comes with servants, art everywhere, and a grand piano that his late wife loved to play.  The estate escaped damage during the war, and now the British army has told the Luberts that it has been seized for use by the military and that they must relinquish it and be resettled in camps.  Lewis tells Rachel that there’s really no place to put them in the overcrowded camps and the house is so big that they can move upstairs to the attic and not be in the way.  She relents but does not want to interact with them, at least not at first.

With her husband away at work most of the time and the apparent strain on their marriage since the loss of their only child, Rachael feels isolated.  She spends most of her days at home alone.  She doesn’t speak German so she can’t talk to the staff.  Stephen speaks English well, so they start to talk to each other while he tries to stay out of her way.  The fact that Stephen is good looking is not the only reason that Rachel is attracted to him.  Instead, it’s finding a kindred soul that’s drowning in grief as she is that starts all the trouble.  Rachel wants to share her pain with her husband, but he uses work to push her away instead of dealing with his own broken heart with her.

Is there hot steamy sex between Rachel and Stephen?  Hell yes!  Is it believable that being left alone so much of the time that the two would find solace in each other’s arms?  Absolutely.  When Stephen finally gets his traveling papers, proving he was not a Nazi during the war, is it believable that they’d want to run off together?  Mostly yes.  You have to remember that Rachels’ husband Lewis is a good man and they have a history together.  Will Rachel choose a fresh start with the handsome Stephen or will she stay with her husband?  Well, you’ll just have to see the movie to find out.

The Aftermath is not a perfect film.  There’s a lot of context and pain that the director, James Kent, tried to fit in a movie that is less than two hours long.  However, the film did capture the sadness of loss and the bittersweet nature of moving through it.  So if you’re a Keira Knightly or Alexander Skarsgard fan you’ll enjoy them both in this period piece drama.  I give this film a solid B+ rating.