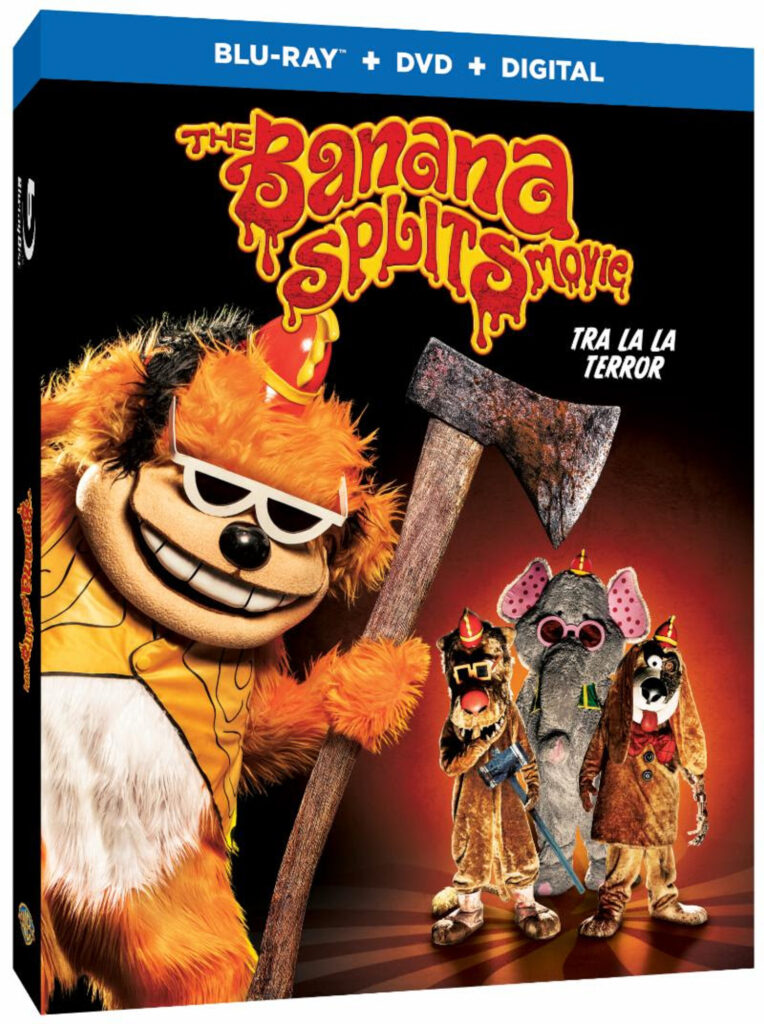 Sometimes when your childhood memories are massaged by writers and directors what you get is nowhere close to your memory.  Such is the case with The Banana Splits Movie.  Writers Jed Elinoff and Scott Thomas with director Danishka Esterhazy have taken a campy kids-show from the late 60s and re-envisioned it as a horror movie.

Running on NBC on Saturday mornings from September 7, 1968, to September 5, 1970, and in syndication from 1971 to 1982, the show full of music and fun was a delight for kids of my era to watch.  William Hanna and Joseph Barbera had Sid and Marty Krofft to design costumes for a television show which would feature both animated and live-action segments.  The show had a large fan base (including me) and even had a fan club (yep, I was a member).

I’m not sure what I expected to see when I put the disk into the Blu-ray player but what I got wasn’t even close.  The film starts with the premise that the original show was never canceled and still runs today.

We have a good kid, Harley (Finlay Wojtak-Hissong), who has grown up watching the show and idolizes Bingo, Fleegle, Snorky, and Drooper (aka The Banana Splits).  For his birthday, his mom, Beth (Dani Kind), has gotten 5 tickets to a live taping of the show.  Harley’s best friend is sick so Beth gets another friend (sort of), Zoe (Maria Nash) to go with the family (Beth, Harley, his older brother Austin (Romeo Carere), and Harley’s father Mitch (Steve Lund)).

Arriving at the show’s soundstage and lining up with the rest of the audience is one of the last true “Hollywood” adventures left in this world.  Once in line, the show’s page Paige (Naledi Majola) takes everyone’s phones before they are allowed to go in.

The film shows us the dark underbelly of the show.  This prepares us for the real action of the movie.  DO NOT let kids watch this movie.  It is not all sweetness and light.  It’s not a psychological thriller.  It’s an old-fashioned gory blood-fest.

It becomes dark and grimy which, according to the extras on the disks, is exactly what the filmmakers wanted.  “Banana Splits: Behind the Horror” and “Terror on the Set” give us a brilliant view of the filmmakers and actors talking about their feelings about the kid’s show and their desire to take what they describe as a creepy and take it to its gruesome conclusion.

”Breaking News! The Banana Splits Massacre” is the remaining extra on the disks.  It’s basically a trailer for the film.

I wish we had more Harleys in this world.  His belief in the characters’ goodness is amazing as is his own innate goodness.  That said, if you were a card-carrying member of The Banana Splits Fan Club, this may not be the film for you.  If you like your horror a bit on the bloody side, this one may tickle your imagination.   For me, it was interesting and will probably provide fodder for some nightmares as I come to grips with the deaths of some of my boyhood heroes, but I didn’t love it.