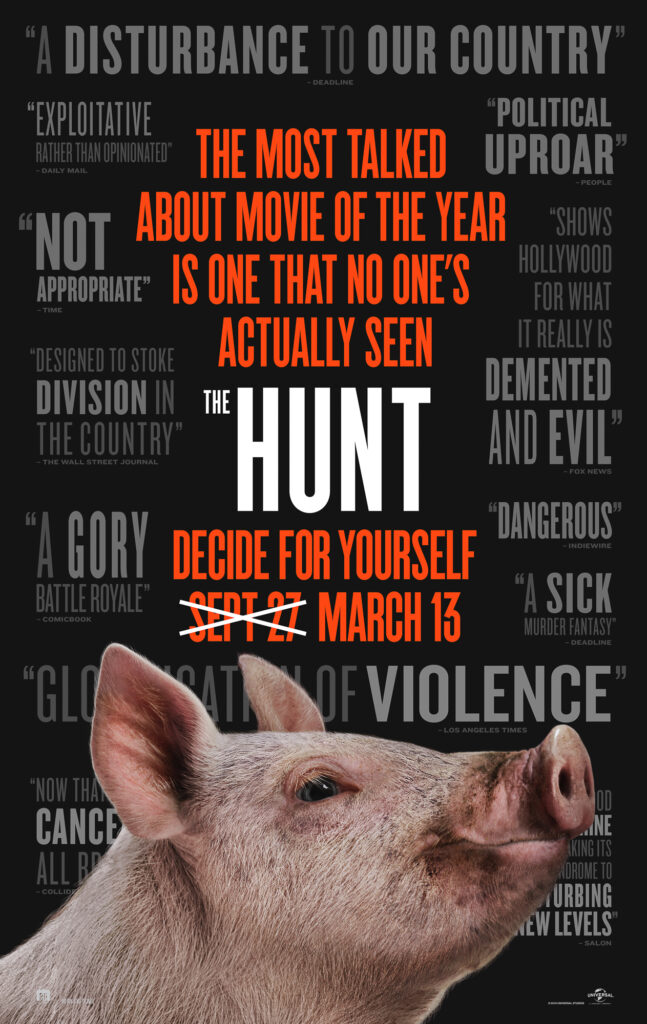 THE HUNT – A Review by Cynthia Flores

This new film is not for everyone. But if you like gore and great fighting scenes mixed with political commentary, then The Hunt is what you’re looking for.

The blood-soaked story starts in the shadow of a dark internet conspiracy theory. A group of wealthy liberal elites gathers at a remote manor house to hunt ordinary Americans for sport. Twelve strangers wake up in a clearing. They don’t know where they are or how they got there. They don’t realize they’ve been chosen for a particular purpose. They are at “The Manor” to be the prey for “The Hunt.”   But the elites’ master plan is about to be derailed because one of the hunted, Crystal (Betty Gilpin), knows the hunters’ game better than they do. She turns the tables on the killers, picking them off, one by one, as she makes her way toward the powerful and mysterious Athena (Hilary Swank) at the center of it all.

This film is brutal from the beginning to the end. It’s the conservatives fighting with the liberals only they are armed with lethal weapons and not just red caps and snappy slogans.  However, the slaughter is more in the tradition of gore rather than scary horror films. Think about the classic Evil Dead films vs. the Saw franchise, and you’ll understand where I am coming from. In fact, the lead in this film Crystal, played with kick-ass abandon by Betty Gilpin, reminded me of the character Ash Williams that Bruce Campbell made famous in the Evil Dead movies.  Both are die-hard fighters in silly, over the top action that’s a bloody mess. In The Hunt, you also get a bonus. It has toe-to-toe extended girl-fight scenes between Crystal and Athena that’s a hell of a lot of fun to watch.

The co-writers for The Hunt, Nick Cuse and Damon Lindelof, did not seem to pick sides in this storyline. They take out their pens and make scathing remarks against both the ultra-conservative right and the extreme liberal left. No one is spared the spotlight of their razor-sharp satire. Both writers are quoted as saying they got the idea for this story while searching the internet. “After the election, it felt like there was just a massive shift in conversation,” Lindelof says. “And we became very interested in conspiracy theories and the idea that these once-fringe ideas had really gone mainstream. This area of what is a conspiracy theory and what is fact started to get very, very confusing since there was some great storytelling happening in these conspiracies.”

I give The Hunt a 3.5-star rating. Because it’s a bloody satirical thriller that doesn’t take itself too seriously and has a satisfying ending.