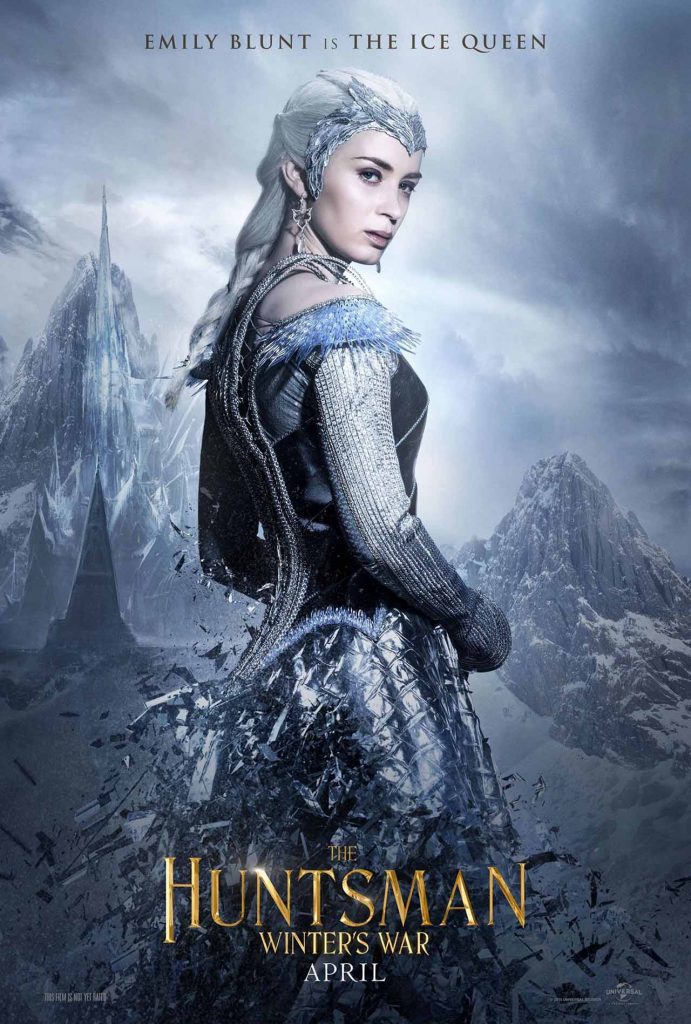 Snow White & The Huntsman was a 2012 that many avoided.  It starred Kristen Stewart and there is just not much there in terms of acting prowess.  But since the film made a ton of cash, a sequel seems like a great idea.  That sequel is The Huntsman Winter’s War.

This story opens with a reference to the last film but lets the audience know that it is not the only story.  We find that there is strife between Ravenna (Charlize Theron) and her younger sister Freya (Emily Blunt).  Ravenna has the magic mirror and also has some other magical powers.

Freya has not developed any magical powers and is a weaker individual. The younger sister loves another and a child is born.  A tragedy happens and Freya becomes bitter but her powers appear.  She commands ice elements. Her heart becomes cold and she moves to the kingdom north.

Since Freya cannot have her child, she decides to turn the children of her kingdom into an army.  One of the more talented warriors is Eric (Chris Hemsworth).  The man becomes a very skilled killer aka a Huntsman in the name of his queen.

Another warrior is Sara (Jessica Chastain) who is an archer of exceptional talent, a woman who never misses. The two lead troops into battle and bring back the crown of neighboring lands.  In the end, they unite the cold wastelands.  But in the only forbidden law of the land, the two warriors fall in love.

When Freya finds out about the indiscretion, the queen tricks the two into thinking something horrible has happened.  Eric is attacked and left for dead.  But, he survives being tossed into a river.

Seven years later, Eric leads a nomadic life. He still has his skills and eventually befriends a pair of Snow White’s dwarves.  They have to track down the magic mirror to a sanctuary.  Along the way Eric finds Sara, who is bitter about Eric leaving.   It seems that the queen Freya has deceived them both into seeing something that was far from the truth.  Neither one is what was shown in an ice vision.

Eventually, the foursome join together to find the magic mirror.  The film twists and turns until we get to the reemergence of Ravenna.  She is the manipulator of all events in both kingdoms and Freya is just another pawn in her grand scheme to get back at Snow White.

To begin with, Jessica Chastain delivers a fantastic role in a mediocre flick.  There is this fire in her acting that overshadows her co-stars.  Even when playing a woman with a cold heart, the shine of her personality comes through.  Everyone wants more of her in the film.

Chris Hemsworth has been playing Thor in half a dozen flicks.  During those films, he has grown from a chiseled face to a competent actor.  In this film, there are relaxed moments between the action bits where Chris shows that he can do more than swing a hammer.  There is a spark between the actor and his female co-stars.  But, he needs a stronger story to practice his acting.

The biggest problem is with the villains. Emily Blunt is supposed to be a weaker character but not a weak acting role.  The way she attacks the role is inconsistent and never really becomes a believable experience.   I think the actress is wonderful but just not in the role of Freya.  When Charlize takes center stage, we finally get to see a super bad villain.  The work needed more Ravenna and much less Freya.  Charlize steals every single scene she’s in and thunders in evil snarls.

Director Cedric Nicolas Troyan is not sure exactly what kind of a film needs to be told.  There are elements here and there that work but the overall work is not as strong single scenes.  Evan Spiliotopoulos and Craig Mazin are the writers and they never have a strong grip on the story.  They have tried to cobble together a story in a work that never needed a sequel.  The effort mostly fails.

By the third act, The Huntsman Winter’s War felt like a very dark version of Frozen.  The film goes overboard in special effects, proving that director Cedric Nicolas Troyan knows how to spend a ton of money.