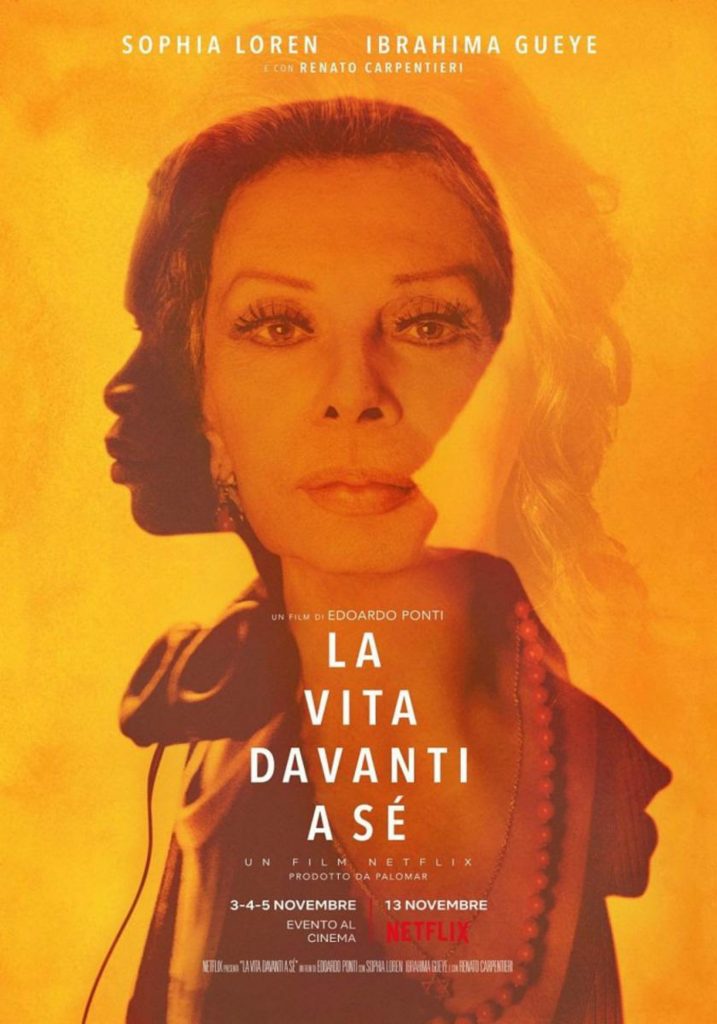 THE LIFE AHEAD – A Review by Cynthia Flores

Ring the bells and shout it from the mountain tops all you cinephiles, “Sofia Loren has ended her acting hiatus!” The new Italian film The Life Ahead will probably be Netflix’s Oscar contender for Best Foreign Film. Besides a Best Actress nomination for the Italian acting icon for Madame Rosa, we may well see a Best Actor nomination for the feature film debut of fourteen-year-old Ibrahima Gueye as the street kid named Momo. The grittiness of his performance reminded me of a young Jodi Foster in the 1976 film Taxi Driver. Big, bold, and fragile all at once.

The Life Ahead tells the hard-luck story of a twelve-year-old streetwise Senegalese orphan named Momo. He’s smart and consigned to not being given much in life. As he puts it in his world-weary young voice, “I am not going to bust my ass for happiness. If it shows up, great. If not, who gives a shit?” The film follows him around the colorful Italian port city of Bari. Momo has ambitions to make his way up the ladder in the underworld of the town’s shaft alleyways. He outsells the other kids peddling drugs for Ruspa (Massimiliano Rossi) with stealing on the side. One day, he steals a bag of items from the elderly Madame Rosa on the street. She is a holocaust survivor who makes a meager living raising the children of prostitutes. A profession she shared with them until she got too old. When Momo is forced by his foster father, Dr. Coen (Renato Carpentieri), to apologize to Rosa, she reluctantly agrees to temporarily take him. The two loners are kindred souls, both treated harshly by fate. It takes time, but slowly, they make an unlikely family. They become each other’s protectors, helping each other face the world, and dementia through their deep and unconventional bond.

The Life Ahead is a drama deeply grounded in the reality of marginalized people. It only delves into a fantasy of sorts when Momos’ lioness materializes in his dreams. It’s the manifestation of his need for protection, affection, and love – something he wouldn’t even admit to himself that he craved.

The Life Ahead is directed and co-written by Loren’s son Edoardo Ponti. He comes from filmmaking royalty. His father was director Carlo Ponti of Doctor Zhivago and La Strada fame. On a side note, Edoardo also directed the last feature film his mother starred in, which was 2014’s Human Voice. So, it is only fitting that he bring his mother back to us in this heartbreaking film with a killer soundtrack.

I give The Life Ahead a 5-star rating. Bring your tissues for this one. I hope it will be the first of many more films from the eighty-six-year-old Italian diva. She is still outstanding on the big screen.