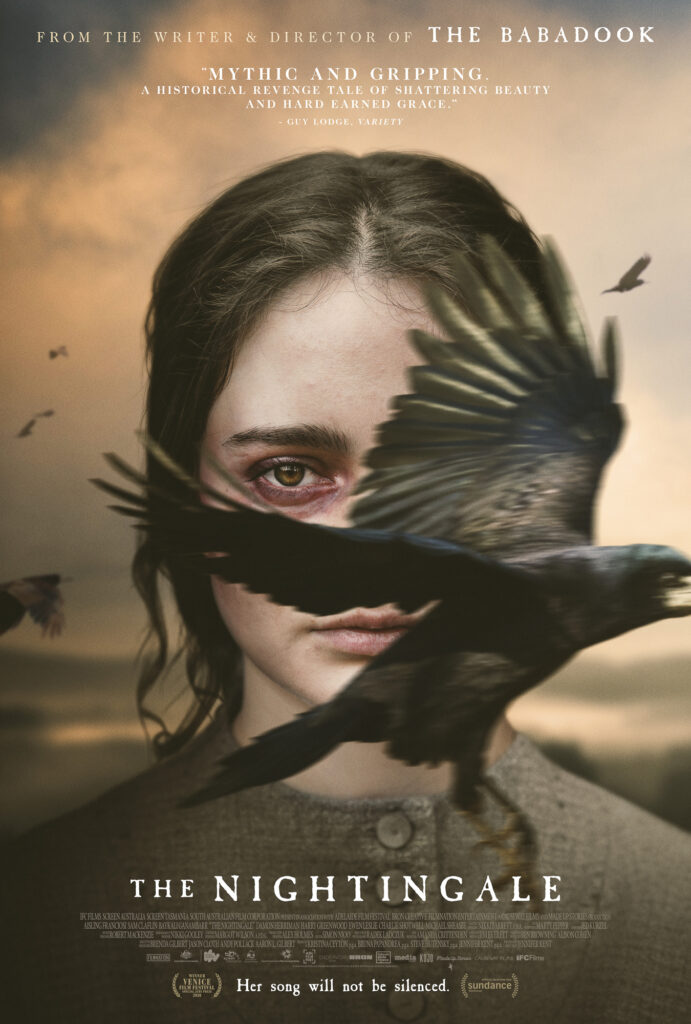 THE NIGHTINGALE – A Review by Cynthia Flores

This new film from writer/director Jennifer Kent is a revelation.  The Nightingale is a haunting tale of the consequences of violence and the actual price of vengeance.  However righteous the cause, there is always a price to pay for blood being spilled.

The film is set during the English colonization of Australia in 1825.  It is a wild and untamed land that surrounds the colonizers.  The story follows a 21-year-old Irish convict named Clare (Aisling Franciosi).  Having served her 7-year sentence, she wants to be free of her abusive master, Lieutenant Hawkins (Sam Claflin).  He refuses to give the papers that will release her from his charge.  He is a dangerous man who has fallen for the charms of the lovely, married Clare, least of which is her gift of song.

When we first see Clare, she takes her baby daughter to work with her in the masters’ kitchen.  A guest military officer is visiting the post.  So Clare is dressed up and presented before the men to sing British folk songs for them.  She sings because she is powerless to refuse.  After the gathering, in private, Clare asks Lieutenant Hawkins for her earned release papers.  He ignores her request and tries to buy her favors with gifts he has brought for her instead.  When she resists, the lieutenant takes what he wants, telling her that she is his property and he can do what he wants with her.  This will not be the last time we see the debased nature of Lieutenant Hawkins.

Later when Clare’s husband Aidan (Michael Sheasby) reacts to Hawkins’ taunting, she becomes the victim of a barbaric crime at the hands of the lieutenant and his cronies.  Her family is decimated, and she seeks justice.  However, when the British authorities fail to deliver that justice, Clare settles on revenge instead.  She decides to pursue Hawkins, who left his post suddenly to try and secure a captaincy up north.  He has four days to make it through the wilderness to the town up north to personally request the position that was promised to him.  Clare is unable to find friends to go with her on her journey.  She cannot go after them alone and is forced to enlist the help of a young Aboriginal tracker named Billy (BAYKALI GANAMBARR).  He grudgingly takes the job and leads her through the rugged wilderness of Tasmania to track down Hawkins, unaware of her true intentions to kill them all.  The terrain and the current hostilities are frightening. There is fighting between the indigenous people of the land and its colonizers.  It is playing out all around them in what is known as ‘The Black War’ of Australia.

Clare and Billy are mean and untrusting toward each other from the beginning; both suffer their own traumas and mutual hatred for the white boss man.  But as their trek leads them deeper into the wilderness, they learn to find empathy for one another while dealing with the madness and cost of revenge.  The evolution of their friendship is at the heart of this film.  It’s through their kinship of grief that the cost of colonization is painted.

I believe that The Nightingale will be a contender for awards this season.  This is not just a simple rape-revenge film, it is so much more than that.  It’s a beautifully shot and excellently acted epic tale of systemic racism, misogyny, and violence.   It shows as the writer/director Jennifer Kent is quoted as saying, “disrespect for the feminine and the inciting power of female rage. It is also a film about love in a very desperate time.  And we live in desperate times.”

The Nightingale is a must-see film that you will remember way after the credits have rolled.  I give this film an A+ rating.  Don’t miss it.