Author J.R. Moehringer’s memoir has impacted many folks since its publication in 2005.  Does Director George Clooney and a quality cast of talent capture Moehringer’s reality?  Here is my answer to that question.

The Tender Bar tells the story of J.R. (Sheridan), a fatherless boy growing up in the glow of a bar where the bartender, his Uncle Charlie (Affleck), is the sharpest and most colorful of an assortment of quirky and demonstrative father figures. As the boy’s determined mother (Rabe) struggles to provide her son with opportunities denied to her — and leave the dilapidated home of her outrageous if begrudgingly supportive father (Christopher Lloyd) — J.R. begins to gamely, if not always gracefully, pursue his romantic and professional dreams — with one foot persistently placed in Uncle Charlie’s bar. The Tender Bar is based on the best-selling memoir of the same name by J.R. Moehringer.

The Tender Bar is a film that has the ability to really hit you in the gut.  A wake-up call to anyone needing a push to get life started no matter your circumstance.  J.R.’s world has always had hurdles and obstacles to overcome just to be a regular kid.  His absent father truly impacted J.R. and his mother’s world that they had to rely on her family for all support.  In the hands of Academy Award winning Director George Clooney and Academy Award winning Writer William Monahan have cultivated an emotional and entertaining adaptation of Moehringer’s memoir.

The cast seems perfectly selected.  Ben Affleck’s performance is one of his best ever and his endearing role as bartender Uncle Charlie is one of the most charming characters on screen this year.  Affleck’s ability to connect with the young version of JR (Daniel Rainieri) and young adult version (Tye Sheridan) showcases how impactful Charlie was to the real JR’s life.  Uncle Charlie’s advice, quick wit and lazy nature make him a really enticing figure in any moment of the film.  Lily Rabe is both comfortable as the grief-stricken single parent and still as compelling as the cancer survivor who is always the heart in JR’s life.  Christopher Lloyd’s humorous ornery grandfather steals every scene he glides into including one of the best farting sequences since Blazing Saddles’ infamous campfire scene.  Briana Middleton unreachable love interest is truly captivating, and JR’s best friend Wesley is played wonderfully by Rhenzy Feliz.  Add in Uncle Charlie’s bar fly friends and you have a really fleshed out group of figures to follow.  The film though is all about the amazing performances by Tye Sheridan and young Daniel Rainieri as J.R.  Daniel captures the adorable innocence while Tye really has become an actor who has IT.  There even is a special sequence in the film where the two JR’s share an incredible scene. The cast really understood and delivered in bringing Moehringer’s life to the big screen.  Don’t miss out on the cameo performance by Billy Meleady as an Irish Catholic Priest JR runs to on the train.

Monahan’s script really keeps the pacing at a nice important moment to moment feel that doesn’t lag in any sequence.  Clooney’s ability to straddle the dramatic film line with touches of humor and heartbreaking moments of failure really brings to life Moehringer’s honest memoir.  The uplifting nature of the young man finding out he has to go out and do it rather than wait is really powerful.  The film reminds me of a funnier The Graduate and shares a lot with Stephen Chbosky’s The Perks of Being a Wallflower.

To say I was moved while watching this film is an understatement.  It hit me in the gut and flooded my body with all the amazing feels needed to fall in love with a movie.

Written by:  William Monahan from memoir by J.R. Moehringer

Release: Out now in theaters and on Amazon Prime January 7th. 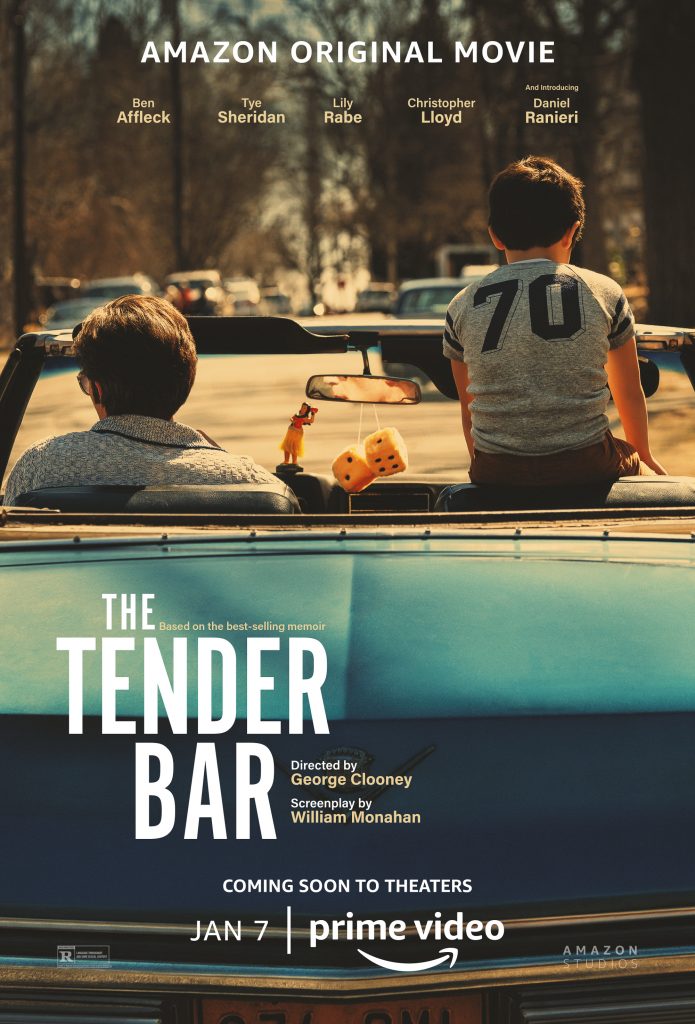 Written By
Gadi Elkon
More from Gadi Elkon
https://www.youtube.com/watch?v=WrF55yjCAJQ Tonight and tomorrow night are the final two shows of ALL...
Read More