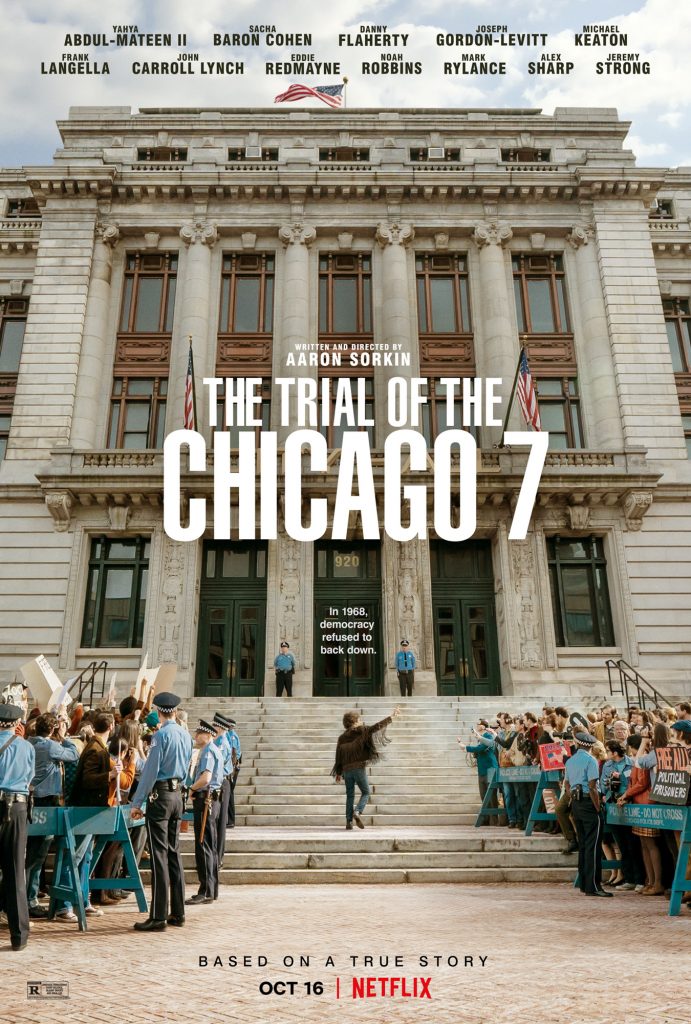 THE TRIAL OF THE CHICAGO 7 – A Review by Hollywood Hernandez

The Trial of The Chicago 7 is a look back at a shameful episode in American history that is currently showing on Netflix. I don’t think it’s coincidental the Netflix and writer/director Aaron Sorkin, who wrote the screenplays for Molly’s Game, The Social Network, and A Few Good Men, would release the movie at such a historic time in presidential politics. The film shows how little progress has been made and the corruption that still exists with corrupt politicians since the ’68 Democratic convention until today.

The movie shows the turbulent times of the ’60s and the public’s opposition to the Vietnam war. The Chicago 7 consists of leaders of several different militant groups including Tom Hayden, who was later elected to the California Senate played by Eddie Redmayne, Abbie Hoffman, portrayed by Sacha Baron Cohen, and Black Panther leader Bobby Seale, Yahya Abdul-Mateen II. Their prosecution was a plot of newly elected President Nixon to show protesters what would happen to people who would oppose the war.

The trail itself was an absolute scam of criminal justice with a judge, played by Frank Langella who was teetering between being corrupt and being senile. Joseph Gordon-Levitt plays the federal prosecutor who follows his marching orders from the U.S. Attorney General but it’s obvious that he sees the unfair trial going down in front of his eyes.

The Trial of The Chicago 7 is a good reminder of how a corrupt government can affect the lives of its citizens. I highly recommend you find the time to watch it.

The movie is rated R with a run time of 2 hours and 9 minutes. On my “Hollywood Popcorn Scale” I rate The Trial of The Chicago 7 a JUMBO.