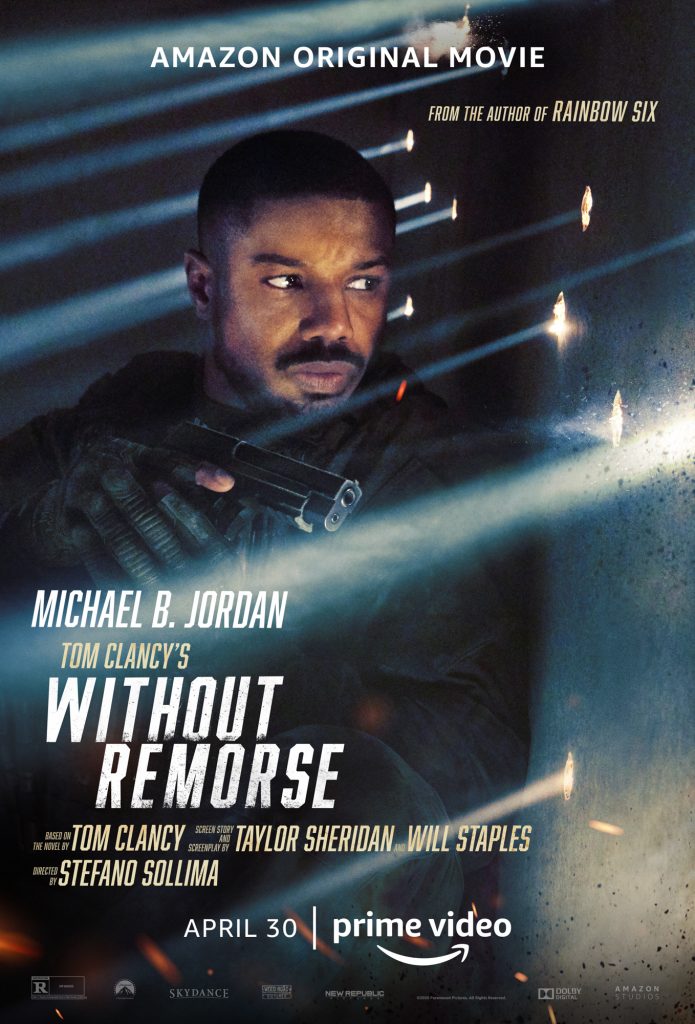 Tom Clancy’s WITHOUT REMORSE – A Review by Hollywood Hernandez

Michael B. Jordan stars as a Navy seal who comes home after a covert operation for the US in Syria. However, he soon discovers that Russia was really behind the conspiracy. He makes that discovery after Russian agents break into his home with plans to assassinate him for his role in the mission. The Russians end up murdering his pregnant wife Pam, played by Lauren London (who was the wife in real life of slain rapper Nipsey Hustle) and he survives the attempt on his life.

The Navy Seal uses all of his Navy training to locate the foreign spies and to find out who was behind the secret mission and get revenge on everyone involved for the murder of his wife and unborn child. He enlists the help of two people he thinks he can trust, his Navy commander, Commander Green, who’s played by Jodie Turner-Smith, and C.I.A. Agent Robert Ritter played by Jamie Bell.

The entire story of Without Remorse is pretty much all summed up in the movie’s trailer. There’s a lot wrong with this movie. While it seemed like a promising premise the movie just did not deliver. First, for me, there were some major issues with the film’s dialog. There was a lot of mumbling in the movie by the on-screen actors. I feel like I missed a lot because I simply could not hear what the actors were saying. The movie is also very dark. I don’t mean the tone of the movie; I mean the way the actual scenes were shot with very little light. I couldn’t see what was happening.

What was plenty loud was all of the gunfire in the movie. Automatic weapons were blazing and explosives were going off non-stop. Most of the movie’s 90 minutes were just filled with a loud racket on screen. I haven’t read the novel, so I don’t know if the limited dialog was Clancy’s doing or the fault of the screenwriter, but I just wasn’t satisfied with the written words on the page, or perhaps I should say the lack of written words.

Although most likely Clancy will write another novel that will become a big action movie, they’ll have to do better making it into a film. The movie is rated R with a run time of 109 minutes and on my “Hollywood Popcorn Scale” I rate Tom Clancy’s Without Remorse a MEDIUM.