Avant-garde filmmakers Benny and Josh Safdie spent years trying to convince Adam Sandler to take the role of Howard Ratner.  Adam finally said yes and the choice may earn the comedic actor his first taste of legit awards aka an Oscar.  So is the film worthy your time and money?  Here is my full review of UnCut Gems by the Safdie Brothers.

From acclaimed filmmakers Josh and Benny Safdie comes an electrifying crime thriller about Howard Ratner (Adam Sandler), a charismatic New York City jeweler always on the lookout for the next big score. When he makes a series of high-stakes bets that could lead to the windfall of a lifetime, Howard must perform a precarious high-wire act, balancing business, family, and encroaching adversaries on all sides, in his relentless pursuit of the ultimate win.

Actors/Actresses like Jack Lemmon, Robin Williams, Whoopi Goldberg, Jim Carrey, Bill Murray, Richard Pryor, Lily Tomlin, Jamie Foxx and many others have taking the leap from comedy to dramatic roles on film.  Adam Sandler has done this himself.  UNCUT GEMS is not unique in its choice of Sandler playing the over-the-top jeweler Howard Ratner.  And like many of those other standup comedians turned dramatic leads Adam’s performance is garnering a lot of buzz as an award winning portrayal.  The nonstop pacing of the film perfectly matches Sandler’s own rapid fire deliver as the lead actor.  Sandler gives us a wide range of emotion that easily brings chills as the action intensifies throughout the movie.  Intense is the perfect one word to explain what this film is all about.  The action never lets up and the stakes continue to rise and rise until a truly explosive violent close.  Sandler never flinches and turns Howard Ratner into a potential Oscar winning character.  The film is worth seeing simply to watch Sandler explore his world for 2 hours and 15 minutes.  Whether he’s sucking up to Kevin Garnett and Lakeith Stanfield’s characters, trying to smooth talk his wife and his girlfriend, trying to assuage his Brother-in-law (plus gangster entourage), or comforting his sweet father (Judd Hirsh) Sandler never wavers in his perfect performance.

If their is a second nod to greatness, outside the praise the Safdie Bros deserve, its for Academy Award nominated cinematographer Darius Khondji.  The Iranian DP has dived into the dark realms of David Fincher (Seven & Panic Room) and Michael Haneke’s diabolical Funny Games, shot Danny Boyle’s underrated gem The Beach, found quality with Woody Allen’s Midnight In Paris, captured the expansive beauty of James Gray’s The Immigrant & The Lost City of Z and gave us the dreamlike state of Boon Joon Ho’s lovable Okja.  With the high pace of Safdie Brothers Darius creates pure adrenaline on screen by showing the reality of a New York minute in UnCut Gems.  Along with some well placed editing chops by Ronald Bronstein (co-writer as well) Darius Khondji once again has captured the light of one of 2019’s best films.  It would not shock to see Darius, like Sandler, get love from the Academy, Globes and all other award givers.

This high speed tale is easily one of my Top 3 films (post coming soon) of 2019.  The performances are incredibly legit, the cinematic visual landscape is spine tingling and the full arch of the story is breathtakingly impactful.  I had to remember to breath during parts of this film because I was so immersed in what was happening before my eyes and in my ears.  Bravo A24 you have another diamond of a film.

Written by: Ronald Bronstein and Safdie Brothers (Benny and Josh) 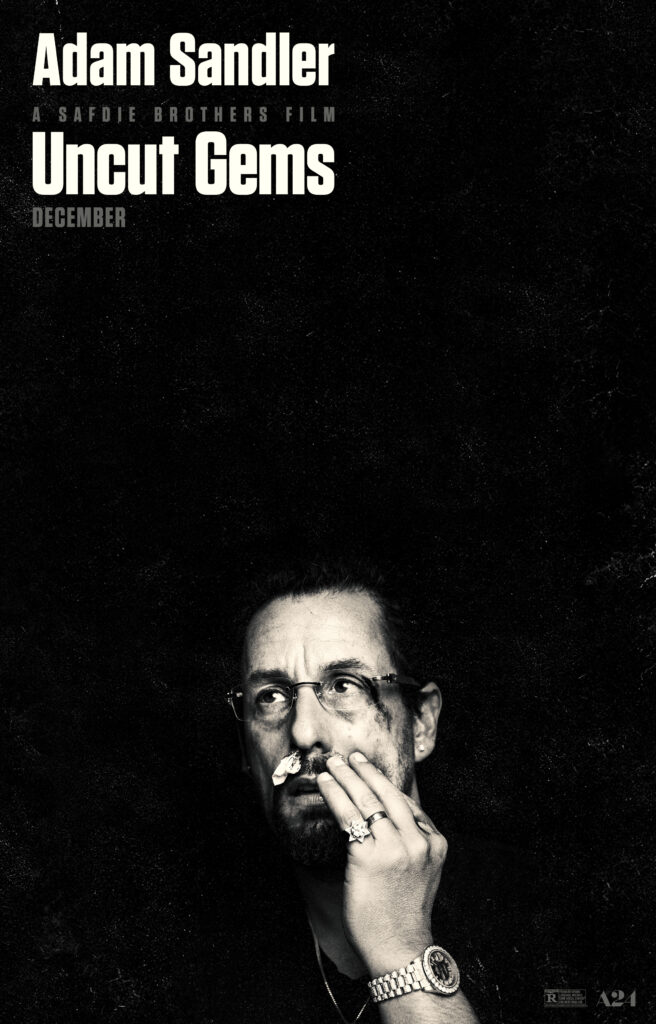 Written By
Gadi Elkon
More from Gadi Elkon
Some Freaks Trailer by TVMovieTrailer Click through for our interviews with a...
Read More