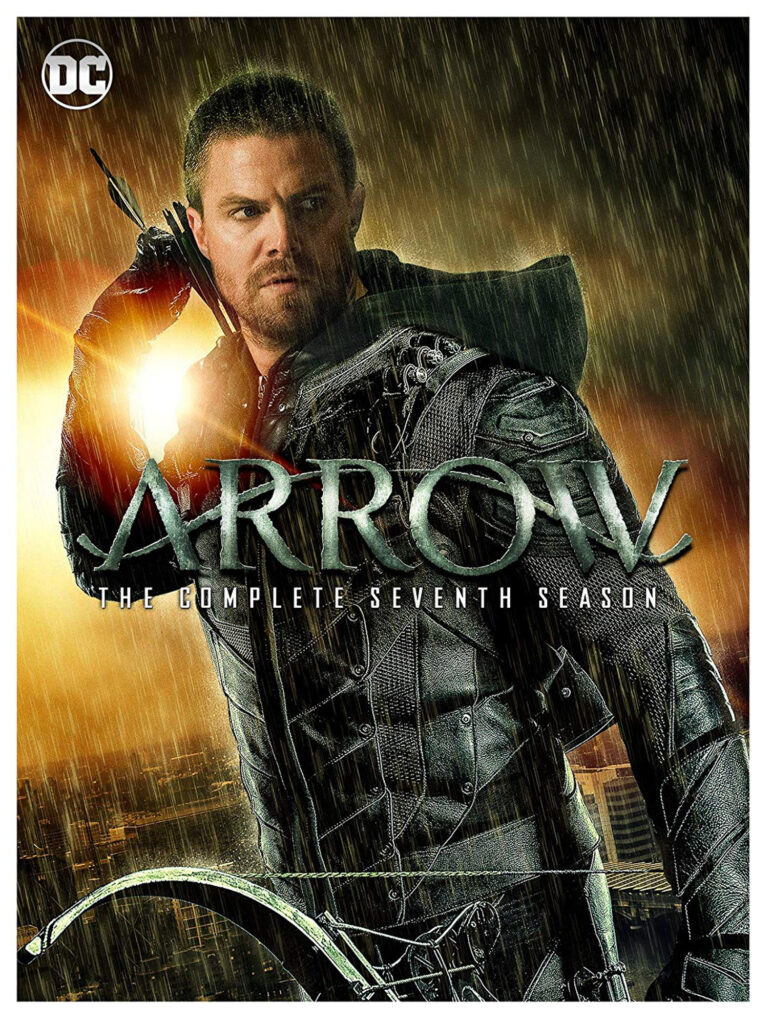 When Arrow first arrived on the TV scene it was like no other comic-related show I had ever seen.  Here was a guy the was dark and troubled and was more anti-hero than hero.  Oliver Queen (Stephen Amell) was born to wealth and power like Bruce Wayne but his life went WAY off track when the family yacht, the Queen’s Gambit, blew up in a remote area.  Killing all but Oliver, his father, and one crewman the trio were all alone in a life raft to try to survive.

Robert Queen (Jamey Sheridan), Oliver’s father, set the initial tone of the series when he shot the crewman and then himself in order to give his son the best possible chance of surviving.  Oliver began as a lone vigilante but his charisma soon begins to draw others into work with him in his fight to bring justice to Starling City/Star City.

Now, in the seventh season of the CW’s hit show, Oliver has agreed to go to prison to protect his family and friends, Team Arrow.  Within the walls of Iron Heights, he joins hundreds of inmates that he and Team Arrow put there.  No danger there, huh?

Meanwhile, the rest of Team Arrow must get on with their lives.  Felicity Smoak (Emily Bett Rickards) is distinctly upset with Oliver for the deal he worked out but that doesn’t stop her from doing what must be done.

This season has some new players coming in.  Some are good guys, some are… not.  And as always, good and bad are simply our current perceptions, things are not always (okay, rarely) what they seem.  We also have a character returning to the fold to add their personality to the chemistry of the show.

Season seven also has a dual timeline going that may confuse you if you don’t stay attentive.  Both timelines are riveting and we are shown the connective tissue between the two as each progresses throughout the season.

Favorite part of the season?  It has to be the “Elseworlds” crossovers between Arrow, Flash, and Supergirl.  I love these yearly melding of the shows.  This year’s crossover features not only an excellent bad-a$$ character from the comic series but we see some great “badies” from their pasts!  The Monitor/Mar Novu (LaMonica Garrett) is an element of the DC Universe that challenges everyone to do their utmost, to be their best, to meet his challenge.

And this Elseworlds crossover is the kick-off of a new DC show coming this fall, Batwoman (aka Kate Kane, Bruce Wayne’s cousin, portrayed by Ruby Rose), showing us yet another character of the DC Universe to open our eyes to the Multiverse.  Her interaction during the Elseworlds crossover gives me a good feeling that I will enjoy this show!  I really like her attitude!

The extras for this season surprised me with a strong array of features.  On each disk (in the Blu-ray edition only) you’ll see the deleted scenes for the episodes displayed on that disk.  I like this idea of placing the deleted scenes on the disks to keep them close to the episodes instead of lumping them all in a separate group.  The expected gag reel resides on Disk 4 is nothing special but fun nonetheless.

There are three longer features that are placed one per disk on the first three disks.  Disk 1 has “The Best of DC TV’s Comic-Con Panel San Diego 2018”, a look at the DC panels from ALL of the DC Universe shows, not just those on the CW network.  If you want a sneak peek at the upcoming season’s for all of the shows, this is the one you want to watch!

The next disk has “Inside the Crossover: Elseworlds” where the showrunners from all of the affected shows discuss how they come up with the ideas for these crossovers and the fun of making them!  After watching this I had to go back and re-watch the crossover episodes (they are ALL on the Blu-ray edition) and watch more closely for all of the great Easter eggs!  Plus, they cut to clips where we see the connections between the comics and the shows which are awesome.  This is a great treat for all fans (like us)!

Disk 3 gives us the darkest of the longer featurettes, “Villains: Modes of Persuasion”.  The villains are discussed in detail by each DC Universe show’s Executive Producer.  They even cut to a Licensed Clinical Psychologist who discusses motivations!

Of the three, I am having a problem deciding which is best.  I have to say that all three are worth watching.  In fact, for possibly the first time ever, I can’t point to one and say this one or that one is better than the others.  The three were not the type of extras I was expecting but they are great!

A couple of notes for those of you who are used to films and TV series from other studios, the extras ONLY exist on the disks.  The digital version does not include the extras.  The Blu-ray edition includes all three Elseworlds episodes but the DVD edition does not.  I did not receive the DVD edition so I can’t talk about it except for the information I list below.