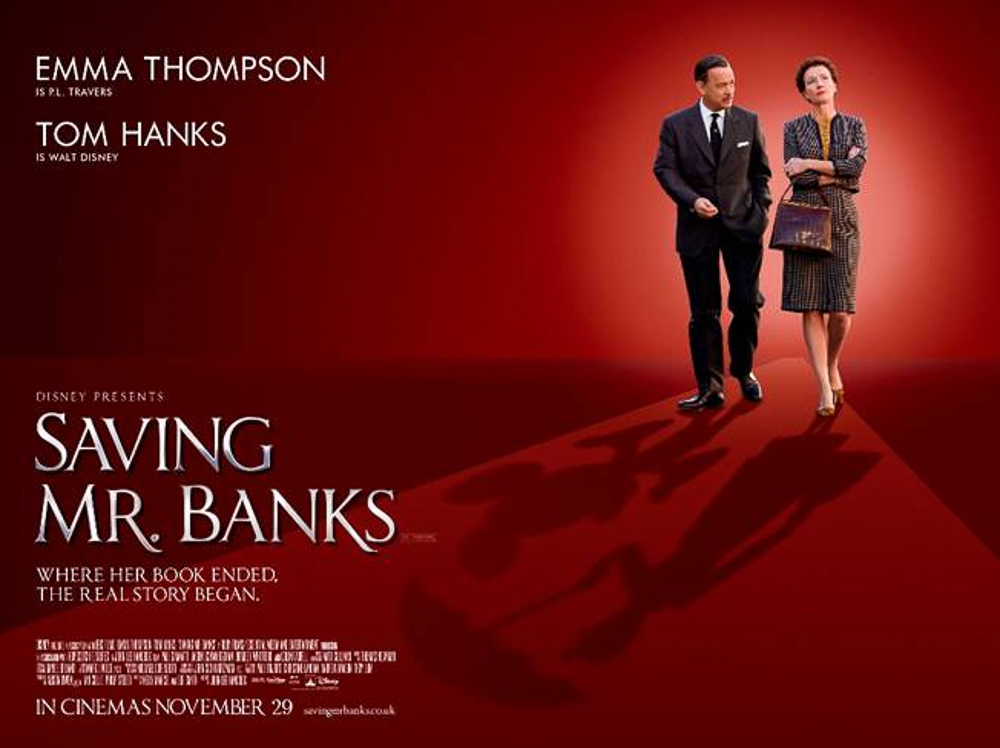 MPAA Rating: PG-13 (for thematic elements including some unsettling images)

Saving Mr. Banks tells the story of the trials and tribulations that Disney Studios and Walt Disney experienced in convincing the writer of the Mary Poppins novels, P.L. Travers, to allow them permission to make a live action film based on those novels.  Their task was made more difficult than it had to be due her desire to prevent it.  Walt Disney spent 20 years working to bring this film to the big screen.  The only reason Mrs. Travers finally relented was that she was for all intents and purposes broke and about to lose the London home she loved.

Giving in to her literary agent’s pleas and Walt Disney’s invitations, Mrs. Travers, uprooted her very settled, very ordered life and flew from London to Los Angeles making friends along the way (OK, NOT making any friends along the way).  Arriving in LA, she dislikes everything from the smell of the air to the driver assigned to her.  Ralph (Paul Giamatti), is a ray of sunshine in a film filled with the sunny dispositions of the Disney employees.  His attitude made him my favorite character in the film in less than a minute, a decision confirmed over and over as the story progressed.

Arriving on the lot, Mrs. Travers vetoed one concept after another as they labored on the script.  My favorite was her veto of using Dick Van Dyke followed by her horror when she discovered they planned to use animated penguins.  Her insistence upon a tape recorder to record the proceedings of every single work session concerning the film was inspired.  And all of these years later they had an amazing font of information when they decided to tell this story (stay through the credits to hear some of the recordings)!

Slowly, the Disney team warms the heart of this much damaged lady.  Her damage you ask?  Her damage was the basis for her stories.  Growing up in Australia, the daughter to an alcoholic bank manager father, her life was rough and included loosing that father at an early age.  We see glimpses of that life as the she works with the team of writers dedicated to the Mary Poppins screenplay.

Frankly, when I first heard about Saving Mr. Banks, I was worried.  Were we going to see a soft sell or a true story?  I am very happy to say that this film is worth watching.  There are heart-wrenching moments as Mrs. Travers recalls her early life.  Offsetting this pain are moments of humor as we watch the lady’s determination not to enjoy herself slowly erode as she is immersed in “Disney”.  She never completely gives in but the picture was made and became a great hit that warmed the hearts of millions.

FULL PRICE – Excellent movie, well worth the price
MATINEE – Good movie
DOLLAR – OK movie
CABLE – No need to rush. Save it for a rainy day.
FREEBIE – Good that I saw it on the big screen but wish I hadn't paid for it.
COMMERCIAL TV – Commercials and cutting to the allotted time will not hurt this one.
FORGET IT! – Bad. If you see this one, do yourself a favor and keep it to yourself.
GET YOUR TORCHES – BAD! – Burn the script, the writer, the director and maybe even the actors!