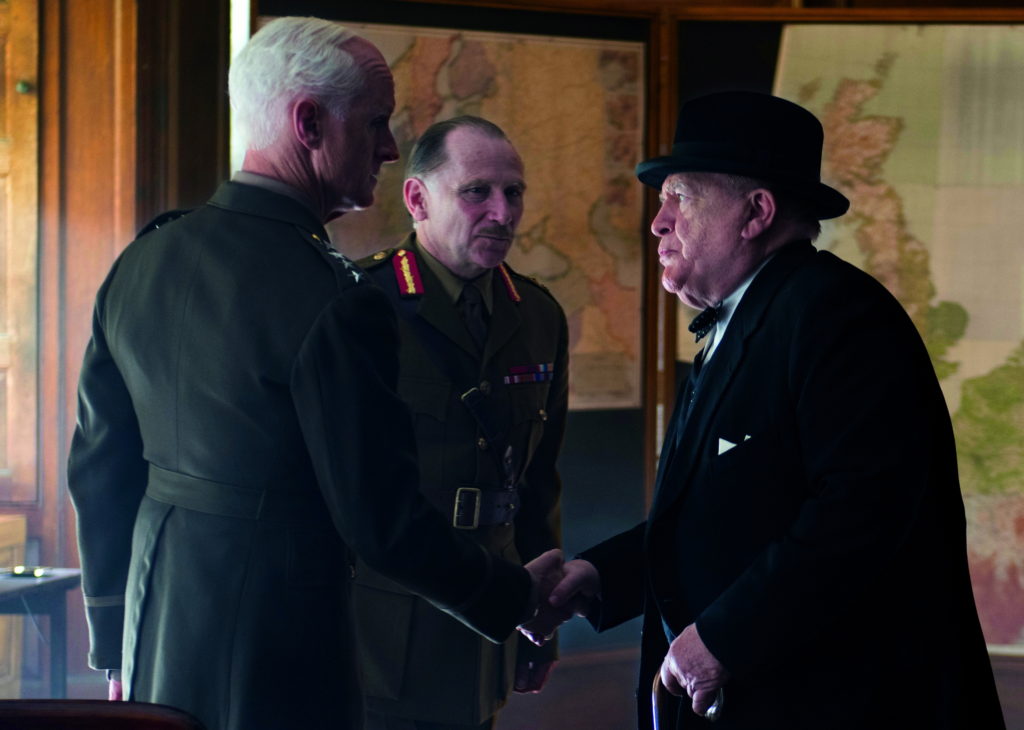 CHURCHILL – A Review by Cynthia Flores
There have been great documentaries and films about Winston Churchill. What I like about this new film Churchill is that it doesn’t try to be a biopic of the man's entire life, instead, it looks at him a few days before D-Day Normandy landings through to the historic speech he gave to his countrymen right afterwards over the BBC radio broadcast.  Prime Minister Winston Churchill (Brian Cox)  is exhausted by years of war, and is  wrestling with his doubts and fears about the operation being carried off as planned. It’s being led by Dwight D Eisenhower (John Slattery) from the US  and British field marshal Bernard Montgomery (Julian Wadham). However, because of the style of beach invasion they were planning for D-Day Churchill was not on board. He had done something like it during  the Battle of Gallipoli 30 years before in world war 1, and that campaign had failed miserably leaving  thousands upon thousands of men dead on the beach.  Churchill felt he had their blood on his hands and did not want a repeat of that kind of defeat again. There is an opening scene on the beach where he is walking along the sand and remembering the cries of the wounded at Gallipoli, and the dead bodies strewn about him turning the sea red with their blood. This opening scene sets the tone for the whole movie.  War is not glorified it is endured. Churchill argues with his right hand man 1st Viscount Alan Brooke (Danny Webb) that has fought along Winston on the battlefields of WWI and now fights the political battles with him. Alan and Clementine Churchill (Miranda Richardson) support Winston through his drunken rants and tantrums he throws as his concerns about the invasion are ignored by the other generals.  The actor Brian Cox breaths life into this giant of history and makes him human. He breaks your heart as you see this lion of a great man due to age, conceding the charge into battle to the younger men at hand.
I also liked that this film shows how hard it was on Clementine to be married to such an important man. How lonely and frustrating it could all be at times.  Winston Churchill was a complicated man that was beloved by a grateful nation for seeing them through World War 2. There is a quiet scene in the film where King George VI (James Purefoy) honestly and eloquently let's Winston know that he is too important to lose on the battlefield. That Country and the King would suffer greatly for his loss, so he must instead let the younger men go into battle and he must stay and lead the nation instead.
I loved the contemplative style of this film. Churchill is beautifully shot by David Higgs. The images were respectful to the ravages of war and the story put a spotlight on the burden that the people that have to make the decisions in the war rooms have to live with.
Directed by: Jonathan Teplitzky
Written By: Alex Von Tunselmann
MPAA Rating:  PG
Selig Rating: B+
Running Time: 1hr 38min
Drama,  Biography
Wide Release
Starring:  Brian Cox, Miranda Richardson, John Slattery, James Purefoy, Julian Wadham, Danny Webb, Richard Durden, Ella Purnell
Tags from the story
Brian Cox, Churchill, Cohen Media Group, James Purefoy, John Slattery, Jonathan Teplitzky, Julian Wadham, Miranda Richardson
Facebook Twitter Pinterest
LinkedIn Email