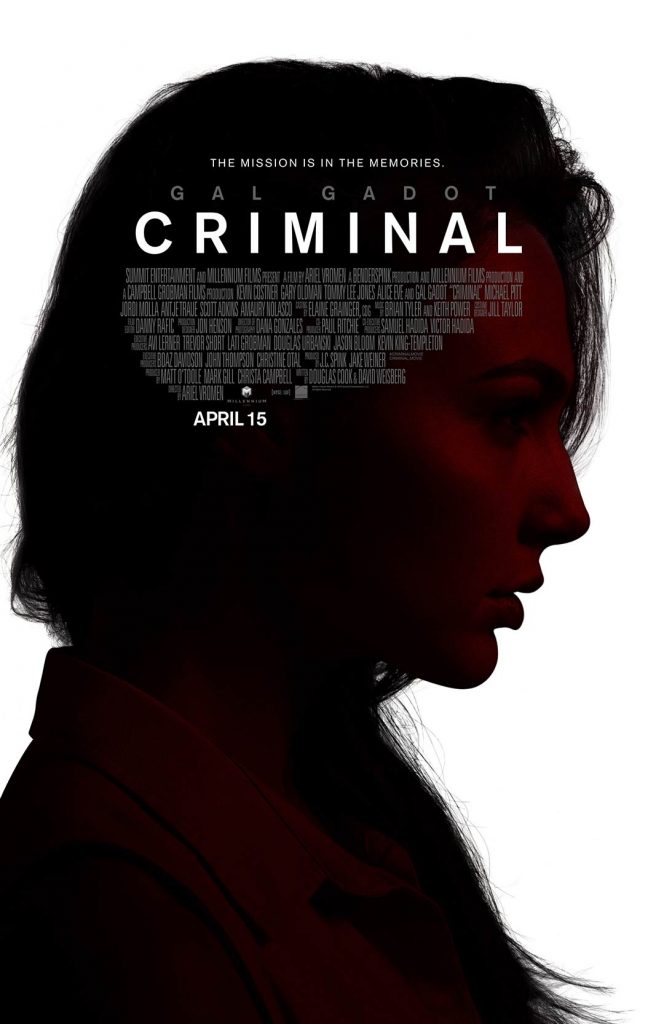 Back in the days of The Cold War, there were many different avenues for screenwriters to explore.  The overall tension between the two super powers and the cloak and dagger hi-jinks that took place behind both shores bred a multitude of stories.  But, since those days, there has been a dramatic lessening of those types of stories.  Criminal tries to resurrect those heydays.

The story starts with a man Bill Pope (unaccredited Ryan Reynolds) trying to outrun two different groups in London as he carries a large canvas case that is full of money and passports.  One group is the government and the other is an independent.  Through trickery, the other group gets a hold of Pope and tortures him to death.  The government gets there just a bit too late.

Then we go to a Dr. Franks (Tommy Lee Jones) who has an untested idea that one can transplant the identity of one into another.   He uses a criminal Jericho Stewart (Kevin Costner) to implant Pope’s memories.  Jericho had a brain injury where part of the cranium never developed.  The man does not distinguish between right and wrong and is chained like one imagines that Charles Manson is kept behind bars.

It seems that the operation did not work but the audience knows that it did.  Jericho gets visions of another life.  These visions become pieces of a puzzle that leads Jericho to Pope’s wife Jill (Gal Gadot).  Jericho keeps seeing something about a George Orwell book where the money is stashed.  He wants the money so he can escape.

On the other side of the plot, Quaker Wells (Gary Oldman) is the head of the agency and needs the information in Pope’s conscious.  There is a hacker known only as ‘The Dutchman’ who has a computer program that can control all of any government’s defenses.  In the wrong hands, it could destroy the world.

The other group wants the Dutchman in order to take over the world.  In what feels like a leftover from the 1980s Bond franchise; the bad guys want global domination.  It is the cat and mouse chase that drives much of the plot.

This is a thriller version of the Frankenstein story, right down to the name of the doctor Franks.  We get the criminal brain that eventually learns some humanity but is still bad to the bone.  Writers Douglas Cook and David Weisberg mine The Modern Prometheus and place it right into the idea of a modern Cold War thrill ride, just not an E ticket ride.  But much like the Frankenstein monster, it feels like a stitched together body that was once dead.

Kevin Costner starts with an interesting character, full of bile and revenge.  But as the other mind takes over, he becomes a super spy, super killer.  There is little remorse within the confines of the character and the screenplay.  It is interesting to see Kevin Costner at the beginning but by the end, he’s just another action killer.

Both Tommy Lee Jones and Gary Oldman are showing signs of age and not in a good way.  There are Grand Canyon style creases in their faces.  Director Ariel Vromen does not show them in a good light.

Gal Gadot was beautiful and kick-butt in Batman V Superman, the true highlight of the flick.  Here she just comes across as an okay actress with a beautiful smile.  She is given little to do other than be tied up on a bed and walking around on a beach.

The ending also is just wrong.  Without giving away anything, the film feels like it was tested and the audience wanted a different finish that was more positive.  It is a total violation of what happened in the time before the close.  It becomes weak and ruins the experience.

Director Ariel Vromen is not sure exactly what kind of a film he wants to make.  The film starts out great with Ryan Reynolds going around stunning parts of London.  The chase feels real and the ending of the character is a shock.  Then we get the introduction of Kevin Costner, again an interesting and different moment.  When Vromen finally plunges into the meat of the story, he loses the audience in the redundancy of half a dozen other better told tales.

Criminal is a thriller set in the world of high stakes espionage but it is just not a very good film.  There are moments here and there that work but it is truly not worth the money for a night at the cinema.  Too much of the film does not work.