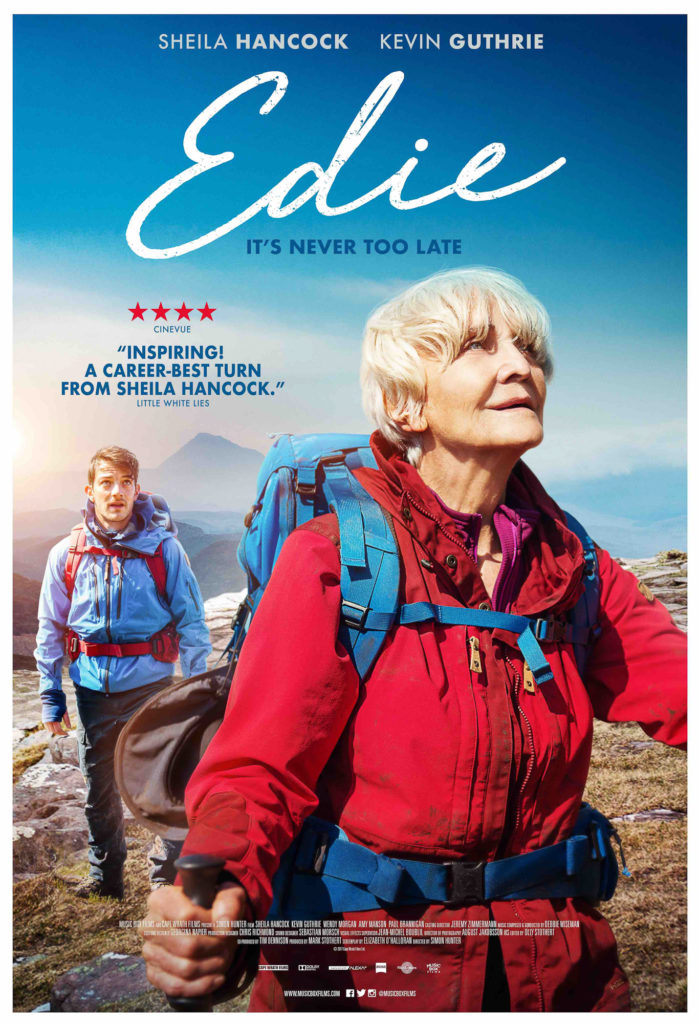 EDIE – A Review by Cynthia Flores

I hate it when they use much younger actors and actresses for lead roles that are about being a woman of a certain age.  So I’m glad and impressed with the film Edie choosing to use an age-appropriate actress.  Director/co-writer Simon Hunter did a great job casting Sheila Hancock who was eighty-three at the time of shooting this heartwarming film.  She’s a robust eighty-six now and is still going strong acting on stage and screen.

The film tells the story of Edie and shows how three years after the death of her controlling bed-ridden husband nothing has changed.  Her only daughter Nancy (Wendy Morgan) is forcing her to sell the house and move into a nice but boring assisted living facility.  Going through the boxes of her stuff Edie finds a postcard from her father that she used to go camping with.  It has a picture of the world-famous Mt. Suilven in the Scottish Highlands which means “The Pillar” when translated from the Norse language.  On the postcard, he wrote to his then distant daughter, “I found your funny-looking mountain.  Let’s climb it for old times’ sake.”  That old, found postcard is the impetus that she needs to break free from thirty years of living and caring for a controlling and cruel husband.  Believing it’s never too late, Edie embarks on the adventure she and her father had always longed for, to climb that mountain.  Along the way, she hires young camping shop worker Jonny (Kevin Guthrie) to be her guide.  Despite the generational differences between them, Jonny encourages Edie to fulfill her dream.  Some of my favorite parts of the film center around their unlikely friendship against the stunning backdrop of the Scottish Highlands.

There are no green screens or studio set-ups for this project.  Simon Hunter directed the film on location in Scotland.  Sheila trained for weeks in the gym and got used to her Hanwag Mountain boots that her character was to wear in the movie.  Her training paid off.  At the age of eighty-three, she worked fourteen-hour work-days shooting this film.  Worked six days a week for five weeks straight some of that time in the rain.  Then did a fourteen-kilometer hike followed by camping out in the wilds for two nights then climbing one of the steepest mountains in Scotland.  I get winded just thinking about it.

Edie is a life-affirming film that I give a B+ rating.  I hope you seek it out in theaters or at home once it’s on VOD you’ll be glad you did.