For the most part, I’m going to stick to delivering as many review versus writing about my exploits here in Toronto, but I had a film festival geek moment early yesterday morning: I’m speed walking to my first press screening of the day with Festworks’ founder Rose Kuo when we catch up to Chazz Ebert on the sidewalk. I point Chazz out to Rose and we both say hello. Chazz says hello to Rose and turns to me, searching my face for my name. I say, “It’s John…Wildman.” And she immediately exclaims positively, “Yes, Wildman!”

So, maybe not with the facial recognition yet, but the “Wildman” part stuck with Chazz. And I am very happy to take that from that cool as hell person.

And now the reviews….

Ana Lily Amirpour’s THE BAD BATCH follows Samantha (Suki Waterhouse) as she is being tattooed with an ID number and left outside the security gate protecting what is presumably left of the civilized world from..uhmm…everything else that is out there. She has been deemed part of “the bad batch” – people with nothing to contribute to society. And what is out there is an endless stretch of unforgiving desert with a two enclaves we quickly learn about – one, called The Bridge where a community of weightlifting cannibals reside, and two, The Colony, which seems to be the “island of refuge” for everyone else. Our girl, barely survives her encounter with the first, and not before literally paying an arm and a leg to get out of there.

She is then found by an old desert codger (an unrecognizable Jim Carrey), who drops her off at the second. She eventually finds herself an uneasy fit in their confines, and while exploring the area just outside the protective confines of The Colony’s walls ,she encounters the woman and little girl of “Miami Man” (Jason Momoa). After an altercation, she brings the child back to The Colony, and subsequently loses her to a Jim Jones-­‐type leader Rockwell, (Keanu Reeves), who preaches the gospel of “living the dream” from the top of a giant boom box with a DJ spinning records for a psychedelic-­‐infused rave, while surrounded by a bevy of gun-­‐toting pregnant women wearing t-­‐shirts proclaiming “the dream is inside.” Yep, that’s the future. And Samantha, the Miami Man, and Rockwell are on a collision course to see who will survive it and on whose terms.

Whatever you would want to say about THE BAD BATCH, you can not make a claim that the film is lacking for vision – both conceptually and visually. Samantha’s discovery and survival each step of the way ranges from shocking to surreal to absurd to straight-­‐up WTF. But the film also confounds expectations of watching a young woman being groomed by the harshest of circumstances and environment to be a ruthless badass. Samantha is drawn as a street urchin skateboard girl and remarkably – and potentially to the disappointment of the Tarantino-­‐esque expectation we might have ingrained in us by this point – she stays true to that to the end.

There, frankly, doesn’t seem to be any desire to go to a lot of depth as far as what we think this vision of an unforgiving and practically unlivable future will be – which is fine. However, there is also a fascinating pulling back (at least on the surface) as to the extremes that survival question leads the characters in the film. For example, Reeves’ Rockwell may strike some as a missed opportunity given the presentation of his character. On the whole, the film delivers a lot to look at and enjoy as long as one doesn’t try to impose their pre-­‐conceived rules of the apocalyptic future to the film before it begins. 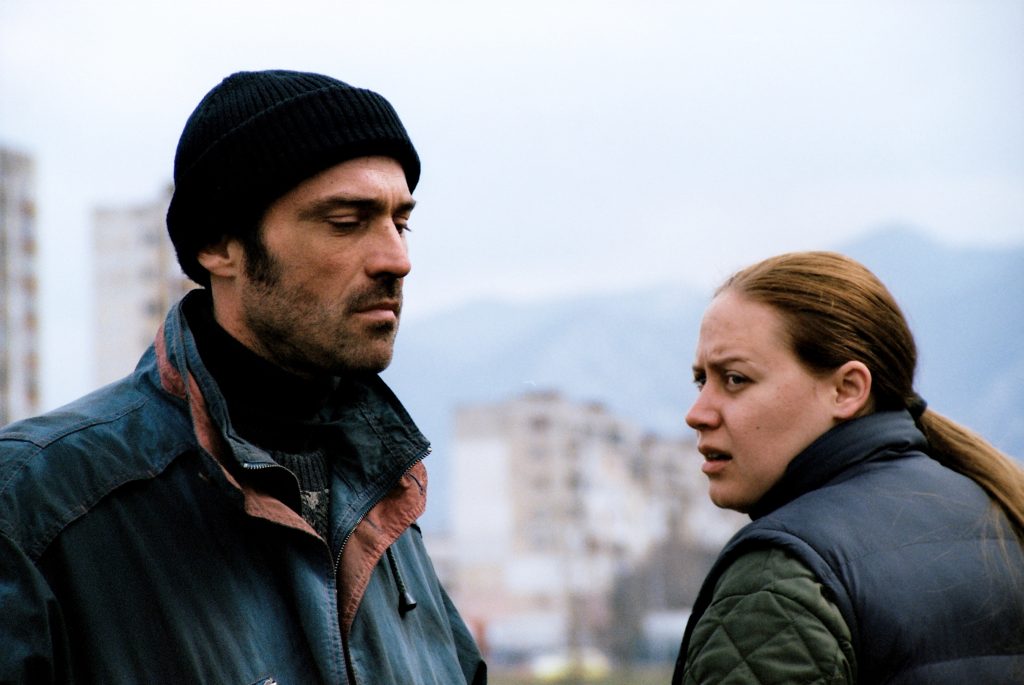 Ralitza Petrova’s GODLESS focuses on Gana, a home-­‐care nurse in post-­‐Communism Bulgaria, who supplements her meager income by selling her elderly patients’ ID cards to criminals that use them to set up sham companies. Dulling the pain of her joyless life by helping herself to the morphine supplies at her company, and stuck in a loveless relationship with her mechanic boyfriend and co-­‐conspirator, Gana lives simply to survive and exist until she encounters a new patient, Yoan. It is through her conversations with the retiree, and watching – and more importantly -­‐ listening to him conduct his choir, that Gana begins to see a glimmer of light in what she calls her life, and thus start her off on a journey to question the morality of what she has been doing to sustain it.

By its basic description, GODLESS sounds much like the joyless, relentless slog that it’s central character has been enduring. And admittedly, while a first glance, surface assessment would make it hard to deny that, there is something else at work that inspired the Locarno Film Festival to make the film an award winner. Through the unblinking eyes of her protagonist, Gana, Petrova forces the viewer to confront the realities of her characters’ bleak lives in much the same way she does in order to fully realize the potential impact of her realization. The thought that the beauty of a choir and the act of singing could have on someone that is “lost” is profound, and maybe doesn’t lend itself to feel good cinematic short cuts. Is the exploration of that idea executed in this way for everyone? No, it most definitely is not. This is not a film for your garden variety multiplex movie watcher. However, for fans of recent Romanian and Bulgarian cinema that routinely delves into these morality plays on a stark, minimalist level, this is another very solid addition to that wave. 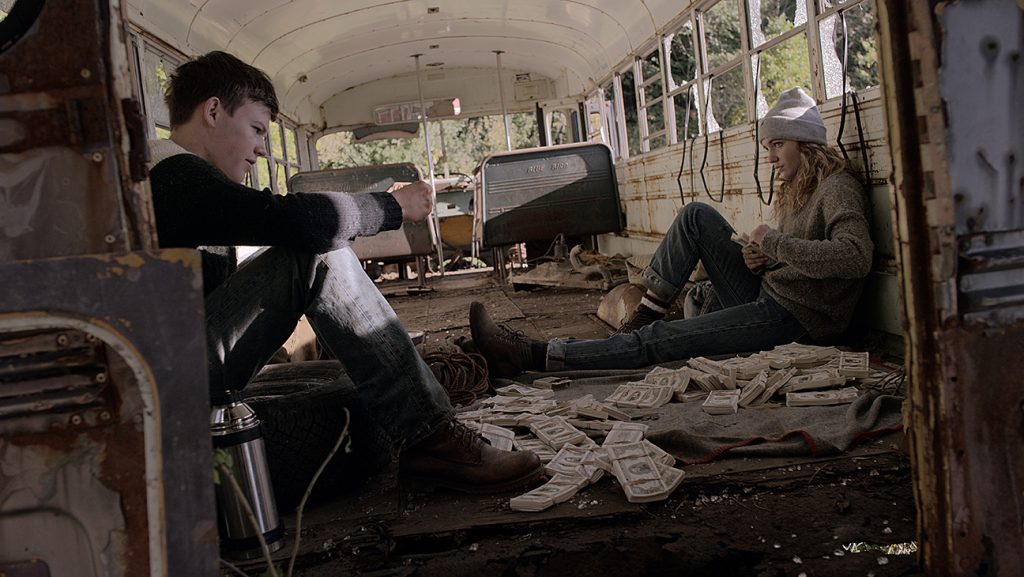 Nathan Morlando’s MEAN DREAMS offers up a pretty classic story of star-­‐crossed young lovers. The film opens as farm boy Jonas is releasing a rattlesnake out into the woods around the same time that country girl Casey and her police officer daddy are moving into the place neighboring Jonas’s family’s farm. The two quickly meet and form a fast friendship with a first love on the horizon when it is revealed to us (and soon, Jonas), that Casey’s dad (an effectively threatening Bill Paxton) is not only abusing her, but is also on the wrong side of the law despite the badge he wears. Jonas’s parents aren’t prizes themselves, so the two young people quickly accept they only have each other to rely on – and even then, Casey is fearful that Jonas has no idea the hornet’s nest he is poking at by confronting her father. However, the combination of Jonas being pure-­‐of-­‐heart, some bad timing and good intentions lead to Casey and Jonas facing a life and death struggle against her father.

MEAN DREAMS not only isn’t trying to reinvent the wheel, it revels in the trappings of its poor, farm country setting, story tropes, and the familiar character archetypes it puts forward. The film banks on the romantic dynamic between the two leads Josh Wiggins, Sophie Nelisse, as well as the villain role embodied by Paxton which is smart as all three do not disappoint. By staying true to its tone, choosing simplicity and storytelling over any complex messaging, the film should appeal to audiences over a good portion of the country. 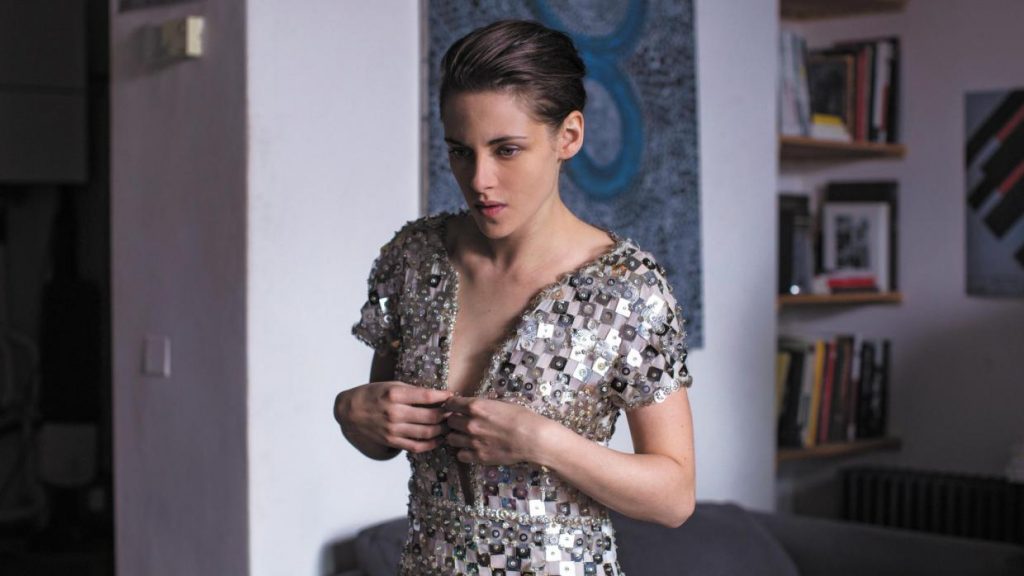 Olivier Assayas’s PERSONAL SHOPPER follows Maureen (Kristin Stewart) who is both a personal shopper for a high society, jet setting German model and designer, as well as being a medium who can sense and communicate with the dead. The film begins not long after the death of her twin brother, and Maureen is distracted from her job’s responsibilities by her desire and attempts to communicate with her brother. It makes for the oddest example of multi-­‐tasking as she divides her time between picking out clothes and delivering them to her boss’s place and first, visiting her childhood home in Paris, trying to connect with her brother’s spirit and then fearing that her efforts may have invited a much more sinister force into her world.

PERSONAL SHOPPER is an interesting meld of character-­‐driven art film and ghost story. The success of it in the viewer’s mind, likely depends on one’s fascination with Stewart and/or the draw of Stewart’s on-­‐screen charisma (or perceived lack of it) versus a love of the horror genre. As what frequently happens when a director not accustomed to doing horror decides to play in that sandbox (see Barry Levinson’s THE BAY, for example), there is a distinct impression that the filmmaker believes they are “slumming” and aren’t that interested in delivering audience  hoped for thrills and chills. Therefore, this is not the film you are looking for if you want to be scared. Rather, it is an intellectual exploration in our obsessions with celebrity and artifice and how that extends to our personal, self-­‐reflected obsessions – and vice versa. A film to ruminate over later, versus grip your seat and cover your eyes in terror.

THINK LIKE A MAN TOO By Gary Murray Starring Kevin Hart, Regina Hall and Meagan Good Written by Keith Merryman and David A. Newman…