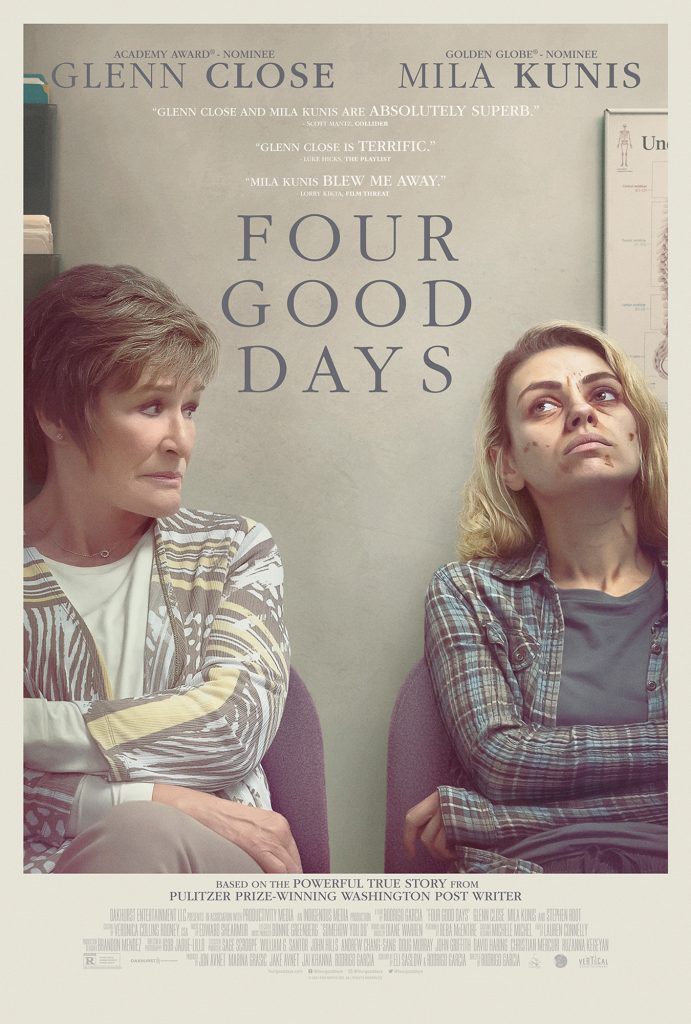 I get to use a new phrase today, “Trigger Alert.” The new film Four Good Days is a brutal and needed portrait of drug abuse. It will upset its audience. It’s based on the true 2016 story by Pulitzer Prize-winning, Washington Post writer Eli Saslow titled “How’s Amanda? A Story of Truth, Lies, and an American Addiction.”

If the statistics are correct from the NIH (National Institutes of Health) and the CDC (Centers for Disease Control and Prevention), from 1999–2019, nearly 500,000 people died from an overdose involving any opioid, including prescription and illicit opioids. With that many people dying from this affliction, then odds are you or someone you know has dealt with an addict. So, when you watch this brilliant film, have tissues nearby and be ready to be punched in the gut by the fantastic performances of Glenn Close and Mila Kunis.

Four Good Days tells the story of Deb (Glenn Close) and her thirty-one-year-old daughter Molly (Mila Kunis). The story starts when Deb gets a surprise visit from her daughter. Deb is not happy about the visit. Instead, she’s terrified at the awful state Molly is in. For a good reason, Deb initially refuses to let Molly into her home. Molly is a drug addict with a decade-long history of failed detox programs, who repeatedly swore she wanted to get better but then lied to and stole from the family. Molly literally begs her mother, Deb, for help fighting against the drugs that have derailed her life. Despite all her mom has learned and lost over a decade of disappointment, grief, and rage, Deb relents. And throws herself into one last attempt to save her daughter from the grip of drug addiction. An addiction that started when she was seventeen years old with a sports injury and her doctor prescribed seventy-five opioids with lots of refills. Now Molly is willing to enroll in a new form of treatment that doctors consider her last and best chance to get clean. It is a monthly shot of a drug called naltrexone, which blocks the effects of opiates on the brain and makes getting high impossible. But the shot comes with dangerous side effects if she still has opiates in her system. To get the new treatment, she has to stop using drugs for the next four days, bringing her total to eight days clean. This film follows those days that Deb and Molly live through.

When asked why he wanted to do this film, Award-winning writer and director Rodrigo García stated that he saw it as an extraordinary opportunity to explore America’s opioid epidemic from a previously untapped perspective. He said, “More than anything else, this is a mother-daughter story that is both inspiring and heart-rending.” he goes on to say, “But the unique mother-daughter dynamic brought something beyond what we expected. I wanted to address questions that have no easy answers: Are you really able to ever shut the door on your child’s face, even if it’s presumably for their own good? When are you being supportive, and when are you an enabler? Is undying hope for your child’s recovery its own form of addiction?”

Garcia chose Glenn Close to play the worn-out mother, Deb. The actress starred in Garcia’s first feature film and collaborated with him on three more films over the two decades that followed including 2011’s Albert Nobbs, for which she was nominated for an Oscar and a Golden Globe. This film also gives Mila Kunis as Molly a chance to show off her dramatic chops. She is a known commodity as a comedic actress, but it’s been a long while since the film Black Swan showed us that she can nail drama as well. She sheds her trademark glam beauty and wears the rotted skin and bones of a drug addict for this film. Her big dark eyes communicate the complications of Molly’s inner life while breaking her mother’s heart.

I give Four Good Days a 4.5-star rating. It’s a mirror of the emotional roller coaster of hope and codependency that millions of American families face daily.

Limited Theatrical Release: April 30th at Cinemark theaters- Legacy and XD, Tinseltown grapevine and XD, Roanoke and XD and VOD on May 21st