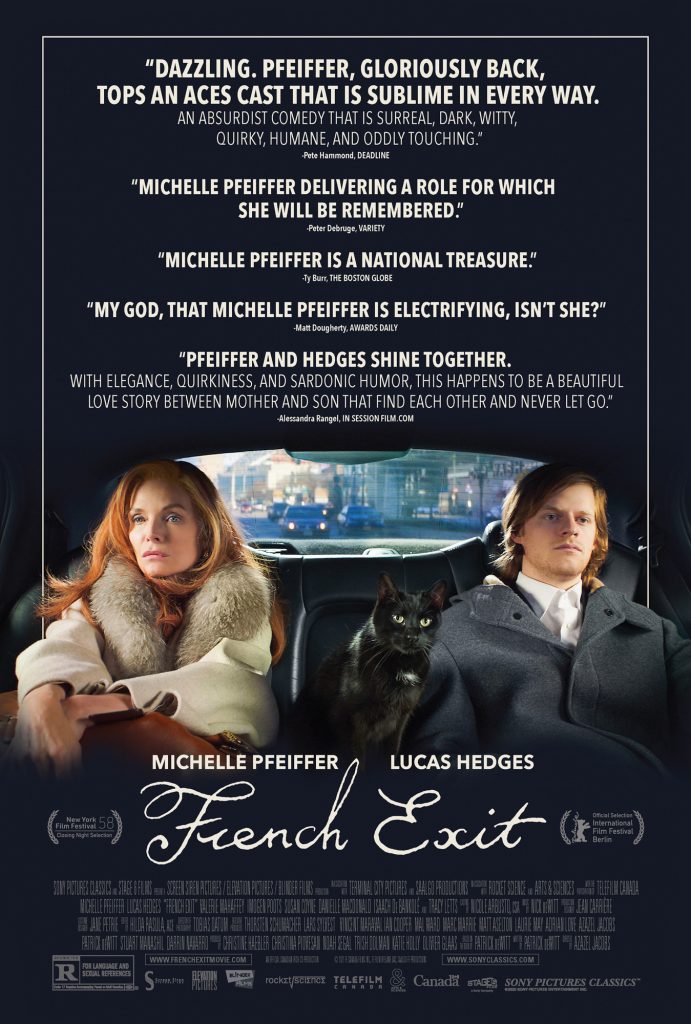 This new film, French Exit, by New York-based director Azazel Jacobs, is a dry and often witty piece of filmmaking. Its pacing and deadpan humor are aimed more towards the arthouse crowd rather than the masses that choose movies that go BOOM!

The script was adapted by Patrick DeWitt. He is the author of the brilliantly absurd and darkly comic hit novel the film is based on. This is the third book he has adapted for the screen. The last one in 2018 was one of my favorite films for that year, called The Sisters Brothers. His gift of writing complex characters with witty, conversational patter is fun to watch.

In this movie version of French Exit, we get to meet Frances Price (Michelle Pfeiffer), a now penniless sixty-year-old Manhattan socialite. Dealing with her life as it stands now. As she says in the film to her accountant, “My plan was to die before the money ran out.” Unfortunately for her, things didn’t go as planned. Now she and her unusually emotionally dependent grown son Malcolm (Lucas Hedges) have to sell their possessions and cash out. She accepts the offer of a free apartment in Paris from her only true friend Joan (Susan Coyne). Frances decides to live out her twilight days quietly as an expatriate far from her beloved New York City. She is accompanied on this trip by her son, a big bag of cash in stacks of euros, and a black cat named Small Frank – who may or may not embody the spirit of Frances’ dead husband Frank (Tracy Letts).

That is the meat of the storyline. There are, of course, others in the mix. Such as Susan (Imogen Poots), Malcolm’s fiancé. She has had it with his inability to tell his mother about their plan to marry and leaves him. Then there is the former New York native and now a widow herself, Madame Reynard (Valerie Mahaffey). She reached out in friendship to Frances and Malcolm once they settled in Paris. And let’s not forget Madeleine the Medium (Danielle Macdonald). Malcolm meets and beds her on the ship they sail to Paris on. She is the real deal and can talk to the dead. She will come in handy later in this odd story about Frances’ final soiree.

As a compliment, I would say that French Exit has the tempo and feel of Wes Anderson’s films. It has the zaniness of 2009s Fantastic Mr. Fox mixed with the mockery of opulent wealth from 2014’s Grand Budapest Hotel. Unfortunately for French Exit, this film lacks the magic Anderson can consistently put on the screen with his movies. Don’t get me wrong, the ensemble cast are all brilliant in their parts. Also, it’s a lot of fun to watch Michelle Pfeiffer chew up the scenery as the contemplative socialite who seems to do everything she can to bring an end to her story. But, even with such a seasoned cast, the way the director handled some twists in this story was jarring. It just seemed to throw a wrench into what should have been a perfectly tuned machine.

I give French Exit a 3.5-star rating. For fans of Michelle Pfeiffer, it’s worth watching. For everyone else, just catch it once it is available VOD.