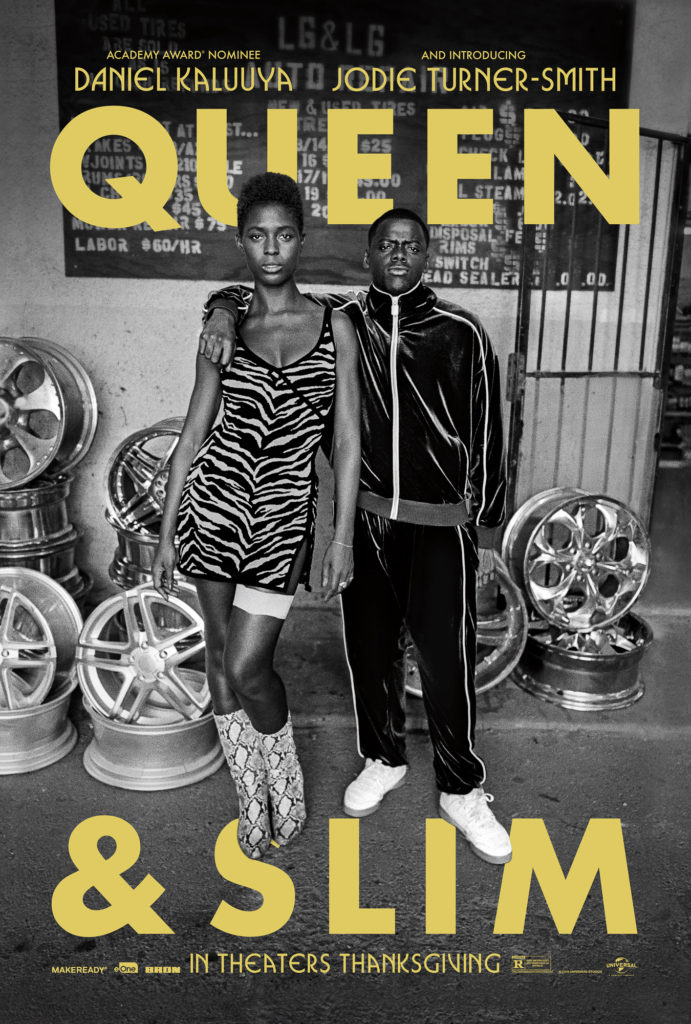 Queen & Slim stars Daniele Kayluuya from the movie, Get Out, and Jodie Turner-Smith, in her first feature role.  Both actors are excellent in a tale about a young African-American couple who are on the run from the police after the young man, Slim, shoots and kills a cop when a traffic stop goes horribly wrong.

With the young couple on the run from the law, the film has drawn many comparisons to the classic movie Bonnie And Clyde.  However, in Bonnie And Clyde, the criminal’s reputation was spread by headlines and by word of mouth.  This modern movie is driven by social media as the two criminals become cult heroes through a viral video.

At the heart of the movie is a love story about two people who have a tragic incident that occurs to them while they are out on their first date.  The two couldn’t be any more different.  Queen is a socially active defense lawyer who doesn’t believe in God and Slim works as a cashier and prays before every meal.  After the incident, Queen directs Slim to drive them to New Orleans where she has a shady Uncle Earl, played by Bokeem Woodbine, who lives in a house filled with “working girls.”

The movie is an excellent story dripping in reality.  It seems like every scene in the movie could have come from the experiences of African Americans in this country.

The movie-making team of writer Lena Waithe and director Melina Matsoukas have made a movie that is a real slice of life that shows the prejudices that a young black couple goes through on an everyday basis.  This film will make you feel strong emotions, whether you are a straight-out racist or a minority member whose real life consists of these kinds of experiences every day.  It is a very moving piece of art.

The movie is rated R for some very graphic violence and a very steamy sex scene that had me blushing during the movie.  It has a run time of 2 hours and 12 minutes.  On my “Hollywood Popcorn Scale” I rate Queen & Slim a JUMBO.

Harry Shearer of The Simpsons and Le Show talks to Gadi and Liz of Selig Film News about his career. He is in Dallas…