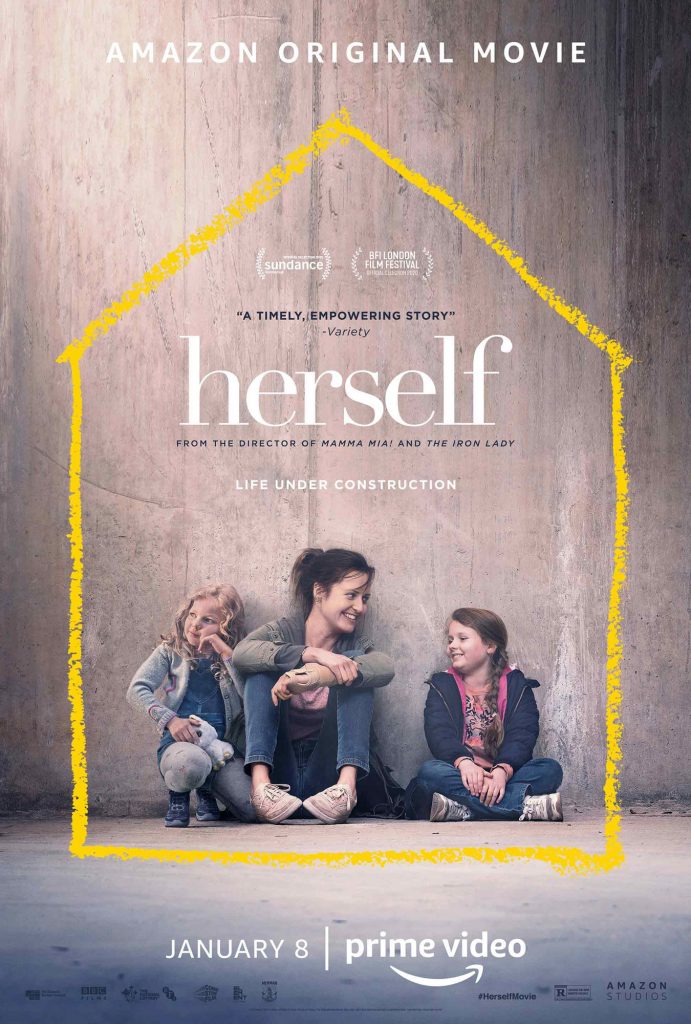 HERSELF – A Review by Cynthia Flores

I like to champion films made by women, and good movies make it all that much easier. Herself is directed by Phyllida Lloyd and was co-written by its star Clare Dunne. It comes from an idea Dunne got after her friend, a mother of three who left an abusive situation, had to declare herself homeless to get assistance from the Irish government. She is quoted as saying, “I remember feeling so angry and frustrated and thinking, everything about this situation is wrong. Mortgages and sky-high property prices are a mirage.” The situation played on her mind over the next few days. Then the idea hit her like a lightning bolt. “What if a woman said, ‘I’m going to find a bit of land, I’m going to build a house.’ It’s just bricks and wood, after all. I Googled ‘self-build Ireland’ and discovered an Irish architect called Dominic Stevens. He had built a house for himself for an affordable price. That was the beginning of all of this.”

Herself tells the story of single mother Sandra “Herself” (Clare Dunne), who escapes her abusive husband Gary (Ian Lloyd Anderson) after a particularly rough beating. She and her two young daughters, Emma (Ruby Rose O’Hara) and Molly (Molly McCann), are trapped in temporary accommodations. After months of struggling, she gets an idea from one of her daughter’s bedtime stories. She googled self-building and affordable home and found an architect named Dominic Stevens (Himself) who has done it himself. He provides her with the plans and she is offered land to build on by Peggy (Harriet Walter). Peggy’s a woman her mother used to clean for and now, Sandra does. Peggy knows what Sandra has been through and loans her the money it will take to build the house.

After hitting a few stumbling blocks, she meets a building contractor named Aido (Conleth Hill) at a supply store. With nothing to lose, she asks him for his help on her project. He has worked with her ex, and against his misgivings, he decides to help her too. They only work on the project on the weekends but reach a point where they need more free help. So, Sandra must swallow her pride and ask the people she knows at work and a school mom for help. As all this is going on and her home is taking shape, her possessive ex uses the bureaucrats to fight her for custody of the girls. Will Sandra be able to rebuild her life literally from the ground up? You will just have to watch it to find out.

Herself was filmed in Dublin, Ireland, so you have that lush green landscape on view. It can sometimes be a difficult story to watch, but there is also so much hope woven into it. The film is not just a sad story full of lows and difficulties. It also celebrates Sandra’s inner strength. She is a proud woman, and at times, it’s hard for her to accept the help offered.

I give Herself 4.5-stars. It’s a beautiful film that shows that there are still good people out there that will come together to help someone else.