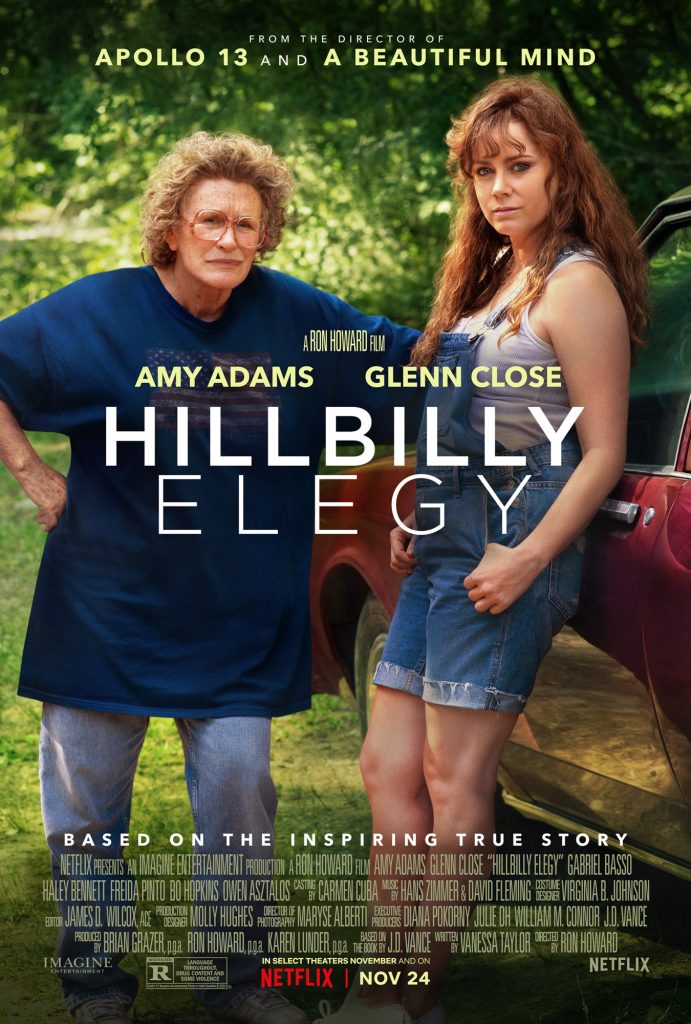 Each year around this time we’re lucky enough to get the outstanding films of the year. The ones that are Academy Award nomination contenders due to their exceptional example of great storytelling. We sit through many silly and outright bad films during the year to get to these memorable movies. Hillbilly Elegy has a place on the top of that best of the year list of 2020.

It’s based on J.D. Vance’s powerful #1 New York Times best-selling memoir. It has Hollywood royalty behind the camera telling this story. It’s deftly helmed by Academy Award winners Brian Grazer (Producer) and Ron Howard (Director). The ensemble cast led by Amy Adams and Glenn Close is brilliant. Both women have multiple Academy Award nominations without any wins. This film may change all that.

Hillbilly Elegy tells the true story of J.D. Vance (Gabriel Basso / young J.D. is Owen Asztalos). He’s a former Marine from southern Ohio and now a Yale law student. He is working his way through college and leveraging any grants that will help him pay for school. He has an amazing college girlfriend, Usha (Freida Pinto). She helps him navigate the upper-class rituals of an ivy league school. He’s also on the verge of landing his dream intern job, and this is precisely when he gets a call from his sister Lindsay (Haley Bennett) telling him that he needs to come home right now. His mother, Beverly (Amy Adams), has overdosed on heroin and is in the hospital. He dutifully drives back to a home he had tried to forget.

You see, J.D. comes from an Appalachian family with complex issues that are steeped in poverty. It’s not just the kind of poverty marked by a lack of money, but the type scarred by a lack of hope and decimated by drug use. The film shows the volatile relationship between J.D and his mother, Bev. She is struggling with addiction, anger management, and poor choices in men.

J.D.s’ anchor and saving grace in his life was his grandmother Mamaw (Glen Close). She was resilient, tough, and smart. She was the woman who actually raised him. Her love made him the good man he would become. The Vance family story explores the highs and rock-bottom lows of this amazing family as they try to break free from generational hardships. This story may be specifically about this Appalachian clan, but its universal appeal is rooted in its promise of healing and hope.

I give Hillbilly Elegy a 5-star rating. I’d give it more stars if I could.