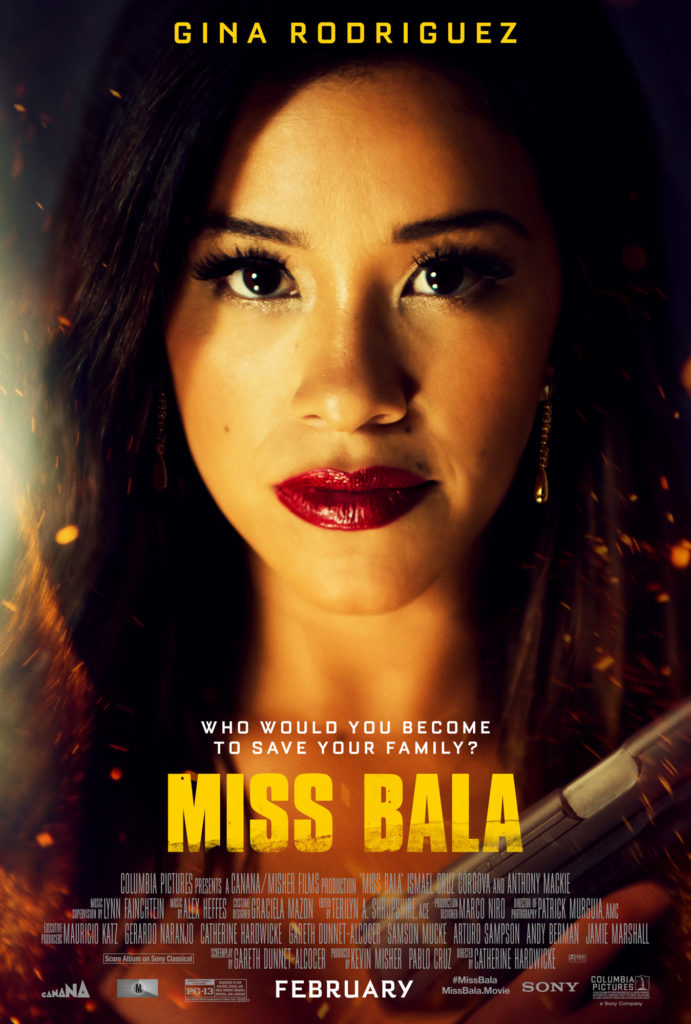 Calling all Latinos and people that want to see brown faces on the big screen.  That means we have to have brown people’s butts sitting in the movie theater seats, especially on the opening weekend.  Hollywood will make more and possibly better films with Latin casts if the crowds show up.  I am sure that the makers of this American version of Miss Bala, which is loosely based on the 2011 Spanish language film of the same name, are hoping to capitalize on the large fanbase of Gina Rodriguez from her TV show Jane the Virgin.  Well if you loved her as the sweet Jane from the series, you will be pleasantly surprised by her portrayal of Gloria Meyer, a makeup artist from Los Angeles who, while visiting her best friend Suzu (Christina Rodlo) in Tijuana Mexico, runs into trouble by being at the wrong place at the wrong time.

Suzu is competing in the Miss Baja beauty pageant to win ten thousand dollars and convinces Gloria to go with her to a night club where a famous General hangs out.  He has considerable sway over who wins the pageant because he likes to sleep with the winner, so Suzu wants to get on his good side.  Gloria goes to the restroom leaving Suzu chatting up the General in the VIP area.  While in the ladies room she sees a gang of men break in through the air-conditioning vents.  They are part of the La Estrella gang lead by Lino (Ismael Cruz Cordova), there to assassinate the General and some of the dirty DEA feds that work for him.  Lino threatens Gloria after he looks through her identification and realizes she’s an American who might come in handy later.  He tells her to run before they break into the crowd and start shooting.  In the melee, Suzu and Gloria are separated.

Gloria tries to find Suzu the next day.  Calling hospitals and thinking that the cops can help she walks up to an officer at the crime scene and tells him that she’s a witness and can identify the men that shot up the nightclub if he can help her find her friend.  The dirty cop then takes her directly to Lino and his gang.  Once in his clutches, Gloria is forced to drive a car that eventually blows up a DEA safe house killing three agents, which puts her on the wrong side of some corrupt DEA agents.  So now Gloria is being threatened by the DEA agents to help them find Lino using a tracking chip.  All the while the gang uses her hope of finding Suzu and keeping her god-son safe as a reward for helping them smuggle laundered money for the drug cartel into the United States.

As the film progresses, Lino starts caring for Gloria and actually teaches her how to shoot the automatic weapon that he uses.  He explains to her that “La Bala” (which is the Spanish feminine noun for the word bullet) settles all disputes.  Everything comes to a head when Gloria is forced to be in the Miss Baja Pageant where the gang has bought all the judges so that she will win.  As the winner, she will have access to the General whom she is told to get alone in a room to seduce him so that Lino and his men can finally kill him.

During the film we watch Gloria go from a sweet, unassuming makeup artist to a fierce, hardened, smart woman that will do whatever it takes, including using La Bala, to save those that she loves.

La Bala is not the best action film I’ve ever seen, but it is good. You actually feel sorry for Gloria who can’t seem to catch a break and gets deeper and deeper into trouble at each turn. It also has one of the best soundtracks I’ve heard in a while. Plus, Gina Rodriguez proves that she can carry a feature film and is an intense action character actress. I hope to see her in more movies soon.  I give La Bala a solid B+ rating.

Smallville: The Complete Series 20th Anniversary Edition – Soaring Onto Blu-ray For The First Time Ever in October 2021