2020 has been a tremendously tragic and uncertain year in most of our lives.  The emergence of a deadly virus has divided our nation and impacted our world.  In times of uncertainty we look to those that have led or inspired us in our past.  One of those individuals for me has been journalist, columnist, TV host, and historian Robert Wilonsky.  I first read Bob’s work in the Dallas Observer and became an early lover of UnFair Park.  It was his writing that inspired me to “have” to work at the DO.  I ended up in sales, but that’s a different story.  This story is how my “side blogging” gained Bob’s notice and at the 2nd AFI Dallas Robert would give me a glowing nod of approval.  For those that know him, his booming voice has a way of seeming to be heavenly sent.  So when he says “keep up the good work you’re on the right path” you tend to listen.

Back to 2020 and our shared quarantine lives.  I decided I need to catch up with Bob.  He recently had left the Dallas Morning News to become the communications director of Heritage Auctions.  This move had surprised many of us Dallas folks and had us wondering why the long time journalist was putting his pen down.  So I got in touch with Bob about chatting about the move, Co-Vid 19, and about his long history of journalistic work.

Here is my chat with journalist, columnist, and good friend Robert E. Wilonsky.

*his audio takes a second to pod up.

**You’ll quickly hear that when you chat with Bob he controls the conversation!

Part two is brief but does have the rare reflection from Bob about his UT Austin days working at The Daily Texan. 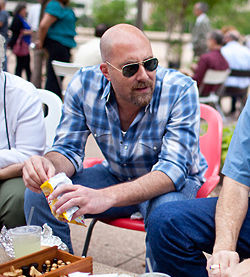